Dana White has said that Henry Cejudo should defend the flyweight title against Joseph Benavidez next, but the champ-champ continues to push for a title defense at 135.

As it stands right now, there’s no bout scheduled for an interim flyweight title fight. But, increasingly it’s sounding like that may need to happen, or that Henry Cejudo will not in fact, defend that belt again. 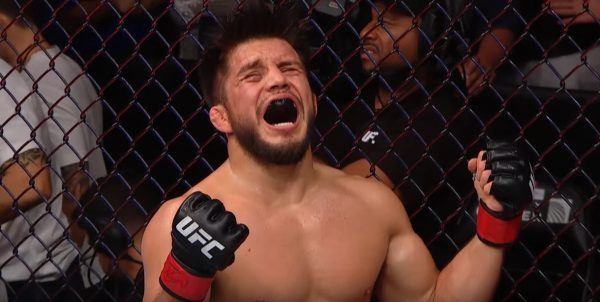 Cejudo’s hopes for his next bout

After Cejudo won the bantamweight title this past June by stopping Marlon Moraes at UFC 238, the decorated wrestler was quick to call out other, notable 135’ers like Urijah Faber, Dominick Cruz and Cody Garbrandt. Since then, Cejudo has continued to distance himself from defending the 125 title, even though Dana White has argued the decorated wrestler should defend it against Joseph Benavidez next.

Benavidez defeated Cejudo back in 2016, and by the time the latter’s ready to fight again, it will be over a year since he defended the 125 belt. Cejudo, who has been sidelined more recently due to shoulder surgery, defended the flyweight title in January, 2019, by quickly stopping T.J. Dillashaw.

Cejudo says he has “leverage” over White

Well, as 2019 winds down, Cejudo continues to distance himself from fighting at 125 next. Case in point, during a recent appearance on Brendan Schaub’s “Food Truck Diaries“, Cejudo said this (quotes via MMA Junkie):

“Dana can say what he wants, and he’s the president and what not, but when you own two weight classes, when you have some kingdoms, I think I have the leverage,” Cejudo said. “No one’s going to force me to fight someone that I don’t want.

“I like Frankie Edgar. I like the Dominick Cruz right now,” Cejudo said. “That’s what’s jumping at me. As much as Joe does have a victory over me … but at the end of the day, it’s cutting the weight, man – especially being up at ’35 and then feeling good, and having a good camp, and just being more happy. Be more happy, literally – like, I cut 25 pounds to get down to ’25.

So, ya. If you’ve followed White over the years, then you maybe kind of surprised to see Cejudo’s take here.  Of course, having Cejudo as a champ-champ provides a great promotional angle.  But, it would be pretty surprising if White reversed course and let Cejudo defend the flyweight title in say, summer, 2020. In other words, maybe we’ll see Benavidez fight Devieson Figueroa for the vacated flyweight title in Q1, 2020? If Cejudo doesn’t commit to defending that belt in not too distant future.