Not everyone in the Montevideo crowd last night was thrilled with the headliner for UFC Uruguay, but Valentina Shevchenko is happy with how she performed.

At several points during last night’s bout between Liz Carmouche and Valentina Shevchenko, it was clear some members of the Montevideo crowd weren’t exactly thrilled with how the fight was unfolding. But, following UFC Uruguay, the flyweight champ Shevchenko defended her performance. 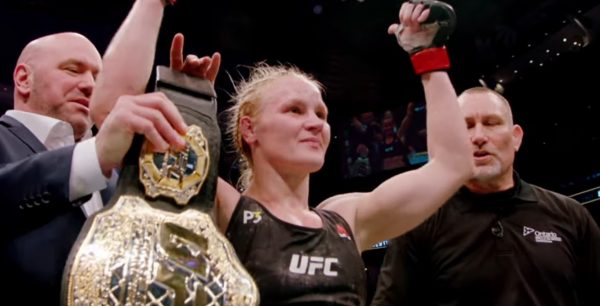 From the get-go in the card’s headliner, neither Shevchenko or Carmouche came out firing on all cylinders. Much of the bout saw Carmouche looking to land counter strikes, and when she did shoot in on the champ, she failed to secure the takedown. Shevchenko, meanwhile, pressured for much of the fight, but her striking volume overall was quite low. After five rounds, Shevchenko had outscored Carmouche in significant strikes by a 42-18 margin. But, the challenger landed more strikes overall: 132 to 84.

At the end of the day, Shevchenko is happy

Although the fight didn’t feature many memorable exchanges, after the fifth round ended, it was clear Shevchenko would be awarded the decision win. Following the bout, the renowned champion had this to say about the crowd’s reaction, and how she performed (quotes via MMA Fighting):

“First of all, of course I’m happy with my victory. I’m very happy to have the belt here and not somewhere else,” Shevchenko said. “My opponent, she has her strategy for the fight. She wanted to put me under her game and my goal was not to be [caught] by her game and put my game on top of her.

“My goal was to not give one moment to her and put my game on top of hers. This is what I was doing.”

“I think if all fans, people will start to watch more carefully the fight, they will see very beautiful technique and timing and speed and this is all about martial arts. Not only about crazy exchanges, you can be hit or you can lose much more because as I said, you have the belt or you don’t.”

There you have it, and really, Shevchenko should be just fine with how the bout went. She fought smart throughout the fight and defended her title. The saying may be overused, but styles make fights, and sometimes that results in a conservative, slow-paced bout.

Shevchenko has defended the 125 title twice now, since she defeated Joanna Jędrzejczyk last December to win the belt.

UFC 251: Winners, Losers And What Comes Next