It looks like Kron Gracie will face one of the UFC's most experienced and well rounded featherweights next.

Following his impressive Octagon debut this past February, it looks like Kron Gracie’s been tapped for a bout with longtime, featherweight contender Cub Swanson. 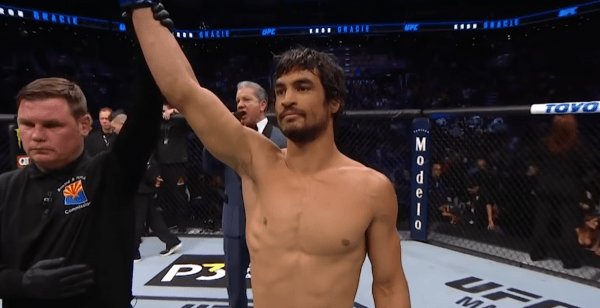 After going 4-0 to begin his MMA journey, Gracie signed with the UFC last year and faced the always tough, Alex Caceres at UFC on ESPN 1. The galaxy class grappler proceeded to submit Caceres in just over two minutes with a rear-naked-choke.

Well, now ESPN is reporting that the UFC is close to finalizing a bout between Gracie and Swanson for October 12th. No venue or location has been set for the card.

So, while Swanson (25-11) has lost four straight fights and is no longer ranked in the featherweight top 15, this is still a big test and opportunity for Gracie. After all, Swanson’s losses during that time have come against top tier fighters like Frankie Edgar, Brian Ortega, Renato “Carneiro” and most recently Shane Burgos.

If Gracie can win, then a top 10 featherweight could be next for the 30-year-old son of Rickson Gracie.