Beloved WII Statue Vandalized With ‘#ME TOO’ Marking

A statue honoring the legendary photo of a World War II soldier kissing a female nurse upon hearing that the war was over was vandalized early Tuesday morning with the hashtag #MeToo spray painted on it in red paint.

CBS News reported that police in Sarasota, Florida were called to the Unconditional Surrender statue just after midnight and found that the spray paint covered the nurse’s leg.

“The approximate damage is estimated to be more than $1,000 due to the large area that the graffiti covers, and the resources needed to repair it,” a police spokesman said. 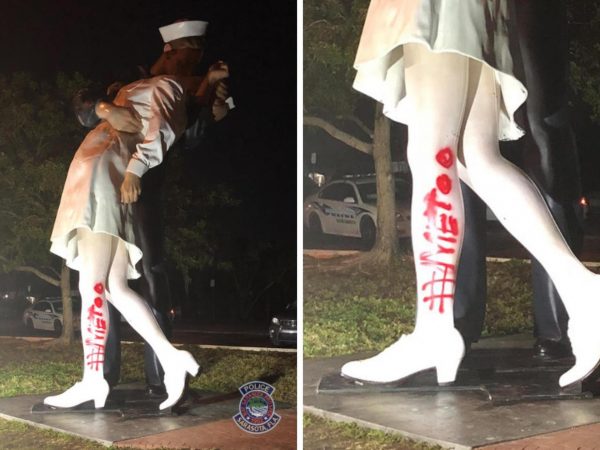 The vandalization was done just hours after George Mendonsa, the sailor in the legendary photo, passed away two days before his 96th birthday. The woman in the photo was Greta Zimmer Friedman, who passed away in 2016. The image became one of the most famous photographs of the twentieth century, with many from that generation saying that it perfectly summarized their feelings about the war ending.

“It was the moment that you come back from the Pacific, and finally the war ends,” Mendonsa said in a 2012 interview.

In recent years, however, liberals have criticized the photo as offensive in light of the #MeToo era since Mendonsa has admitted that he was drinking at the time and did not know Friedman.

“I did not see him approaching, and before I know it, I was in this vice grip,” Friedman once said.

Despite this, Friedman herself did not seem to have a problem with her role in the photo.

“It was just somebody really celebrating,” Friedman said in 2005. “But it wasn’t a romantic event. It was just an event of ‘thank God, the war is over’ kind of thing because it was right in front of the sign.”

Why is it that liberals insist on finding a way to be offended by literally everything these days? That statue symbolizes one of the most incredible moments in the lives of a generation of young people who had fought in World War II. That generation knows of sacrifice in a way that snowflake millennials never will, and they deserve our respect for that.

Shame on whoever vandalized this statue, and we hope that when the police catch the snowflake who did it, they throw the book at them.