Bounding Into Comics
/
by Ryan Pearson

This will be players’ second chance to encounter this Tera Raid Spotlight, and it’s not one you’ll want to miss. Cinderace — and, by extensions, its prevolutions Scorbunny and Raboot — cannot be caught in Pokémon Scarlet & Violet. The event will only run from January 13th to January 15th, so make sure you download the event via Poké Portal News.

Once you do, you’ll need to scour the land for a 7-Star Tera Raid Battle (look for the Black Tera Raid symbol on your map with the Fighting-Type icon in it). The highest in-game is 6-Stars outside of special events like this, essentially taking the slot of a 6-Star Raid.

As such, you’ll need to unlock 6-Stars Raids by beating the Academy Ace Tournament in the post-game, and having beaten ten 4 or 5-Star Tera Raid Battles.

Another wrinkle is that you can only fight the battle once per real-world day; as far as the Nintendo Switch’s clock is concerned, at least. But, you can join 7-Star Raids online after you’ve hit your daily limit, and even join a friend even if you don’t have them unlocked via their Link Code.

How To Beat Cinderace

Once you find a black Tera crystal den, that’s where Cinderace lies! On top of it having absolutely bonkers stats thanks to be a 7-Star Tera Raid Battle, Cinderace is fast and deals high physical damage. By default, Cinderace is a Fire Type, but here it’s a pure Fighting-Tera Type.

If it’s anything like last-time, it will be armed with the moves High Jump Kick, Pyro Ball, Acrobatics, and Iron Head. Thanks to the Same-Type Attack Bonus (STAB) of its original Fire typing, Pyro Ball still deals extra damage, along with High Jump Kick being boosted thanks to being Tera-Fighting. 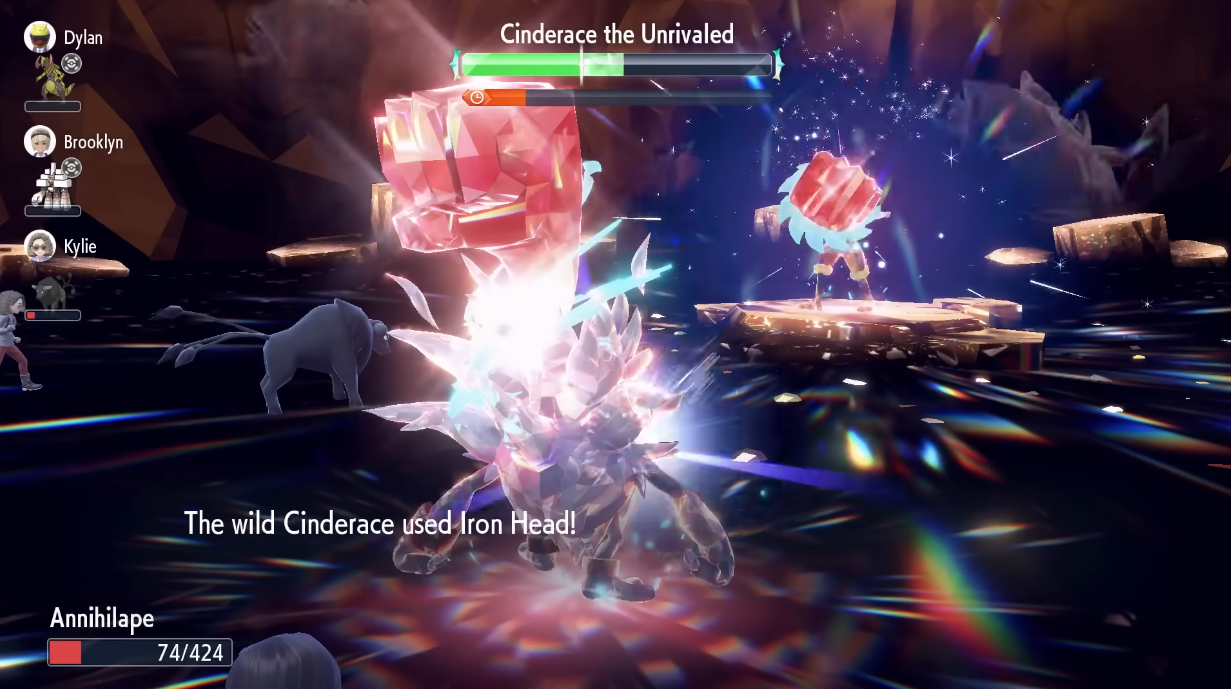 Acrobatics and Iron Head aren’t love-taps either. Acrobatics deals extra damage because the Cinderace isn’t holding an item, and Iron Head can make you flinch. Based on those four moves, Cinderace can deal Super-Effective damage to Normal, Grass, Rock, Ice, Bug, Dark, Steel, and Fairy Types.

Types that can resist one or more of those moves — and not take Super Effective damage from any of the others —  include Fire, Water, Flying, Poison, Electric, Psychic, Dragon, and Ghost. As a Fighting Tera-Type, Cinderace will take more damage from Flying, Psychic, and Fairy-type moves.

Tera Raid Battles allow the wild Pokémon to use more than four moves, however. In Cinderace’s case, it has Bulk Up. This raises it’s Attack and Defense by one stage — meaning its own attacks will hit harder, and your physical attacks will do less. With this in mind, there are several viable candidates for what to use.

The two other Pokémon more likely to appear in 5-Star Tera Raids are intended to be viable candidates for the battle — Tera Flying Gyarados and Tera Psychic Gengar — but they pale in comparison to Slowbro and Armarouge.

The plan is to max out your Defense with the move Iron Defense. While your opponent struggles to hurt you, buff up with Nasty Plot (for Slowbro) or Calm Mind (for Armarouge) until your Special Attack is maxed.

You then unleash Stored Power — a Psychic move that increases its Base Power with each stat boost — and the boosts themselves still multiply the damage. This can utterly obliterate Cinderace, and you may not even need to max out your Special Attack stat with it.

Carry a Life Orb for extra damage, max out your Pokémon’s EVs in Defense and Special Attack, and use Slowbro’s Slack Off to patch itself up if need be. Armarouge will need to rely on your Cheer, or an allies’ healing move, so fill its last slot with Clear Smog (to remove Cinderace’s stat boosts) or Reflect (reduce damage to allies) if things get dicey.

Slowbro’s ability doesn’t really matter, but Armarouge should use Flash Fire to make it immune to Pyroball. Tera-Psychic is your better option, but if you’re doing it right, you won’t even get the chance to Terastallize!

RELATED RUMOR: ‘The Legend Of Zelda: Tears Of The Kingdom’ May Be The Nintendo Switch’s Last Major First-Party Title

You can even rely on NPC allies with the above builds. Keep in mind that when the timer has about 60% left Cinderace will remove all your Pokémon’s stat boosts! All of the above moves (except Slack Off) are also learned by TM.

Should you be playing online, you can also build your Pokémon to be more supportive (maxing out HP and Defense EVs, along with the appropriate nature). Slowbro being a good candidate yet again, this time with Chilling Water (to lower Cinderace’s Attack), Psychic Terrain (to booster other Stored Powers), and even Yawn (set foes asleep). Though, to be honest, a team of Stored Powered Slowbro won’t need support.

Other good support Pokémon are several of the Intimidate users. Arcanine, Gyarados, Salamance, Staraptor, and (to a lesser extent) Luxray can all pack this Ability and, when they come back into battle after being knocked out, activate Intimidate again. Moves that can reduce its Attack are also a bonus.

Speaking of which, several moves of note include Will-O-Wisp, Chilling Water, Feather Dance, and Charm (reducing Cinderace’s Attack in their own ways), Acid Spray (lowering the foe’s Special Defense even while it has a shield up), Psychic Terrain, Helping Hand (to boost allies damage), Life Dew, Healing Pulse (to heal), and the aforementioned Clear Smog and Reflect.

If you really want to get into support, look at Pelipper, Drifblim, Hatterene, Dondozo, and Iron Moth along with the Intimidate users. Defense boosting Natures are king (reducing whatever offensive stat the Pokémon won’t use), and max out your EVs in HP and Defense.

Usually you’d want to use Light Clay or Terrain Extender to support the relevant moves, but Shell Bell or Leftovers are a good choice depending if you’re going to be dealing damage while supporting, or have a lot of bulk (high HP and Defense).

RELATED: How To Evolve Girafarig Into Farigiraf In ‘Pokémon Scarlet & Violet’

Of particular note is Slowking and Espathra. Slowking can carry either the Clay or Extender, along with both Reflect, Psychic Terran, and Slack Off. It can then attack with Chilling Water or Water Pulse (if you want to get confusion), or a little more oomph via Expanding Force.

Espathra can support with Feather Dance, Helping Hand, and Psychic Terrain are all viable depending what you allies have, just make sure you leave one slot for Roost to not die. While the Opportunist ability copies Cinderace’s Bulk Ups, you usually want to use Lumina Crash over Stored Power.

That being said, it can function as a discount Slowbro by spamming Feather Dance until Cinderace has minimized Attack, and then boosting up with Calm Mind before using Stored Power.

How To Use Cinderace

You can only catch one Cinderace via this event, but you can do the Raid over and over for loot. Your own Cinderace — along with having a Might Mark — will also have the ability Libero. Once per battle (reset when Cinderace switches out), Cinderace will change into the type of the move it’s about to use.

Unlike Terastallizing, Cinderace will not keep its Fire STAB no matter what, and Terastallizing will override Libero whether it activates or not. All that aside, Cinderace has adequate defenses but ultimately keeps its role of hitting hard and fast, although it is a bit of a glass cannon.

While perfectly usable, you may want to change a few things up to be optimal. Its best Nature is undoubtedly Jolly (making the most of that Speed stat), though Adamant can be argued. How you use Cinderace depends on how flexible you want it to be.

Its stats make it a prime candidate for Choice Band or Choice Scarf, giving a huge boost in Attack or Speed at the cost of being locked into a move until switching out. Use U-Turn if you don’t like what you see, or go to town with Pyroball, Sucker Punch, and whatever other high-damage physical attack moves you need.

Libero will change Cinderace’s Type to not only give it STAB, but may just trip up you foes as its weakness changes. Though this only gives a few extra turns of survival, this can seize the day.

One downside to this is, if you can’t switch Cinderace out, it’ll be locked into doing the same move over and over. If your opponent has a counter to whatever type Cinderace gets locked into, you may not be able to crack it even with the extra damage.

As such, another option is to use Heavy-Duty Boots. It prevents damage from entry hazards, and Stealth Rocks is particularly nasty as Cinderace is weak to it — losing 25% of its HP on switch in. As an aside, while Cinderace has Court Change (swapping all hazards, screens, tailwinds and other effects with the opponents’) Cinderace usually doesn’t have the time to support.

If you’re wearing Boots, carry on with the onslaught, and try to get in your opponents head. If they don’t know what type you’ll be next turn, Cinderace may survive long enough to pick the opposing team apart.

While there are better candidates to Terastallize (as mentioned with Libero), Cinderace could double down on Fire if its not going to be using any other move, or any other type that it is using.

NEXT: How To Evolve Gimmighoul Into Gholdengo In ‘Pokémon Scarlet & Violet,’ And Where To Find Gimmighoul Coins