'She-Hulk' star Jameela Jamil recently made a rough-but-seemingly-good-faith attempt to engage with the Disney Plus series' critics.

Credit where credit is due: despite the widespread panning of Marvel’s latest misstep, She-Hulk: Attorney at Law star Jameela Jamil is not burying her head in the sand, as the Titania actress recently made a rough-to-start effort to engage with and learn from even the most vehement of the Disney Plus series’ critics.

RELATED: ‘She-Hulk: Attorney at Law’ Episode 7 Review – Jennifer Gets Ghosted By A Manbaby, Goes To Therapy

Jamil’s latest foray into the world of She-Hulk criticism began on October 1st as a result of the actress sharing a playful video of herself eating McDonalds french fries in New York City’s Time Square alongside the caption, “WAITING FOR THE FINAL EPISODE OF SHE HULK LIKE…“ 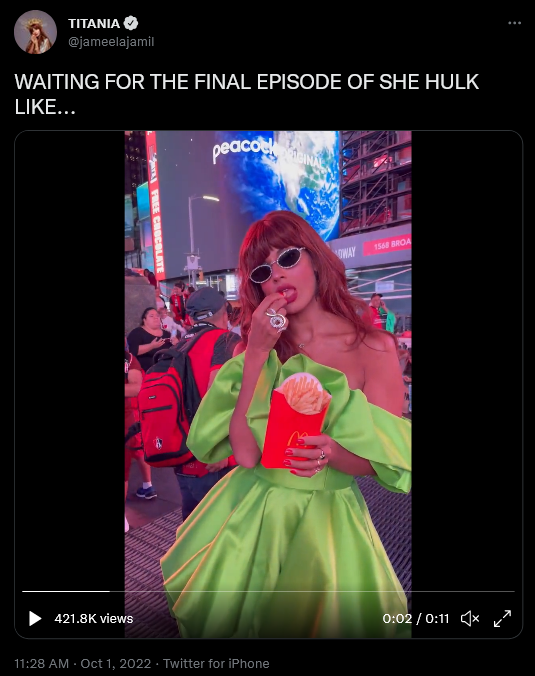 Inundated with the usual social media fare, with responses ranging from compliments on her dress to outright insulting of the series, one particular response from fellow Twitter user @alienboitv caught the actress’ attention.

“all that build up of 20 minute episodes for nothing to happen,” mocked the user. “you won’t be seeing a 2 seasoned fry”.

“Dude who cares?” fired back Jamil. “I got to live my dream and be in a Marvel project and go to events where I got to meet all my Favourite Marvel stars and talk to them about their movies, and I got PAID?! my cup is FULL.”

“But how is your life going?” she dismissively concluded her response.

Jamil’s snap finding its way across his desk, Geeks + Gamers founder Jeremy Griggs soon joined the conversation, observing “She-Hulk actress said she doesn’t care if the show is successful because she already got paid. Amazing.”

“The show IS successful,” the actress exclaimed in turn. “We were number 1 in America last week. If we don’t get a season 2 I am beyond happy with what we have. We made a lot of people happy and we were happy and loved it.”

It should be noted that though the show is being enjoyed by some – everything will have a fan, no matter how terrible – She-Hulk is not, by any measure, a success.

Not only does the Jade Giantess’ solo outing currently hold a lower rating among audiences on both Rotten Tomatoes and Metacritic than even the failed Inhumans pilot, but as per recent Nielsen ratings, She-Hulk is the first Marvel Studios show to not break into the data firm’s Top 10 Most Viewed Original streaming chart.

“If the show IS a success, as you say, there will be a S2 and none of these so-called haters will matter,” Griggs then asserted. “Which begs the question as to why you continue to focus on negativity when you claim there is so much positivity.”

“Because why only live in a bubble of congratulations,” posited Jamil. “I engage plenty with the people who love the show.”

To this, Griggs amicably admitted, “Fair enough. I can’t really argue with that. I don’t like the show at all but I’m fine with others enjoying it.”

Yet, Griggs was not the only critic with whom Jamil engaged, as the actress further responded to a number of other criticisms from the G+G head’s likeminded followers.

However, her subsequent interactions would not be as cordial as the one she shared with Griggs.

“Maybe next time you get a job you will study the source material?” asked @hawkeye_luap, to which Jamil explained, “I didn’t write the show.”

“I knew the source material backwards,” she clarified. “They changed my character and it was a fun cartoonish diversion. It’s a satire. Try not to get so upset and take everything so so seriously.”

Then met with an accusation of “I seriously doubt you know the character” by @SubparJenaTalia, Jamil simply wrote “Ok bro,” alongside an emoji representing the two-horned hand gesture for ‘rock on’.

“See that, she’s totes not mad the [emoji] even tells you,” said @SubparJenaTalia. “Sweetie, you’re little more than a meme of bad CGI and a busted a–hole.”

“No I just think it’s funny that you’re the exact stereotype of the guys we make fun of in the show,” quipped the actress. “Not all guys. Just guys like you. So no wonder you’re upset dude. It’s ok. Let it out, let it out babe.”

Puzzled by her seeming pride in the series mocking a particular ‘type of guy’, @TommyGunzLLMG politely asked, “But why make fun of anyone in the first place.”

To this, Jamil argued, “Have you seen… ANY stand up comedy.”

“It’s all ‘girls are like’ ‘women are like…’ this is comedy,” she reasoned. “My character pokes fun at misogynist women. It’s comedy. It’s light hearted.”

Making a separate criticism, @AlexsArrowCave opined to Jamil, “It’s the most boring garbage Marvel ever made. It makes Captain Marvel seem like a masterpiece. In no way is this show number 1. Can’t wait til it’s over so I can stop reviewing it.”

“Man this is a miserable and aggressive way to live and speak to strangers dude,” replied Jamil. “Did you… feel a bit called out about the way we discuss men talking to women online with SO much animosity?”

Eventually, following roughly two-days of interaction with She-Hulk‘s fans and critics, Jamil asserted on October 3rd, “TO BE CLEAR. It is absolutely FINE if you personally don’t like She Hulk. I know it doesn’t appeal to everyone. [But] Some people F–KING LOVE IT.”

“But can we all agree that you don’t need to be *so* hostile when you express your feelings *TO* me,” she then requested of those attempting to engage her in conversation. “We’re all fans, let’s talk nicely.”

Met with a recommendation from @nikoskarras1998 that she did not “have to answer all the trolls around the platform” and should instead “just have a connection with people who appreciate and admire your work on She-Hulk, Jamil declared, “ACTUALLY I really wanna hear and engage with critics so I can learn.”

“I value Marvel fans. But I can’t hear them when they’re screaming,” she said. “And when people are randomly rude and personal, it brings up my defense and nothing productive happens. If you want me to hear you, be humane.” 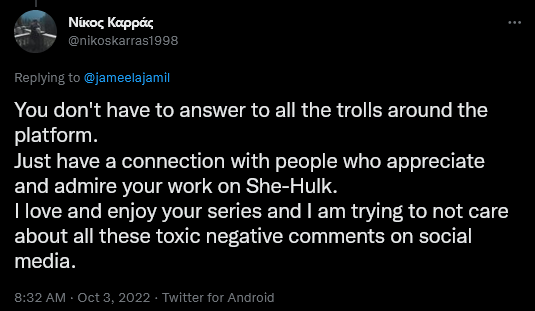 In an admittedly admirable display of her commitment to this humanity, Jamil reached out once again to the aforementioned @AlexsArrowCave, who had since responded to her question by detailing, “See people. This is the typical Hollywood Elite. They can’t handle criticism so they call it aggressive behavior. They’d rather resort to calling us names and trying to make us look like the bad guy instead of having a normal convo on why we don’t like the show.“

“Can we talk?” she continued. “I really don’t think us behaving like alley cats is productive. Do you think there is a better way to communicate your frustration, than to write to an actress saying her show is “garbage.” Surely you have more vocabulary to express constructive critique?”

“I wanna hear what you say, but I am human, if you speak to me in a rude way, for no reason, my defense comes up and I can’t hear you,” the actress wrote in a follow-up tweet. “I want to hear you. Can you talk to me like a person? It’s clear from my promo that I am so dedicated to this community, so why be offensive?

“Your character on the show I have no problem with. What I had a problem with was the way you made it seem like all you cared was getting paid,” he explained, going on to detail his specific criticisms with the series.

“No no, I was saying how lucky I was and how I had a blast and on top of that I got paid,” clarified Jamil. “To have such a blast. I would have paid to do this to be honest lol! It was my childhood dream. And I was sassy in response to a REALLY rude tweet that he quickly deleted.”

The last bit of her explanation appears to be a bit of a miscommunication, as of writing, none of the tweets Jamil engaged with appear to have been deleted.

She-Hulk: Attorney at Law is now streaming on Disney Plus.

NEXT: Marvel’s She-Hulk Star Jameela Jamil Responds To Criticism Of Her Live-Action Titania “I Accept Every Ounce Of Shade Here”