As Kenny Smith once said watching Vince Carter pull off his iconic under the leg “Dunk of Death [1]” during the 2000 NBA Slam Dunk Contest: “It’s over! It’s over ladies and gentlemen!”

That’s right, it’s time to pour “a little bit of the bubbly [3]” and celebrate the fact that She-Hulk: Attorney at Law – the biggest waste of time in television history – is finally at an end.

And after putting myself through the suffering of watching all nine of its episodes, I can confidently say that She-Hulk: Attorney at Law was a show about nothing – and not in the Seinfeld way.

Billed as a superhero show, its eponymous Jade Giantess took every opportunity it could and to reject the very idea of being a hero did everything in her power to avoid doing anything that could even be confused as heroic.

Meanwhile, her alter-ego, Jennifer Walters, did nothing more than spend a full season bitching about her bad dates.

RELATED: ‘She-Hulk: Attorney at Law’ Episode 8 Review – Did You Ever Hook Up With The Daredevil In The Drunken Moonlight? [4]

Now, here we are at the end, and She-Hulk has wrapped its pointless existence with a childish, man-hating temper tantrum of a finale.

Let’s just dive into this so we can finally move on our with our lives.

Last week, despite having lectured both us and her cousin about how she was just so good at keeping it in check, Jen lost control of her anger after one of her drunken hook-ups was broadcast to the attendees of a phony-ass award ceremony – the kind you’d see demanded by women who think the act of using a tampon is something they should be celebrated for.

In the wake of this meltdown, Jen begins this episode waking up in the superhuman equivalent of Twitter jail. Don’t worry though, as just like a violent criminal in New York City, Jen is out on the streets just a few hours later.

RELATED: ‘She-Hulk’ Star Jameela Jamil Says She Wants To “Engage With Critics So I Can Learn” Following Twitter Spats Over Series’ Quality [5]

Released under the condition that she never again ‘Hulks out’, Jen decides to ride out the heat from her outburst at The Abomination’s self-help retreat.

Upon her arrival, she is greeted by Wrecker – and given the fact that he’s one of the only two men in this show who has expressed any interest in wanting to be in the same room as her, I’m honestly surprised she didn’t just immediately try to take him to bed.

But none of that matters because the main focus of this episode is series’ ‘big bad’ the Intelligencia – otherwise known as the writers’ strawman placeholder for any man who doesn’t like this garbage show.

If this episode proves anything, it’s that Jessica Gao and the rest of the funky bunch behind this series are nothing more than insecure children, as even after being handed nine episodes to do whatever they wanted with a beloved Marvel character across, they chose to waste everyone’s time by dedicating their show to “the haters”.

That’s right – Gao knew that her show was going to be so poorly received by fans that even before it released, she chose to spend roughly 1/3 of the series time bashing its then-hypothetically dissastisfied viewers.

Twitter lives so absolutely rent-free in her mind that it’s really no surprise that She-Hulk was filled with such rampant man-bashing.

RELATED: ‘She-Hulk’ Cast And Crew Ecstatic Over Twerking Cameo From Megan Thee Stallion: “She Really Fit Into The Whole Ethos Of What We’re Doing With The Show” [7]

Getting back to the Intelligencia, it’s soon revealed that Todd, the goofy cornball who has been trying to hit on She-Hulk since the series’ second episode, is the man behind the group of online trolls.

His reason? He doesn’t believe that Jen “earned” the right to wield her super powers.

Let’s see if I have this straight.

The show that outright rejected the idea of being a hero in any capacity ends its run by complaining against a strawman interpretation of fans who don’t think She-Hulk deserves to be one.

The same fans who know that Jen was always ‘given’ her powers by accident, and were in reality criticizng the character’s non-heroic actions as presented to them by the writers.

But don’t worry folks, the plot of this show doesn’t matter – literally!

Eventually faced with a random mash-up of characters and plotlines, Jen decides mid-set piece that she doesn’t like the way her finale was going, and so breaks the 4th wall to have words with her writers.

Surprise, folks! The chucklef–ks who wrote this garbage all get a cameo in its finale.

Making her way to the She-Hulk writer’s room, Jen argues that the show shouldn’t follow the same superhero tropes as the shows and movies before it, only to be met with the admission that they couldn’t do anything without Kevin Feige’s permission.

(At least this moment presents the funniest joke on the entire show, wherein the writers portray themselves as having been earnestly developing a genuine superhero show.) 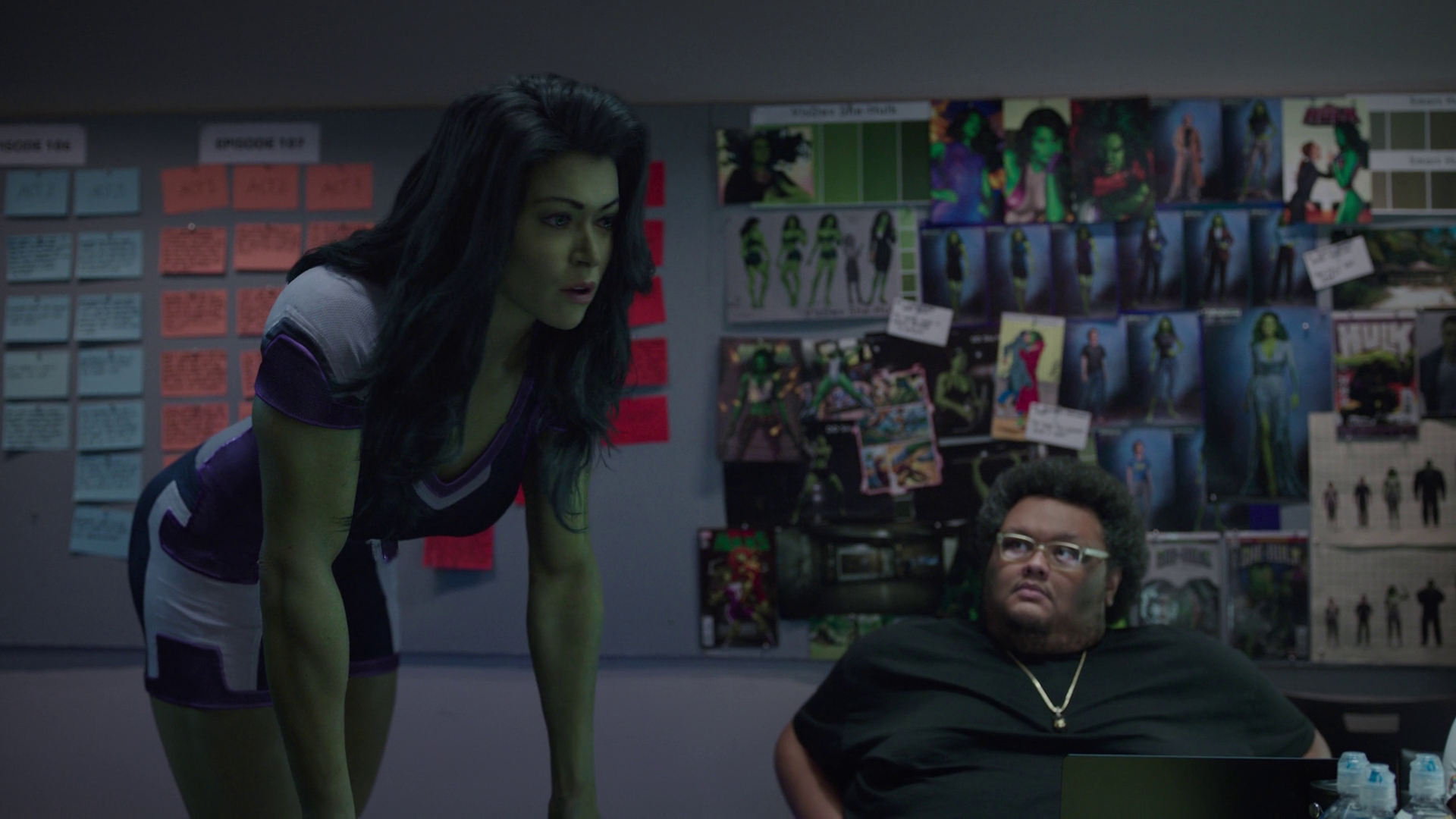 Proceeding to take her complaints directly to the Marvel Studios head himself, Jen then discovers that the man is actually a robot named K.E.V.I.N. – a.k.a. the Knowledge Enhanced Visual Interconnectivity Nexus.

Taking a seat in the machine’s control room, the insufferable middle-aged slag begins to have a completely on-brand, narcisssitic tirade, expressing  frustration to K.E.V.I.N. about how she believed the show’s side-characters were outshining her own story.

Giving consideration to some of Jen’s complaints about the finale, K.E.V.I.N. decides to make a number of accomodating changes to the episode’s original direction before throwing his unwelcome guest back into the show.

In doing so, K.E.V.I.N. fast-forwards time, with Jen reappearing to find Todd and the Intelligencia being arrested for…stealing her blood? Her data? Showing her nonconsenual sex tape to a room full of strangers?

They never say. Like I said, nothing matters on this show.

RELATED: ‘She-Hulk’ Head Writer Admits Disney Plus Series Originally Developed As Legal Procedural Until Writer’s Room “Realized None Of Us Are That Adept At Writing Rousing Trial Scenes” [11]

Oh, but surprise, Marvel Comics fans! As She-Hulk concludes with a scene of Matt Murdock making a stop over in Los Angeles and meeting Jen’s family – another K.E.V.I.N. fulfilled request – the show introduces Hulk’s son, Skaar.

Honestly, who cares at this point? After having sat through nine weeks of non-entertainment, all I can say is that I’m thankful that this painfully boring ride is over.

She-Hulk was not a show made for comic book fans or even MCU fans. Instead, it’s an eight-figure coping mechanism meant to validate the sad lives of the middle-aged dog moms and wine aunts that made up its writer’s room.

I’m willing to bet money that She-Hulk only exists as a consolation prize for its hack fraud head writer because Kevin Feige was afraid that she’d end herself after he rejected her terrible pitch for a Black Widow movie.

Dustin Poirier once told Colby Covington that the next time he sees him, “it’s on sight [12]“.

In this same vein, I believe the writers of this show deserve a Stone Cold Stunner the next time anyone sees them in public.

[Editor’s Note: We at Bounding Into Comics DO NOT endorse anyone doing this – Spencer]

A pointless television show about a poorly written character created by people who certainly sniff puddles and lick windows – She-Hulk: Attorney At Law may be the worst television show…ever!

If anyone else can think of a worse show, by all means feel free to let me know in the comments, because as it stands, I can’t think of a bigger waste of time, life, or money than this Disney-backed production.

If this show gets a second season, best believe it will be purely out of spite and nothing else.