'Guilty Gear' creator Daisuke Ishiwatari has officially confirmed that Bridget is transgender and now identifies as a woman.

Following a long month of confusion and debate sparked by one of the iconic fighter’s Guilty Gear Strive arcade endings, series creator Daisuke Ishiwatari has officially confirmed that the nun-disguised bounty hunter Bridget has discarded their male origins and now fully identifies as a woman.

Though the young fighter has been portrayed as a boy ever since their first appearance in 2002’s Guilty Gear XX, with their cross-dressing being more of a means of survival from their village’s belief that the birth of male twins is a bad omen and that the younger of any pair must be killed in order to stave off misfortune than any sort of indication regarding gender identity or sexuality, Bridget’s identity became the subject of widespread debate upon the release of Strive.

Therein, Bridget’s ‘hard mode’ arcade storyline centers on her identity, beginning with her opening fight against US Secretary of Defense Goldlewis Dickinson.

After being defeated by the yo-yo wielding youth, Dickinson composes himself and admits, “No wonder you’re so famous. Looks are deceivin’,” before promising, “I’ll be back for more, li’l lady.”

“I’m…I’m a boy,” Bridget fires back. “These girl-clothes are…it’s a long story.”

Though the subject is put to the side as Bridget continues to advance through their opponents, it is brought up once again upon completion of her final arcade mode bout against series protagonist Ky Kisuke.

Upon the player reducing his health bar to zero, Ky calls the fight, finding himself impressed with Bridget’s growth as a fighter.

However, Bridget believes her inability to bring down Ky is proof that she is not strong enough to continue on her path as a bounty hunter.

“I’m not strong like you, Mr. Ky,” laments Bridget. “I’m too scared of losing what I have.”

“Runnin’ away, huh?,” then asks Dickinson, who is present at the fight after teaming up with Bridget beforehand. “Ain’t you a little young for a midlife crisis?”

Bridget next stutters, “O-of course I’m running,” before sheepishly declaring, “I’m happy the way I am…”

“Discretion can be the better part of valor,” Ky interjects. “But think about it. For the sake of your future self.”

Proceeding to rock back and forth in a kneeling fetal position, Bridget ponders, “For my…future self…”

“But what if I make the wrong decision?,” the scared fighter asks her companions.

“You got your whole life ahead of you, kid,” assures Dickinson. “Gotta learn to take a hit sometime.”

“And there are helping hands right in front of you,” adds Ky.

Presented with this support and encouragement, Bridget soon pops back to her feet and adamantly affirms, “I…I don’t want to run scared anymore.”

“If I keep on faking it like this, I know I’ll regret it,” she continues. “So from now on, no matter what…no more lying to myself,” exclaiming “Thank you! Both of you!” to Dickinson and Ky.

“Cowgirl is fine!” Bridget fires back. “Because…I’m a girl!”

While many players found this moment, which is presented as transcribed in both the Japanese and English releases of the game, to be a surefire confirmation of Bridget’s transgender identity, others questioned whether this change was intended by ArcSys or the result of a Western localizer gone rogue.

Matters were only compounded and confusion was only spurred further by both ArcSys’ continued silence on the matter and their odd decision to avoid using specifically gendered language in Bridget’s profile entries on the Guilty Gear Strive official website, in doing so side-stepping the question all together.

That was until September 14th, whereupon Ishiwatari made a special guest appearance in the latest entry of ArcSys’ Guilty Gear Strive dev diary, Developer’s Backyard, centered on discussing the recently-released DLC fighter.

Beginning with a quick rundown of Bridget’s history and a brief note by game director Akkira Katano’s on her new mechanics – all of which referred to her with female pronouns – the diary soon turns to Ishiwatari himself, who proceeded to finally offer an official word on the fighter’s gender. 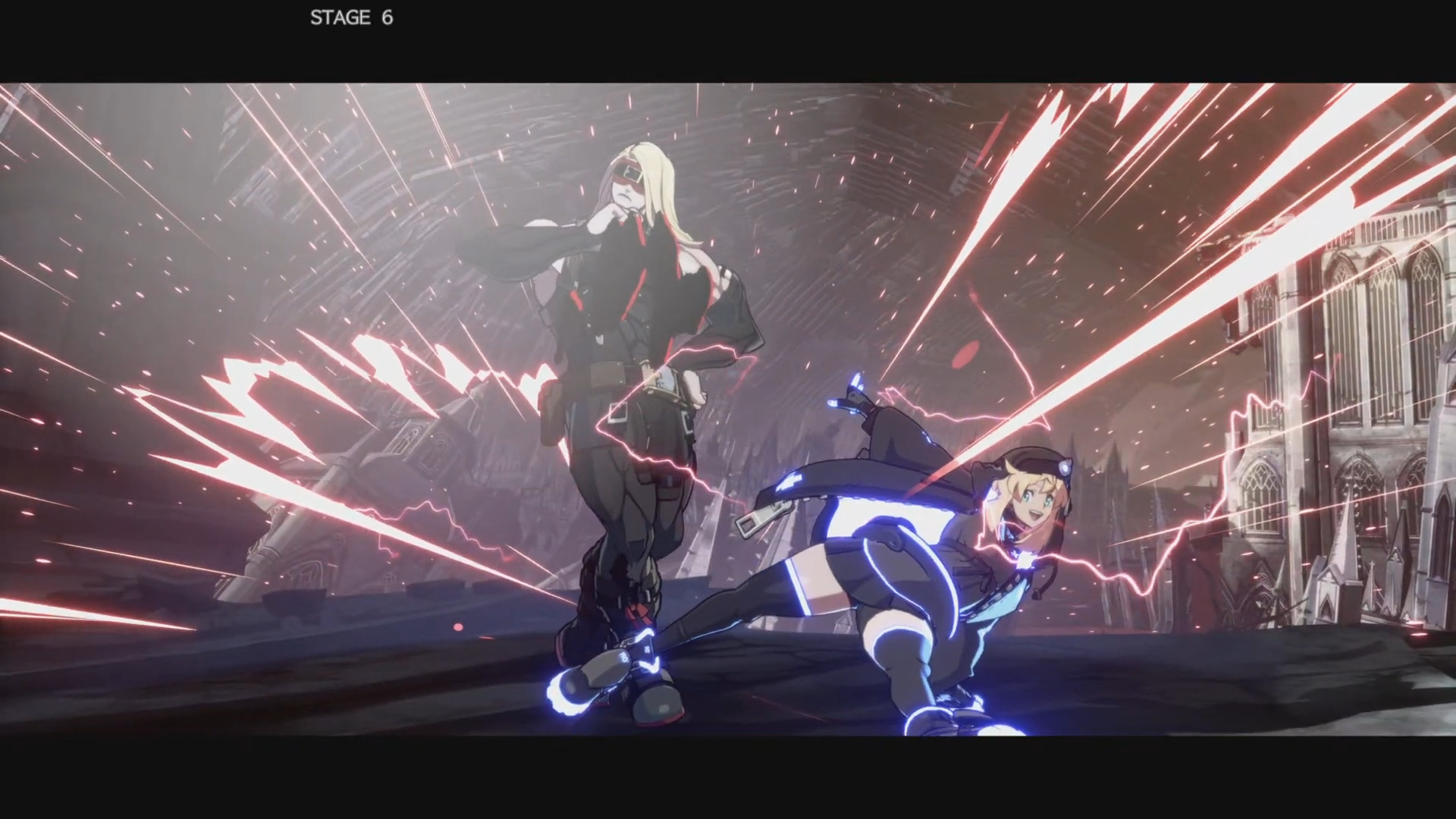 “We’ve received many inquiries about Bridget’s gender,” said the creator, before confirming. “After the events of Bridget’s story in Arcade Mode, she self-identifies as a woman.”

“So, as to whether ‘he’ or ‘she’ would be the correct pronoun for Bridget, the answer would be ‘she,’” he added.

Offering a short recap of Bridget’s “kill the younger twin” backstory, Ishiwatari explained that after the bounty hunter eventually dissuaded her village of their superstition (a bit of lore added to her character with -Strive-), “nothing remained to restrict how both Bridget and her parents lived, [and thus] after this, Bridget tries living as a man, but it doesn’t feel right.”

“This is where the Arcade Mode story begins,” he asserted. “After her exchanges with Goldlewis and Ky, Bridget faces parts of herself she has tried to ignore, and makes a big decision for herself.” 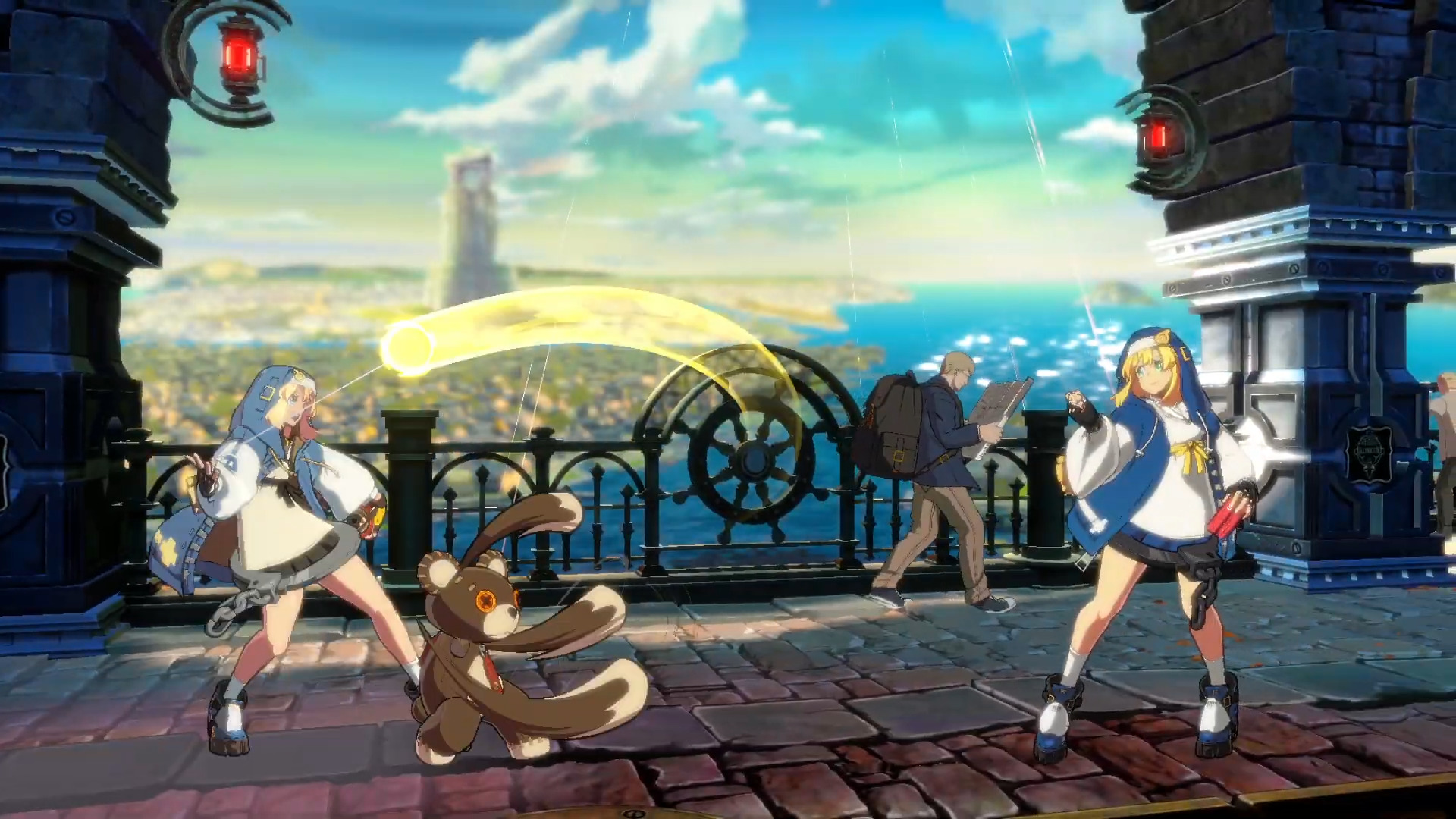 “I hope that all of you will watch over her path after her courageous choice to stay true to her own feelings,” Ishiwatari signed off.

In conclusion to their discussion of Bridget, Katano took a moment to address the questions around the canon status of the game’s various and difficulty-dependent endings.

“By the way,” he informed players, “although the difficulty and story dialogue of Arcade Mode change depending on your match results, this doesn’t change the main plot, nor are there alternate endings such as ‘good’ or ‘bad’ endings.”

“The same for other characters’ Arcade stories as well,” he clarified. “In general, these variations show other aspects of the characters.”

Notably, Bridget’s new identity marks a stark turning point in their history, as up until this moment the fighter has always been considered to be a boy, both in-game and by Ishiwatari himself.

During an appearance at Anime Expo 2009, Ishiwatari was asked by a fan for insight into his design process for Bridget, to which the creator explained that “a lot of fighting games already had a cute character, so we wanted to do something unconventional. That’s why we have a cute character that’s a guy.”

Daisuke Ishiwatari confirmed that Bridget is male, because they wanted to do something different than other fighting games. pic.twitter.com/lupymkXcpC

Guilty Gear -Strive- is now available for the PlayStation 4, PlayStation 5, and PC platforms.

NEXT: Erin Fitzgerald Reveals She Stepped Away From Role of Ramlethal So Guilty Gear -Strive- “Could Cast More Appropriately” Based On Skin Color; Laura Stahl Announced As Replacement

Chuck Dixon: All Of The Classic Superheroes Like Superman And Captain America Grew “Out Of The Sense Of Populism” Of The Great Depression Era