Bounding Into Sports
/
by Danilo Collins

Following the chaos that led to three matchup changes on the card, a number of fans and commentators speculated that the promotion was in on the shake-up. Stand-up comedian and former UFC fighter Brendan Schaub claimed that the UFC organized the debacle to boost pay-per-view sales.

He stated, “Listen, I’m not a conspiracy guy. I’m not jumping on this freaking mic in Thicc Boy Studios to tell you that the UFC was in on this and it was this whole weird conspiracy and all this stuff was going on and they’ve always planned to do this. I don’t believe in any of that.”

He went on to question the Rodriguez and Holland originally scheduled for a catchweight fight at 180 lbs. when the UFC had previously made fighters cut weight on a much shorter notice. He then addressed Khamzat Chimaev completely missing weight.

After noting Khamzat comes from a very professional camp, he asserts, “When it comes to weight cutting there’s no way that guy was just not doing what he had to get done to make the weight. And he’s made the weight before, right? So we know he can do it. The way he missed weight, to me, there’s no way Khamzat who’s fighting Nate Diaz, which is the biggest fight of his career, hands down, main event on a pay-per-view, is going to come in 10 lbs. overweight. At his level? With the camp he comes from?”

Schaub went on to question the UFC’s explanation that a doctor instructed Chimaev to stop cutting weight, citing Neil Magny informing him that he’d never received a visit from a doctor. He also pointed to Chimaev’s reaction when he missed weight, noting he wasn’t surprised but instead played it off.

He went on to proclaim, “The one thing [the UFC does] not compromise on is when a fighter misses weight. It’s the one thing, man. It’s the one thing the UFC has zero tolerance for. If you’re Khamzat, you know, dude, that’s a big f***ing deal. You didn’t miss it by half a pound, you missed it by a significant amount of weight. And he had no f***s given.”

He then asserted, “That’s the only time where I have skeptical hippo eyes. Something’s going on there it was agreed to way before that he was going to come in at 180 lbs., I think. Now, I don’t think this is a conspiracy and the UFC was like all right let’s do this to Nate and Khamzat and Kevin Holland and Daniel Rodriguez and Li Jingliang. I don’t think it’s like that.”

“I do think they were kind of trying to figure things out, but there’s something to be said where the UFC and Dana said this — I’m not pulling this out of my a**— but the UFC knows how a pay-per-view is gonna do. They know how it’s gonna sell even before the fights go live. … [They] can see how it’s trending, how it’s tracking through all their promotions, can usually tell. ” Schaub said.

“What I think happened, again this is just my opinion I have no way to back this up, no evidence, they’re not going to give me any of that data to back this up, which sucks, but whatever. I think fans were turned off by the UFC and especially Dana White in particular his treatment of Nate Diaz and the way that Nate Diaz has always been kind of F the man and done it his way and then he wants out and people don’t like the way he’s being treated. And he keeps asking for fights and they won’t give him fights,” he posited.

“And then they just don’t give him a fight, they give him the worst matchup possible. … If you’re a Nate Diaz fan, the way you show the UFC that this isn’t right and we don’t agree with this … the only way to fight back against this is don’t buy the pay-per-view. Don’t subscribe to it. Say we don’t like this,” he speculated.

RELATED: Leon Edwards’ Coach Responds To Jorge Masvidal’s Claim He Will Be Champion: “You Little Rat Judas, Your Time Will Come”

Schaub then reiterated how much the UFC knows about whether or not a Pay-Per-View event will do well before asserting, “I think if people can assume the outcome of a fight, they went, ‘I’m not interested in seeing Dana White, once again, f*** over a fighter who’s put over his livelihood on the line for him and so it wasn’t trending very well. It wasn’t trending very well at all because you kind of knew the outcome. The UFC f***ed up. They overplayed their hand. They thought the audience was dumb. And we’re not dumb. The general fan is not dumb.”

He later asserts, “And it just so happened that Kevin Holland and Daniel Rodriguez were at this weird catchweight at 180 lbs. Khamzat [Chimaev] weighs in at 180. So not only was it a complete shuffle, but it was a perfect shuffle, not of one match-up, but three on the pay-per-view. To UFC’s credit when they did shuffle it up it’s a better fight card, a way better fight card.

“I just think it wasn’t trending well,” he reiterated again. “They had this kind of as a plan B and it was a great plan B and they were able to pull it off if the audience weren’t buying into it, which to their surprise we didn’t buy into it because we don’t want to see anybody treated like Nate Diaz was being treated.”

White completely shot down Schaub. However, former UFC fighter Pat Miletich was caught in the crossfire, as White thought the comments came from him.

“I heard this thing today, and I don’t know how true it is — Pat Miletich was saying we told Khamzat [Chimaev] not to make weight because we weren’t selling tickets,” White exclaimed to the media on Tuesday. “The f****** show was sold out going into that day of the weigh-ins.”

“I don’t know if Pat really said that, but if he did, he has to be the dumbest motherf***** on the planet,” White continued. “I mean, you know how f****** stupid you have to be to even think something like that, let alone say it publicly and act like you’re f****** serious. We’re regulated by the athletic commission, and if you think that we told Khamzat Chimaev to not make weight, then Khamzat shows up and the fans are all pissed off at him and stuff, and he’s going to just…”

White concluded, “If you know anything about the sport — this is a guy that was actually in the sport, training and fighting and everything else. If Pat really said that — holy s***, we might have to send him out to the f****** clinic here, the brain clinic to get him f****** checked out.”

A reporter later told the UFC boss that the comments came from Schaub. “I apologize to Pat Miletich, then. That makes sense,” White responded.

Schaub didn’t wait long to fire back via Instagram. He called White a “bully,” “dork,” and “low budget Vince McMahon.” He also blasted the UFC’s lack of transparency and fighter pay.

He wrote, “Oh god… here we go again. I’ve been nothing but cool and thought you’d learn from the last time you mentioned my name and got destroyed. Unfortunately, not surprised you’re a bully. Always have been. “

Schaub continued, “You put on a pair of designer jeans and some ‘hip sneakers’ and think you’re cool. You’re still a dork with a frat bro vocabulary. Calling me and numerous people ‘dummy’ ‘dumbass’ ‘f***ing idiot’ cause we have questions about ‘the chaos’ at UFC279?” 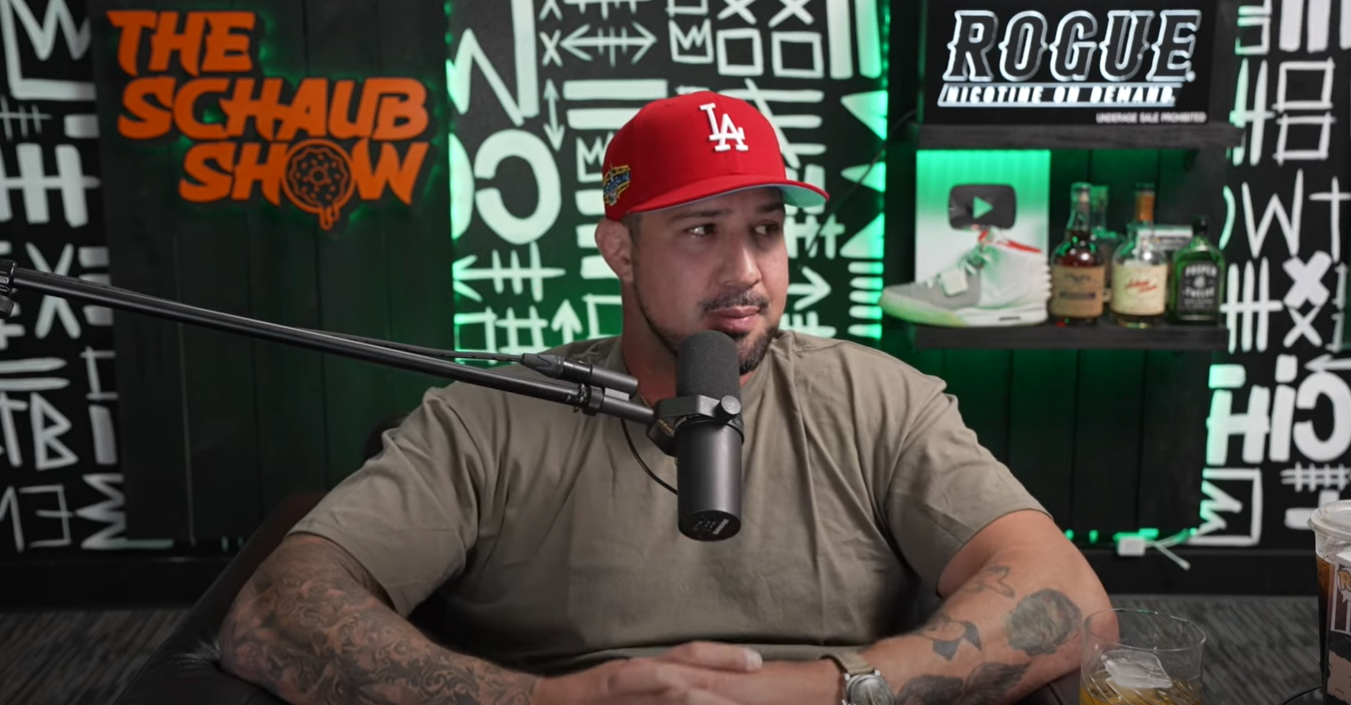 He then rebuked White’s assertion about the event being sold out making it clear he was referring to Pay-Per-View sales, “Also, no one is talking about *gate tickets,* I was referring to *pay per view buys* and how UFC 279 was *trending*… which you don’t release to the public, but will say ‘it went F***in great bros!’ Sorry, we just don’t buy what you’re telling us after lying numerous times but the sheep media you pick to attend events don’t have the balls to call you out.”

Schaub then railed at White comparing him to Vince McMahon, “Just in the recent press conference you were caught lying about extra compensation to the fighters. You need a reality check. You’re surrounded by ‘Yes men.’ You’re not special, you’re not original. You’re a low budget Vince McMahon. Every move you make is a copy cat of that dude. Only thing you have in common is you’re both on steroids and dress like a**holes.”

Schaub continued, “Need I remind you, your origin story is a failed cardio kick boxing instructor who had two rich friends in high school to fund this business. Now go make a ‘cool’ video with the Nelk boys to stay relevant or have your PR team come up with a good press story to distract the fans away from fighter pay and how they have to wear those awful under armor Rock shoes and won’t see a dime. ‘Dummy.'”

He concluded by accusing White of stealing his shows, “PS. Quit stealing my shows on thicccboy network and recreating it on Fight pass, k? Also… leave Pat Miletich alone.”

What do you think of White and Schaub’s beef?

NEXT: Dana White Reacts To Khamzat Chimaev And Paulo Cost Dust-Up: “We’re In The Fight Business. This Stuff Happens”

Luke Rockhold Already Has Condition He Would Return For