WATCH: Bodycam Footage Shows Police Dragging Marshawn Lynch From His Vehicle As He Appears To Nod In And Out Of Consciousness

Bodycam footage of Marshawn Lynch's arrest was fully released to the public and shows the former NFL star running back of the Seattle Seahawks being forcibly removed from a Ford Mustang on suspicion of driving under the influence (DUI).

Bodycam footage of Marshawn Lynch’s arrest was fully released to the public and shows the former NFL star running back of the Seattle Seahawks being forcibly removed from a Ford Mustang on suspicion of driving under the influence (DUI).

The video begins with a female police officer radioing to dispatch describing Lynch’s vehicle, “From the indents in the concrete it looks like he drove quite some ways on the rim.”

As the officer gets closer, it’s clear that Lynch’s left rear tire is flat and that his left front tire appears to have been completely shredded as it’s nowhere to be seen. Lynch is also seen in the car reclined in his seat with the door open and appears to be completely oblivious to the officer.

The officer also observes that at least one of the Mustang’s right side tires is also flat. She also says that the Mustang’s engine was dragged on the road too.

After observing the flat tires on the passenger side of the vehicle, the officer then returns to monitor Lynch, who appears unconscious in the driver seat. At one point, Lynch does appear to wake up and adjust his position in the seat before losing consciousness again. He doesn’t appear to notice the officer’s presence.

The officer was clearly waiting for backup to confront Lynch and when they do arrive she details, “I’ve never seen somebody drive a car to the point where the rim is totally gone.” Another officer then asks, “Is he still sleeping?” The female officer responds, “Yeah, he was spitting while he was sleeping.”

Not only is Lynch still sleeping, but he’s in a deep sleep as he does not notice the officer’s open the passenger side door and poke their heads into the vehicle.

He even shakes his head ‘no’ when asked if he knows who he is. Lynch does go on to claim that he stole the car although he laughs and smiles afterwards indicating he’s telling a joke.

The former Seahawks running back then reiterates he stole the vehicle when a male officer asks him if the Mustang is his. It does appear that he eventually admits the vehicle belongs to him. One of the female officers says, “It belongs to you?” Lynch’s reply is muffled so it’s hard to tell what he says, and we don’t get a good look at his face either.

After trying to determine what exactly happened to the Mustang that the tires were torn up and flattened and the engine was drug along the road, two other officers show up and are informed by the female officer that Lynch informed her that he doesn’t drink alcohol and do drugs.

One of the female officers then asks Lynch if he is going to exit the car or if the officers are going to have to help him exit. 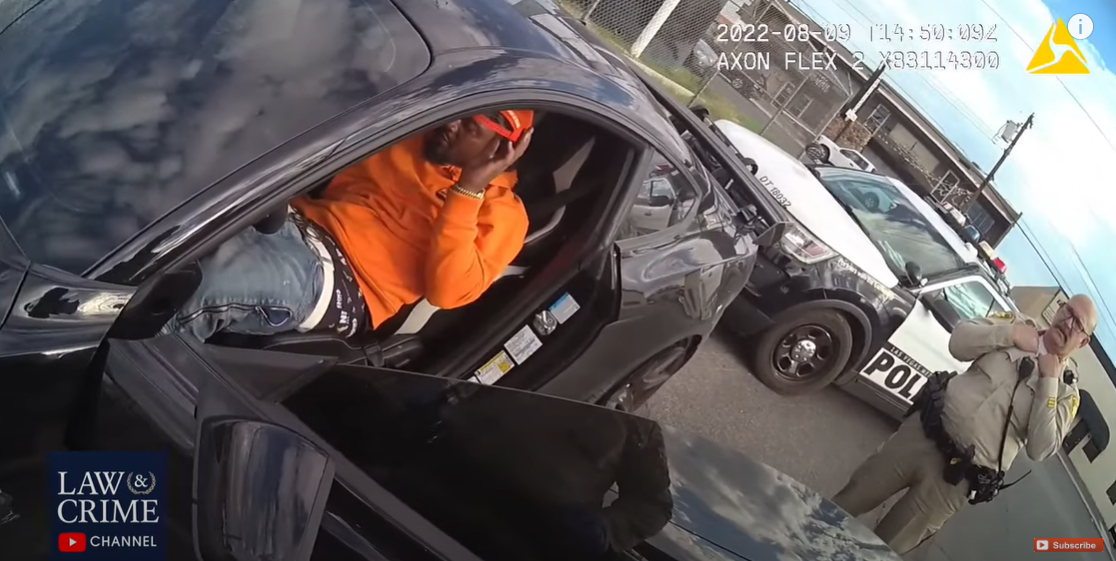 Lynch replies to the request seemingly perplexed that the Mustang has been totaled. You can hear him ask the officers, “I’m not driving. The car’s not on. What is the problem? I’m just asking what’s the problem.”

The officer responds, “There’s not different kinds. There’s only one kind.”

Lynch then says, “Explain it to me.” The officer rebuts, “Because I’ve already explained it. Failure to obey a command by an officer, a lawful order, is obstructing. So, this is your last chance. Step out of the vehicle for us.”

“Everything is understandable,” Lynch replies. “All I’m asking is why will I not be pulled out.” At that point one of the officers grabs Lynch by the arm and the back of his hoodie and drags him out of the vehicle.

He’s then rolled onto his stomach and his hands placed behind his back and handcuffed.

After Lynch is dragged from the vehicle one of the officers says, “He does smell like alcohol.” The officer then informs Lynch, “Right now, you are being arrested for the suspicion of DUI.”

Police then begin inspecting the Mustang while Lynch is loaded into of the cruisers.

TMZ Sports reports that after Lynch was transported to the police he was uncooperative and “had to use a restraint chair” in order to draw blood from him. The outlet also noted that Lynch was driving into curbs before police eventually confronted him albeit the bodycam footage seems to indicate the officer found Lynch’s car parked and him asleep in it.

It’s possible video camera footage shows him wrecking the vehicle before he eventually came to a stop and fell asleep. Lynch was booked for a DUI among other charges.

Lynch’s lawyers believe he will be exonerated issuing a statement, “Marshawn was not pulled over for a DUI. Rather the vehicle was safely parked and not in operation. We are confident that when all evidence is presented, this will not be a DUI under Nevada law. Marshawn appreciates and is thankful for everyone’s concern and support.

He is due in court in December.

What do you make of this bodycam footage of Marshawn Lynch’s arrest?

Arizona Cardinals Defensive End J.J. Watt Reveals He Had Heart Shocked Back Into Rhythm After He Went Into A-Fib