Marvel Comics has managed to unite readers across every possible spectrum with their latest issue of What If…?, as near absolutely everyone found themselves either baffled or offended over the publisher’s take on an Asgardian version of Miles Morales.

Written by self-professd Mexican-Jewish author Yehudi Mercado as part of the current volume’s overarching answer to the question, as put forth by the publisher, “What if Miles Morales was based on a different Marvel hero other than Spider-Man? [2]”, the latest issue of What If…? sees Miles take up the role of the mighty Thor.

Though Marvel undoubtedly expected to receive a wave of praise for their latest attempt to milk their half-black, half-Latino replacement for Spider-Man – originally conceived as part of the Ultimate universe before being eventually transported over to the 616 as part of the publisher’s Marvel Now initiative to ‘diversity’ their line’ – they were instead met with a wave of criticisms over Mercado’s writing.

Drawn by Luigi Zagaria, this iteration of Miles is a caricature of African-American stereotypes, with the black Asgardian wearing sneakers that look like Air Jordans, having his version of the hammer Mjolnir covered in graffiti, and talking in ebonics – to the point where most of his dialogue is either poorly written original raps or references to popular rap songs.

The page which drew the brunt of fans’ ire was one wherein Miles, walking through the graffiti-tagged Brooklyn otherwise known as this universe’s Asgard, takes in the sights of his neighborhood whilst expositionally rapping to himself.”Of all the five realms, Asgard is his hood,” reads Mercado’s dialogue. “For miles you can see he’s just that good.””The rainbow bridge takes him on his quest, the Bifrost Line goes north, south, east n’ west,” it continues. “From Jormungandr to the Wrecking Crew, he stuck Gullinbursti in the Asgard zoo.”Mercados’ Miles further asserts, “But he is low key when he wants to be, name on marquees, like his Uncle Loki.””Odinson, he’s the son of gods and kings, got so many wins, check out all those rings,” the young hero concludes. “He’s formally known as a prince for sure, his subjects and friends, they just call him Thor.”

RELATED: YouTuber Comics By Perch Says Low X-Men Sales Reveal “Definite Problems” At Marvel: “These Numbers Are Bad. This Is Not Healthy At All.” [3]

Another page (as seen in this article’s featured image) shows Morales summoning his hammer with the command, “Hammer Time!”, an obvious reference to the M.C. Hammer rap song from the early 1990s, “U Can’t Touch This”.

At one point during the story, Miles travels with his Uncle Loki to Jotunheim – in this universe an ice-covered version of Flushing Meadows – wherein he confronts the realm’s dreadlock-and-chains-wearing Frost Giants.

Not only that, but during the fight, Miles’ battle cries are all embarrassing ‘references’ to hip-hop lingo, with the young hero crying, “Time to spin these hits,” “Now that was a banger!” and “Right up to your face and diss you!”

Later, while in the court of his Timberlands-wearing father, Miles interjects with yet another dated hip-hop reference, this time namedropping 2Pac’s famous album and shouting “All eyes on me!” as he jumps to present Odin with a birthday present

Miles’ hip-hop battle cries return when he rescues the court from a Frost Giant attack, bashing Laufey into submission whilst declaring, “Ain’t no party! Like an Asgard party! Because an Asgard party don’t quit!”

Not only were fans taken aback by the issue, but a number of comic professionals also found themselves similarly stunned by Mercado’s work.

Actor and comic writer Kevin Grevioux (New Warriors, Underword: Rise of the Lycans), , took exception to the portrayal of Morales, stating on his Facebook page, “STRAIGHT OUTTA AZGARD!!: “THOMEBOY”?? REALLY?? Beta Ray Bill, an ALIEN, got a better hook-up than brother Miles! And a new hammer to boot!!”

“Blonde flattop fade, graffiti on the hammer, speaking Asgardian ebonics?” he asked. “Wearing Air-Valhalla Nikes while he BOPS down the Bifrost? Is this how they see us? I’m surprised he’s not palming a BASKETBALL with his other hand and going for that 360 from the top of the key ‘thunder-dunk’.”

Grevioux continued, “Now, I’m not one that believes that all Black characters should be written by Black creators. After all, very FEW of the Black characters that we know and love like Black Panther, Blade, Black Lightning, Cyborg, Falcon, Luke Cage, Storm, Mr. Teriffic, John Stewart, etc., were created by Black creators. Because, if so, then we would have to logically concede that we shouldn’t be the regular writers on the MAIN Iron Man, Wonder Woman, Flash, Batman, Thor, JSA, JLA, Spider-Man, Avengers, Fantastic Four, Daredevil, and Superman books, etc. (and we haven’t in 80 years of comics).”

“But is this what happens when we’re not in the room and part of the decision-making process when it comes to creating our own images?” he then questioned “Are we that unwanted? And when we do create our own images, do they try to keep us away from them after conception so they can insert their own views about who they want us to be? And how they want us to be perceived? Does this topic really have to be that difficult? I think they sincerely want diversity. They just don’t want diversity from US.”

Image Comics founder Erik Larsen, stated, “Wow. I get trying to contrast why Miles would be any different from standard-issue Thor–but that is ill-advised.”

“Kills me every time I see what my skin color are suppose to want from representation in comics,” said Tan. “Asian food, Asian takeout, and eating around the table that has nothing to do with the story except one or all of those around, are Asians… Sorry you experiencing this, man…”

RELATED: Taika Waititi Claims That Thor: Love And Thunder Is Not A Passing Of The Torch Between Natalie Portman’s Jane Foster And Chris Hemsworth’s Thor [7]

However, perhaps the most scathing sentiment towards not just the What If…? issue but also the concept of forced diversity in comics came from veteran industry artist Howard Chaykin, who affirmed to Greivoux, “You can’t be surprised.”

“Two dimensional, one note cliché based stereotypes are what mainstream comic books have trucked in in lieu of actual characterization since its birth, and it’s only become more ridiculous with the desperate need to be appear inclusive and diverse,” he recalled. “We can trace this back to those insipid Green Lantern/Green Arrow presentations of relevance. It’s not who’s doing what–it’s the banality, underpinned by cultural amnesia and willful ignorance of the real world, via actual experience, as opposed to learned data from misbegotten sources, that makes this s–t so insultingly lame.”

“And don’t get me started when I see Jews presented just as shallowly as this,” concluded Chaykin, who is himself Jewish.

Notably, when confronted with these criticisms on Twitter, Mercado responded like many of his peer tend to do by proceeding to insult any and all who dared shower his issue with anything but praise.

One particular tweet saw the writer default to the age old tactic of accusing his critics of being nothing more than perverts.

Responding to a tweet from @soloman_bt which observed, “The dude who wrote the Thor miles comic is white and he put Asgard in the ghettos“, Mercado cried in a now-deleted-tweet, “I should have added more upskirt shots and then you would have loved it!” 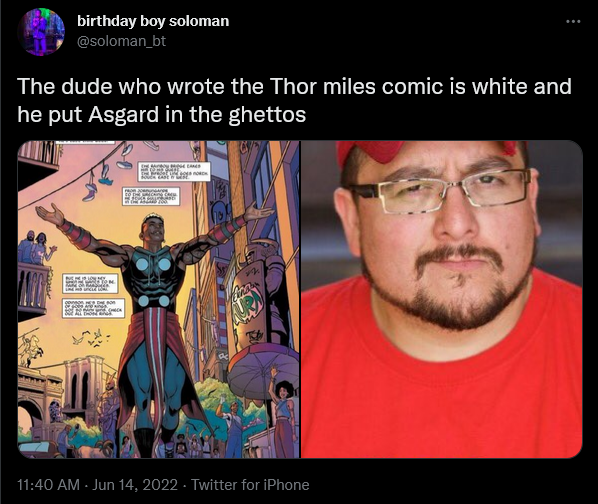 When caricatured diversity gets inserted into comics, despite the best efforts of industry professionals to toe the party line regarding their output at Marvel and DC, it almost always generates backlash among fans.

By contrast, ComicsGate has been notable for standing against these cringy representations of characters destroying franchises.

Interstingly, as seen above, it appears as if many in the mainstream industry now are following ComicsGate’s lead and adding their voices to the growing cacophony of those that are telling corporate entertainment, ‘Enough with the woke politics!’

Only time will tell if these companies will finally wake up and listen.

What do you think about the ‘black representation’ featured in the latest issue of What If…? Let us know your thoughts on social media or in the comments down below!

NEXT: Marvel Depicts Jesus Christ As A Mutant In First Issue Of Immortal X-Men [9]