Mattel is producing the first transgender Barbie with an official Laverne Cox doll.

Cox is a transgender actress best known for her role in Orange Is The New Black. Cox became the first transgender person to be nominated for a Primetime Emmy Award. With such a prominent role in streaming television, Mattel picked Cox as a representative for their diverse Barbie line.

Out.com reports [1] the doll is “giving trans girls a doll that looks like them.”

Mattel’s official marketing for the doll, which went on sale on May 25th, reads, “As a four-time Emmy-nominated actress, Emmy-winning producer, and the first transgender woman of color to have a leading role on a scripted TV show, Laverne Cox uses her voice to amplify the message of moving beyond societal expectations to live more authentically.”

They add, “She wears a triple-threat original design, featuring a deep red tulle gown gracefully draped over a dazzling, silver metallic bodysuit. Her hair is swept into glamorous Hollywood waves while dramatic makeup completes her look.”

It’s a strange marketing point as it’s unclear as to how many young girls identify as 50-year-old transwomen.

Companies have been increasingly pushing the LGBTQ agenda targeted toward children. The recent trend was heavily exposed after Florida passed an anti-grooming bill, which prohibits the teaching of sexuality and gender identity to young children in grades kindergarten through third grade.

Many parents were concerned about teachers manipulating children, starting a counter-protest movement against the alleged grooming of children into these lifestyles.

This backlash comes months after the San Francisco Gay Men’s chorus made a video declaring “we’ll convert your children.”

Major corporations appear to have been emboldened by this recent push toward encouraging children into LGBTQ lifestyles. The Disney family announced more than $1 million in donations to LGBTQ causes to combat the Florida anti-grooming bill.

Disney followed by announcing they would be inserting a homosexual kiss into their upcoming Pixar film Lightyear, a spin-off of the popular Toy Story children’s movies.

Mattel has been advertising “woke dolls” since 2019, when they announced they would be creating more “gender-inclusive dolls to encourage creative play for girls, boys, and anyone identifying as both or in between,” according to the Lewiston Tribune [4]. The dolls are aimed at and marketed at children as young as six years old.

Even though Mattel claimed feedback on the dolls was positive, they refused to share their sales data to verify their claims.

Sanja Luthra, Barbie’s managing director of Mattel Europe, the Middle East, and Africa, did an interview for The UK’s iNew [5]s stating “Barbie has always been woke. The woke debate is very recent. We introduced the Barbie Careers range around 25 years ago. We talked about President Barbie, we talked about doctor Barbie, scientist Barbie, astronaut Barbie. We’ve kind of been driving that agenda since the inception of the brand – that’s what we’ve always been focused on.”

Luthra’s claims sound like many other corporate brand managers who have stated over the years that their products have always been political. Luthra mentions Barbie having different career-based outfits to defend this, but he fails to elaborate on how generic dolls form any kind of political agenda toward children like the current crop of “woke” dolls do.

Lawrence Fox, Leader of the United Kingdom’s Reclaim Party, made a sarcastic viral tweet mocking the woke Barbie agenda, stating, “Ahead of forthcoming #PrideMonth i am educating my kids about #LGBTIQ issues. I have to say that cis barbie snogging trans barbie whilst BAME rainbow wheelchair barbie looks on is reflective of the cult of #WhiteSupremacy.”

Corporations like Mattel and Disney are known for making statements virtue signaling their allegiance toward LGBTQ causes during Pride Month, which takes place in June every year.

In 2021 Mattel tweeted, “This year, we celebrate diversity as our superpower and take #Pride in inspiring the next generation.” 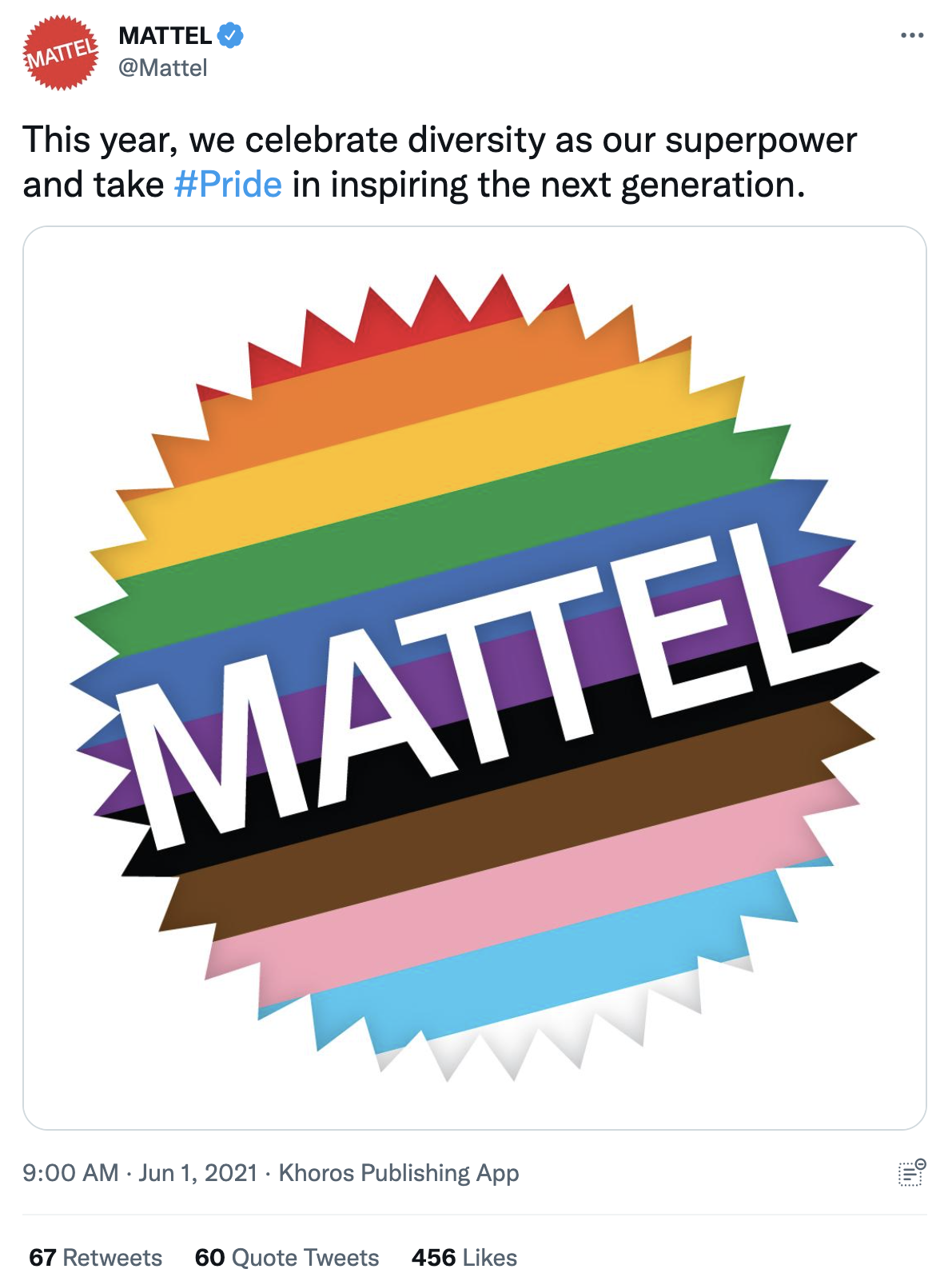 This year, they will be following up their words with their transgender Barbie doll. The question remains: are parents really buying these for their children?

What do you make of Mattel selling transgender dolls to children? Leave a comment down below!

NEXT: Mattel Apologizes After Tokyo Olympics Barbie Criticized For Not Being ‘Visibly Asian’ [6]