A line is being drawn in the sand between stand-up comedians and the LGBTQ community and the fallout is starting to get ugly.

The latest Netflix special from comedian Ricky Gervais called “SuperNature” has only been released on the platform for a few hours and it is already being labeled as transphobic by progressives in the media.

The comedy bit is also being labeled “hurtful” because some of the jokes are at the expense of the transgender community.

RELATED: Ricky Gervais Asserts People Are Getting Sick Of Celebrities Using Their Influence To Virtue Signal: “The People With Nothing Became Tired Of Being Lectured By People Who Had Everything”

In the opening act of his comedy special, Gervais dives into material about the trans community mocking pronouns and gender identity.

“Those fucking dinosaurs,” he continues. “I love the new women. They’re great, aren’t they? The new ones we’ve been seeing lately. The ones with beards and c**ks. They’re as good as gold, I love them. And now the old-fashioned ones say, ‘Oh, they want to use our toilets.’ ‘Why shouldn’t they use your toilets?’ ‘For ladies!’ They are ladies — look at their pronouns!”

The term TERF (Trans-Exclusionary Radical Feminist) was created by LGBTQ activists who criticize those on the progressive left who reject the notion that trans women are real women.

The term has been used to smear individuals such as J.K. Rowling, who despite being a progressive feminist refuses to co-sign many of the notions presented by the transgender community such as trans women competing in women’s sports.

Gervais’ jokes about the LGBTQ community didn’t stop there. He discussed Kevin Hart, who in 2018 removed himself from hosting the Oscars because he refused to apologize for a past stand-up comedy bit about a fear he had about his son having his first “gay moment.”

Commenting on the fact that Hart had already apologized and the Oscars wanted him to apologize again, Gervais said, “If there’s no value to saying sorry and evolving, he might as well just tweet ’em again.”

The comedian continued, “Now, no one saw that coming. There are no ten-year old tweets of people saying— you won’t find a ten-year-old tweet of someone saying, ‘Women don’t have penises.’ Do you know why? We didn’t think we f***ing had to!”

Later in the stand-up Gervais also joked, “The one thing you should never joke about is the trans issue. ‘They just want to be treated equally.’ I agree. That’s why I include them.”

“But they know I’m joking about all the other stuff, but they go, ‘No, he must mean that,’ right? Like a joke is a window to the comedian’s true soul. It’s just.. That’s just not the case,” he says.

From there Gervais details how he takes on different points of views to make “the joke funnier, without prejudice.”

He then cracks, “Okay, full disclosure: In real life of course I support trans rights. I support all human rights, and trans rights are human rights. Live your best life. Use your preferred pronouns. Be the gender that you feel you are. But meet me halfway, ladies. Lose the c**k. That’s all I’m saying.”

Within the first 20 hours of Gervais’ special hitting Netflix, a mountain of LGBTQ outrage poured into social media to condemn Ricky’s “hateful” jokes at their expense.

Outlets like The Independent stated ‘SuperNature’ deals in cheap jokes and humiliating trans people and gave it a 2-star review. Pink News labeled the special as nothing more than an anti-trans garbage fire.

Daniel D’Addario, who is a television critic for Variety not only trashed Gervais by saying his schtick is as predictable as it gets but then proceeded to slam Netflix by claiming the streamer is not on anyone’s side but it’s own.

Other LGBTQ activists on social media voiced their complaints about the special.

Discoutnt_Ripley tweeted, “5 minutes in and he’s making jokes about trans women attacking & raping people in public bathrooms. To him we exist only as a punchline, a threat, something less than human.” 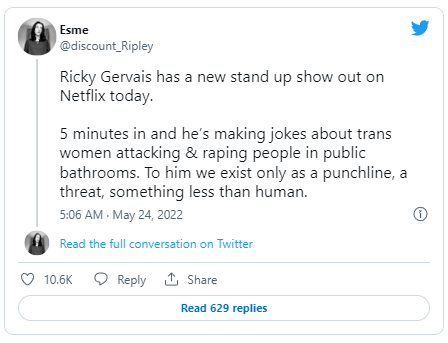 Twitter user DRamRoberts tweeted, “Ricky Gervais is a disgrace, he is going to cause hate crime and ultimately the death of Trans folk. Anyone who needs to vilify minorities to get a laugh is the most evil hateful soul and seriously needs mental help.” 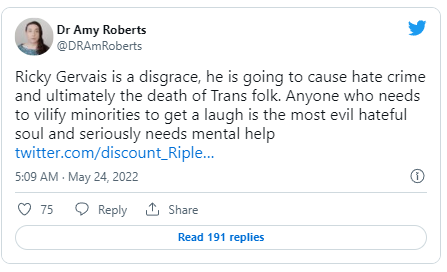 “Watching people cheer for Ricky Gervais and his new special full of anti-trans ‘jokes’ (does implying trans women are men and rapists pass for a joke these days?) just f***ing hurts,” tweeted HebanMaja. “What a great reminder that people see us as subhuman. I use to like you, man.” 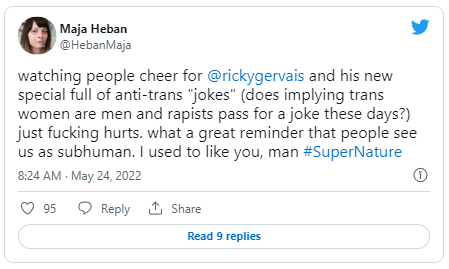 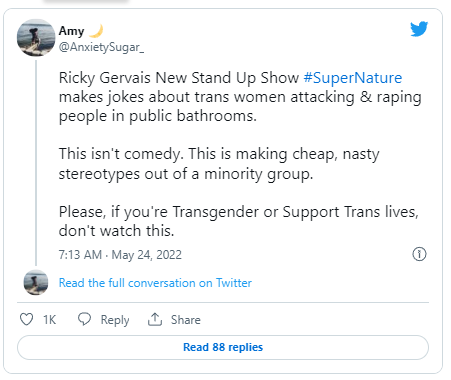 The transgender community has been on a crusade against any stand-up comedian that dares to make jokes about them. Earlier this week, Isaiah Lee, the man who attempted to assault Dave Chappelle during his recent Netflix is a Joke performance revealed that he was motivated to attack the comedian after being “triggered” by his jokes regarding the LGBTQ community.

“I identify as bisexual…and I wanted him to know what he said was triggering,” said Lee during a jailhouse interview with The New York Post published on May 22nd. “I wanted him to know that next time, he should consider first running his material by people it could affect.”

RELATED: Bill Maher Slams Lin-Manuel Miranda For Bending The Knee And Apologising To The Woke Cancel Mob For In The Heights’ Lack Of Afro-Latino Representation

While they continue their disordered crusade, some people are seeing a pattern evolve from their agenda. Last weekend, comedian Bill Maher questioned the progressive left’s push for LGBTQ propaganda on children. Maher questioned during a monologue on his HBO show “Real Time” if the recent wave of “trans kids” was natural or something being pushed in progressive left-wing circles.

“If you attend a small dinner party of typically very liberal, upper-income Angelinos, it is not uncommon to hear parents who each have a trans kid having a conversation about that. What are the odds of that happening in Youngstown, Ohio? If this spike in trans children is all-natural, why is it regional? Either Ohio is shaming them or California is creating them,” Maher stated.

Comedians are starting to take notice of the fact that many in the LGBTQ community believe that they are off-limits in the world of comedy and many are finally pushing back against that notion.

The question becomes, will big-name comedians deciding to take a stand against the progressive lobby pay off, or will the LGBTQ community who has been responsible for silencing everyone who opposes their agenda succeed in killing the art of comedy thus taking freedom of speech with it?

NEXT: Ricky Gervais Mocks Oscars, Reveals How He Would Have Opened The Show If He Were Hosting

by Paul Hair
Bounding Into Comics