Green shared her support for Depp, who is currently suing his ex-wife Amber Heard for defamation in a Fairfax County, Virginia court.

The lawsuit states, “This defamation arises from an op-ed published in the Washington Post by actress Amber Heard. In the op-ed, Ms. Heard purported to write from the perspective of a ‘public figure representing domestic abuse’ and claimed that she ‘felt the full force of our culture’s wrath for women who speak’ when she ‘spoke out against sexual violence.'”

It adds, “Although she never identified him by name, the op-ed plainly was about (and other media consistently characterized it as being about) Ms. Heard’s purported victimization after she publicly accused her former husband, Johnny Depp, of domestic abuse in 2016, when she appeared in court with an apparently battered face and obtained a temporary remaining order against Mr. Depp on May 27, 2016. The op-ed depended on the central premise that Ms. Heard was a domestic abuse victim and that Mr. Depp perpetrated domestic violence against her.”

The suit then asserts, “The op-ed’s clear implication that Mr. Depp is a domestic abuser is categorically and demonstrably false. Mr. Depp never abused Ms. Heard. Her allegations against him were false when they were made in 2016.”

“They were part of an elaborate hoax to generate positive publicity for Ms. Heard and advance her career. Ms. Heard’s false allegations against Mr. Depp have been conclusively refuted by two separate responding police officers, a litany of neutral third-party witnesses, and 87 newly obtained surveillance camera videos,” the suit alleges.

Green shared an image of herself next to Johnny Depp on the red carpet for Dark Shadows and wrote, “I have no doubt Johnny will emerge with his good name and wonderful heart revealed to the world, and life will be better than it ever was for him and his family.” 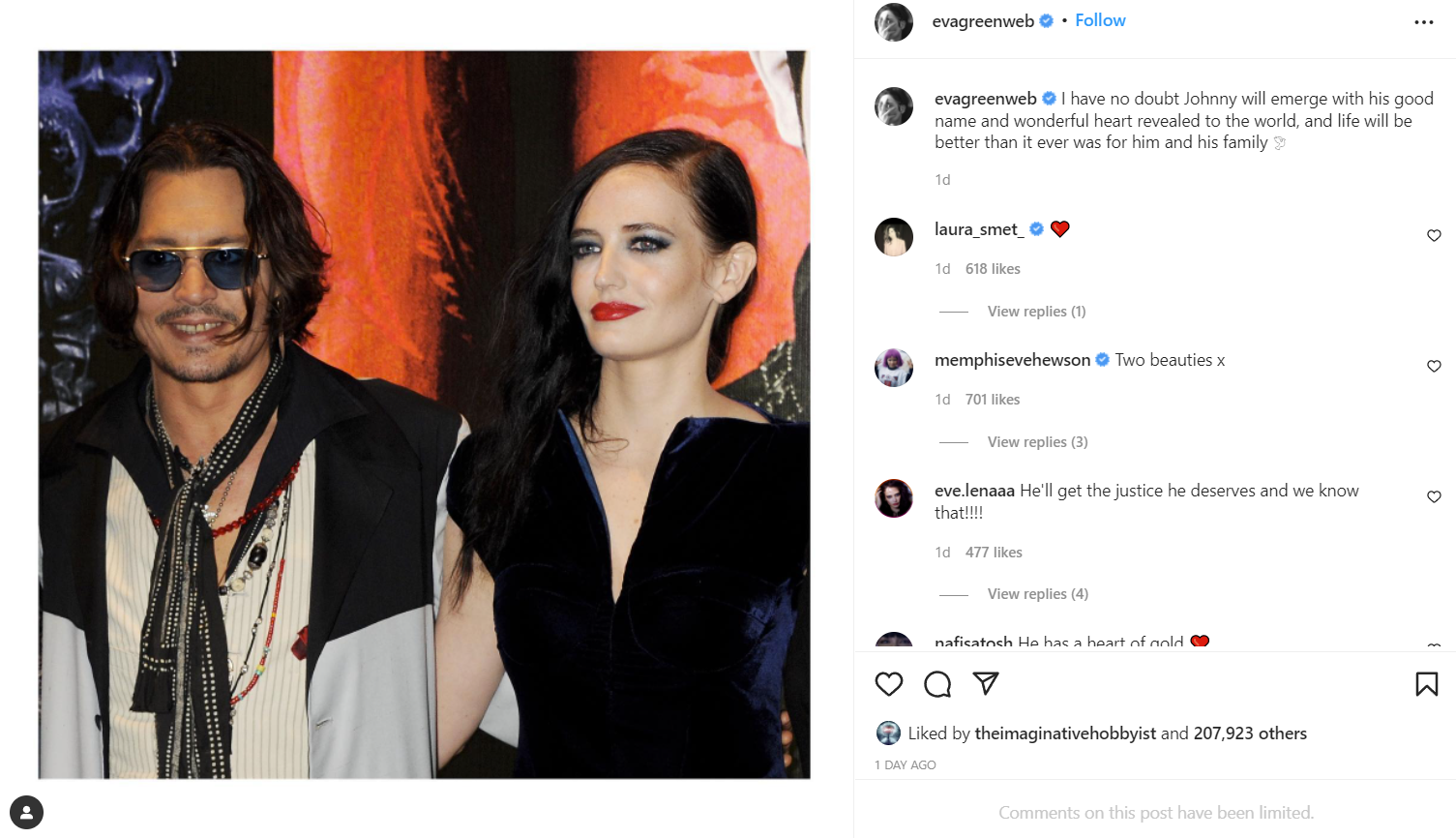 Green isn’t the only celebrity to support, Stranger Things actress Winona Ryder actually provided a statement on Depp’s behalf during his lawsuit against Dan Wotton and News Group Newspapers LTD.

As part of her statement Ryder said, “I understand that it is very important that I speak from my own experience, as I obviously was not there during his marriage to Amber, but, from my experience, which was so wildly different, I was absolutely shocked, confused and upset when I heard the accusations against him.”

“I truly and honestly only know him as a really good man- an incredibly loving, extremely caring guy who was so very protective of me and the people that he loves, and I felt so very, very safe with him,” Ryder explained.

She concluded, “I do not want to call anyone a liar but from my experience of Johnny, it is impossible to believe that such horrific allegations are true. I find it extremely upsetting knowing him as I do.”

What do you make of Green coming out in support of Johnny Depp?

NEXT: After Amber Heard Fires Her PR Team, Johnny Depp’s Bodyguard Claims Heard Punched The Actor In The Face