Doctor Strange In The Multiverse Of Madness: Sorry, Scarlet Witch Is Not A Sympathetic Character. She’s A Villain.

Doctor Strange in the Multiverse of Madness fails in trying to make Wanda a sympathetic and redeemable villain.

If you haven’t seen Marvel’s Doctor Strange in the Multiverse of Madness yet, stop right here.

I don’t want to hear your complaints about spoilers.

RELATED: Doctor Strange In The Multiverse Of Madness Review

The latest episode of the word’s largest cinematic soap opera is officially in the books, and unsurprisingly, Doctor Strange 2 was a big hit with audiences.

However, the topic of this piece isn’t the drug-like addiction Americans have to superhero movies. Instead, I want to focus on the runaway narrative surrounding Wanda Maximoff.

If you seen the film or you’ve seen the reactions to it on social media, it seems like the biggest takeaway from the latest Marvel film is that, despite all of her actions, Scarlett Witch is the real victim of this story.

To that I say:

RELATED RUMOR: Marvel’s Disney Plus She-Hulk Series Reportedly “Not Shaping Up To Be Very Good”

For those who haven’t been following the MCU too closely, let’s rewind to the events of Avengers: Infinity War.

After Doctor Strange surrenders the Time Stone to Thanos, the Mad Titan goes to Earth and reverses Wanda’s destroying of both the Mind Stone and her husband, Vision, in order to kill the synthetic humanoid himself and collect his final prize.

Then, after being wiped from existence courtesy of ‘The Snap’, Wanda comes back five years later in Avengers: Endgame, fighting alongside her fellow Avengers to help defeat Thanos.

In the aftermath of the battle, Wanda is then left wondering how to cope with life without Vision.

This brings us to “Wandavision”, the Disney Plus series whose first few episodes suggested that Wanda had been trapped in a 1950s sitcom-style reality by an evil villain.

The only problem was, Wanda wasn’t trapped, she was the trapper. It’s eventually revealed that the former Avenger had enslaved an entire town in New Jersey and forced them to live a false life against their will in order to help her cope with the loss of husband.

Of course, the series was sure to let you know that Wanda was still a good guy, despite her forced abduction of multiple people.

“They’ll never know what you sacrificed them,” Teyonah Parris’ Monica Rambeau tells Wanda as she flies away, penalty free.

But it’s okay though, she’s be through a lot, right guys?

Now we reach Doctor Strange in the Multiverse of Madness, where Wanda goes full Scarlet Witch and establishes herself as a certified villain.

While there is nothing wrong with this development in and of itself, there’s just one problem with how it plays out, as the movie ends still wanting you to see Wanda as a hero.

Wanda’s appearance in Doctor Strange in the Multiverse of Madness consists of two full-hours of her murdering dozens of innocent people – some of them with families – while pointing the finger at others and claiming her actions were justified because others have done bad things as well.

The film and its interpretation are a perfect example of what happens to society when people lose the ability to take responsibility for their actions.

The movie points the finger at Doctor Strange for giving Thanos the Time Stone and blames the former Sorcerer Supreme for willingly contributing to the villain’s killing of Vision.

The problem with trying to strike moral equivalence with this scenario is that Strange’s decision was not “the big mistake” that everyone in his own sequel claims.

RELATED: Appearance Of Anti-Communist Newspaper The Epoch Times In Doctor Strange In The Multiverse Of Madness Sparks Outrage In China

In Avengers: Infinity War, Strange explains to Tony Stark that out of millions of outcomes, surrendering the Time Stone to Thanos was the only way that the Avengers would win in the end.

By Strange’s own admission, saving Vision was impossible.

But Wanda refuses to accept this and instead copes with this reality by putting the responsibility of Vision’s death on Strange’s shoulders.

This is poor writing on the film’s part, done only to create an easy justification for the conflict between Strange and Wanda that didn’t really exist before.

One of the biggest complaints with WandaVision was, as mentioned above, the fact that Wanda suffered no consequences for kidnapping and torturing a small town for weeks.

The only way to correct this error was for Wanda to turn full heel and become the bad guy in the story.

While to the film’s credit Wanda does make this turn, audiences are continually asked throughout her villainous journey to hand her an emotional ‘Get Out Of Jail Free’ card because – wait for it – she’s been through a lot.

This, despite Wanda killing hundreds of sorcerers at the Kamar-Taj, terrorizing an alternative universe version of herself and her kids, and brutally murdering near every member of the Illuminati one-by-one for the crime of being in her way.

Hell, at one point, Wanda asks the Illuminati’s heroic version of Reed Richards if he both has kids and if their mother is alive.

After he confirms both, Wanda notes that at least his kids will be raised by their mother before shredding him like paper. Sympathetic, huh?

Wanda is a villain. She is a bad guy.

RELATED: America Chavez Creator Joe Casey Says Her Debut In Doctor Strange In The Multiverse Of Madness Is “Extremely Important” Because “Our Fictions Should Reflect Our Reality”

But the film desperately wants you to be on her side, because why? Well, she was doing it for her kids (f–k Reed Richards’ kids though, right?).

The kids that she created using magic. Who never existed.

Thus, because she committed all these acts of evil in the name of her ‘kids’, we’re supposed to automatically feel bad for her.

To quote the great American hero Brock Lesnar, “I don’t give a s–t about your kids”

It doesn’t matter how much ‘pain’ you’ve suffered. It’s never an excuse to commit countless acts of violence.

Neither does losing people close to you justify mass murder.

Everyone has lost someone close to them at some point in their lives, but most people don’t open fire at a baseball game to cope with their grief, nor would they expect any sympathy if they did.

Hollywood struggles with the 101s of screenwriting every single day, so it is not surprising that they have fundamentally failed at creating a sympathetic villain in Wanda.

A sympathetic villain is an antagonist who finds themselves at odds with the protagonist due to circumstance, not their intent.

If you want a sympathetic comic book movie villain, look no further than Spider-Man 3’s Sandman.

A bank robber who inadvertently murders Spider-Man’s uncle while fleeing the scene of a crime, Sandman’s actions were not only depicted as wrong, but the film didn’t try gaslight you into thinking they were heroic and justified.

Sandman even took responsibility for his actions and before later asking Spider-Man himself for forgiveness.

I can’t help but feel the fate of Scarlett Witch’s character fell victim to the perils of progressive storytelling.

Because Wanda is a woman, there seems to be a need by progressives to prop her up as a hero, no matter how unearned that status might be.

If those behind the MCU were willing to commit, a heel turn would have both made the most sense and led to a better storylines in the future featuring Evil Wanda.

But the studio heads just could not help themselves in trying to make her a sympathetic character when her actions are anything but. 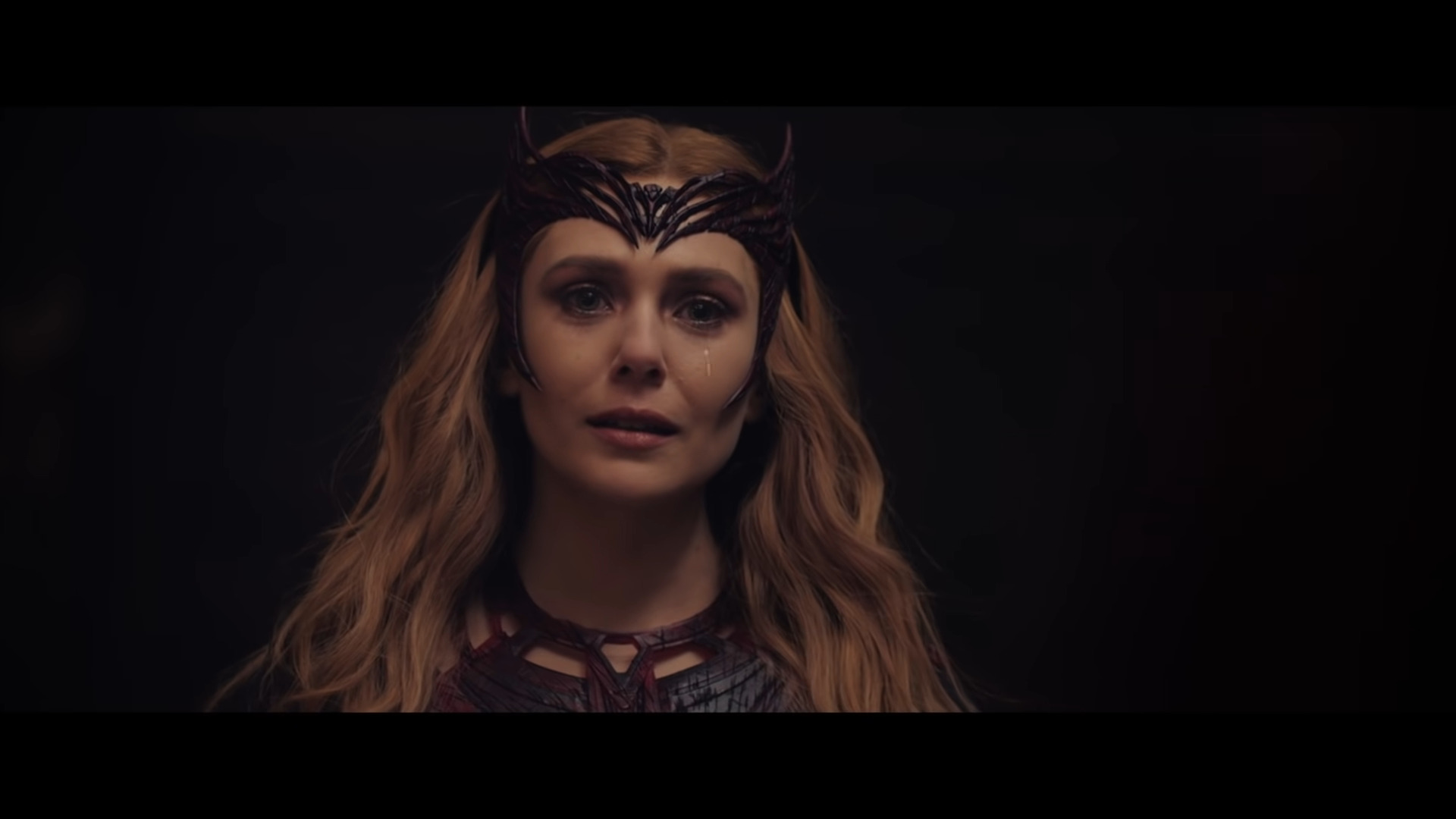 I won’t even bother to address the people on the internet who refer to Elizabeth Olsen’s character as ‘mommy’, because real life is depressing enough as it is.

The takeaway here is that, as seen in the film, you can’t expect people whose sense of morality lands Wanda in the sympathetic camp to understand the basics of heroism

Instead of continuing to try and create characters who exist in the shade of grey, how about we instead try to understand and study what makes a character’s ‘black’ or ‘white’ in the first place?

As Brock Lesnar once said: “I don’t feel pain. I ain’t got time for that. I let other people feel it for me.”

…You guys get the idea.

What do you think about Wanda’s depiction in Doctor Strange in the Multiverse of Madness? Let us know your thoughts on social media or in the comments down below!