Following her debut in the recent Doctor Strange in the Multiverse of Madness trailer, a number of Marvel fans have taken issue with Xochitl Gomez’s casting as America Chavez – and in one case, outright harassing her over it – over their belief that the Mexican actress is both too light-skinned and the wrong ethnicity to play the Puerto Rican superhero.

The 15-year-old Gomez made her first proper-but-not-yet-full Marvel Cinematic Universe appearance as Chavez on February 13th, with such shots as her being trapped by a demonic entity, running from Giganto, and traveling through the multiverse alongside Doctor Strange, briefly appearing throughout the latest trailer for the Master of Mysticism’s upcoming sequel.

While most fans were either overjoyed or found themselves rolling their eyes at the film’s inclusion of what is arguably Marvel’s most divisive character, a small subset of fans responded to this first glimpse of Chavez with anger, angrily accusing both Marvel and Gomez of colorism – or bigotry based on the shade of one’s skin color – for what they perceived as an intentional ‘light-washing’ of the multiversal traveler.

“oh whitewashed america chavez i am so sorry what they did to you,” wrote @kaludiasays upon viewing the trailer. “Just like wanda.” 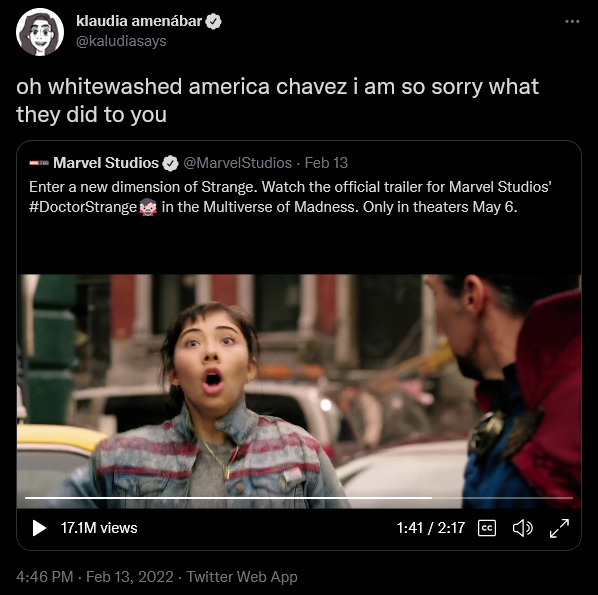 Sharing a screenshot of Gomez’s Chavez and a Phil Jimenez and Marte Garcia-illustrated variant cover for Marvel’s Voices: Pride Vol. 1 #1 featuring a darker-skinned interpretation of the character’s comic book incarnation, @ironmoom wrote, “I really need y’all to take a close look at these two pictures because absolutely what are we doing here.”

In a follow-up tweet @ironmoom added, “I do want to add since this is gaining traction that while I do wish actors were more responsible about accepting these roles I’m not really interested in vilifying poc actors for taking opportunities like this and would rather focus criticism on casting directors”.

Taking their outrage one degree further, @TheArtOfLoss replied to @ironmoom, “This was obviously a very colorist choice, and the age choice is also very weird, and probably just an excuse not to mention her sexuality.”

Retweeting @ironmooms opening tweet, @vampirestildawn declared, “America Chavez is a strong, confident, queer Afro Boricua with queer biological parents and Afro Boricua adoptive parents. I do not know who this variant in Dr Strange is supposed to be, but it’s not the character whose stories I’ve been reading for a decade.”

In one particularly disgusting moment, @vdovys took their indignation directly to Gomez, harassing the young actress and demanding she drop out of the role in favor of someone with darker skin.

“Now you know you dead wrong for taking the role of america chavez, one google search and you see that not only is she dark skin, but una BORICUA [Puerto Rican], both of which you are not,” they lashed out at Gomez, believing themselves to be righteously justified in doing so. “Ima need you to drop and put in a good word for an actual black puerto rican actress, like madison reyes or something!”

Continuing their harassment, @vdovys told Gomez, “your casting is not only colorist but racist and anti-black as hell, we are NOT interchangeable, and you just letting hollywood continue to reinforce that all us latine/hispanics are the same. Please let an actual black borica rep for us, representation is so important as you know, and yet you, marvel & co took that away.”

“It’s bout tired as hell that this keeps happening to us,” the user concluded. In response, Gomez blocked @vdovys, but believing themselves to still have a moral high ground, they attempted to mock Gomez by tweeting, “just got blocked for calling out xochitil and the america chavez role.”

Condemning the vitriol being spewed at Gomez herself, fellow co-host Geeky Sparkles opined that the mob’s anger was hypocritical, particularly as “there’s a lot of characters who are historically white and ginger, but changing them to make them darker – that’s fine!”

What do you make of the outraged accusations of colorism leveled against Gomez’s casting as America Chavez? Let us know your thoughts on social media or in the comments down below!