In response to criticism of The Witcher’s second season giving a larger focus to Yennifer and Ciri’s stories at the expense of Geralt’s, Netflix writer and producer Lauren Hissrich has declared that she is “the strong independent woman you’re looking to blame” for the series’ narrative changes.

Hissrich took credit for her work on January 6th in response to criticisms of the series’ second season made by YouTuber Jeremy “TheQuartering” Hambly.

“Henry Cavill has been totally wasted on The Witcher,” wrote Hambly in a tweet. “Geralt continues to play second or third fiddle on his own show because well…Netflix. The writers are so obsessed to force the strong independent wahmen who don’t need no man they ignore why most of us wanted to watch.”

In a follow-up tweet, he clarified, “Don’t get me wrong, I like Yen etc. but they have way too much screen time. Season 2 was a sliiiight improvement from season 1 but not enough to make me really anticipate a season 3 in any meaningful way.”

Independently finding Hambly’s tweet – as the YouTuber did not direct his criticisms towards any specific member of the series’ production team – Hissrich pushed back against his blaming of Netflix for his issues with The Witcher, replying, “Actually, I’m the strong independent woman you’re looking to blame for your sadness.”

Unsurprisingly, Hissrich’s response resulted in an outpouring of both backlash and admiration from detractors and supporters, with The Witcher producer in turn responding to numerous tweets from both sides.

In response to TheGamer Lead Features Editor Cian Maher, who stated that her “dunking on the quartering is honestly the best gift 2022 could have possibly given us,” Hissrich said of her reply, which many desperately tried to frame as a brutal zinger. “I couldn’t help it! He was blaming poor Netflix when I’M RIGHT HERE, wahmanly parts and all!” 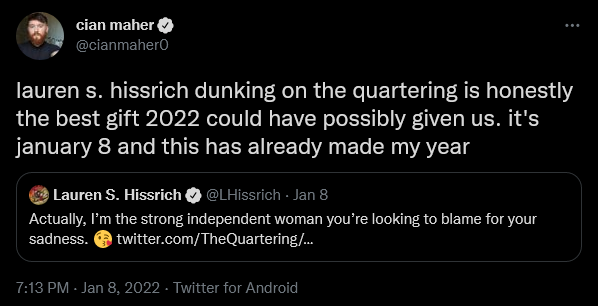 “You’re also the person who wanted to throw a cheap joke into the Roach death scene, and it was only Henry Cavill who persuaded you, a ‘professional writer’, what a terrible idea that was. I don’t think you have a whole lot to boast about right now,” said YouTuber The Critical Drinker, referencing a December 2021 interview Hissrich gave to Polygon in which she admitted that she initially wanted to punctuate Roach’s death “with a bit of meta-comedy,” only for her to change her mind after Cavill expressed his distaste with the dialogue.

“Henry was so unhappy with the line,” she told the news outlet. “Finally I said, ‘You know what, you come up with something. I trust you, you know this material so well, you know the book so well, you don’t even have to pitch it to me.’ And he came back the next day with a beautiful speech that’s at the end of Sword of Destiny when Geralt is facing death and it’s such a pitch perfect moment.”

As the YouTuber’s tweet began to gain widespread attention, Hissrich fired back with a screenshot of the script of the moment in question and wrote, “This has blown up! Here’s what was scripted, in homage of the fact that a previous Roach had existed, and another one will exist soon. It’s hardly a joke.”

“Henry wanted a longer, more emotional moment, which I was more than happy to give him,” she recalled. “Don’t create drama where none exists.”

As seen in the screenshot, Cavill’s Geralt was originally meant to comment, “You were my favorite Roach.”

Hissrich would also respond to Twitter user @ObjectionAV, who wrote, “You have to be a little bit honest with yourself, the series has some terrible writing. You can still be a strong independent woman and ask for some help, maybe from somebody that actually read and care for the books like Henry. I’m a fan of The Witcher but as adaptation is bad,”

Hissrich asserted, “I understand that you didn’t like the writing. And that’s fine. What’s not fine is presenting your opinion as fact.”

“I, personally, liked the season,” she said. “Or I wouldn’t have written it that way. Honestly.”

YouTuber Nina Infinity suggested, “Please give us more Henry Cavil on screen & listen to his suggestion of having season 3 reflect the source material more,” and “maybe just ask him to contribute to writing season 3, because he seems to be the only person that cares about the IP,”

Hissrich replied, “S3 follows The Time of Contempt which — thank god — is a much easier book to adapt in terms of events and pace of action! I’m thrilled with the scripts so far, and how we’re seeing Sapkowski’s story unfold.”

“Interesting thing is, Geralt is NOT heavy in the novel, ToC,” she added. “But we’re working hard to give him all the screen time he deserves.”

“I don’t get this take,” said the writer. “Why would you — a woman, a mother of two, just like me — want to take me down a notch for having a moment of pride? I’m genuinely curious.”

RELATED: PETA Calls For Boycott Of Netflix’s The Witcher Season 2 Due To The Use Of Live Animals

For his part, Hambly ultimately engaged with Hissrich only once , retweeting her initial tweet to him and telling his followers, “Hey, I give the lady credit for calling me out.”

“Still not a great look to be arguing with people who pay to watch your show,” he concluded. “Also your show still took a huge step back in it’s second season.”

Conversely, Hissrich has only sought to further engage with and even agitate her critics.

One Twitter user declared, “This show is dead, I loved the books and games but the writing in this …just awful.”

She responded to the tweet writing, “ROACH is dead. The show is about to start up production again.”

Hissrich has also continued to desperately project a hero-villain narrative upon her recent engagements with Hambly and others, despite the YouTuber’s above graceful disengagement from the situation.

“He-who-shall-not-be-named mentioned me and sperm in the same tweet, and I’m pretty sure that means I’ve passed some kind of coolness threshold shared by the incomparable @brielarson so I am pretty damn excited!” she wrote in a tweet posted just hours prior to this article’s writing.

Hambly did cover Hissrich’s interaction with him on his YouTube channel saying, “Netflix’s The Witcher showrunner has decided to necro like a four or five day old tweet by me and give me the drubbing that Twitter so desperately loved.”

He did add, “And I will admit my take, probably not as – my take was as a fan of really Henry Cavill and what in my mind The Witcher should have looked like and some people disagree with that. Some people think that focusing on, really strongly on strong independent women who don’t need no man in season two was great.

“I’m not saying the books didn’t kind of do the same thing. There’s obviously a lot of emphasis on Ciri, but it’s not The Witcher show I wanted to watch and I expressed that and she went on and just absolutely eviscerated me,” he stated.

What do you make of Hissrich’s response to Hambly? Let us know your thoughts on social media or in the comments down below!

NEXT: Henry Cavill Expresses His Desire For The Witcher Season 3 To Stay Truer To The Books