Move over, Green Goblin. Give it up, Venom. Step aside, Dock Ock. According to recent solicits for Marvel’s core Amazing Spider-Man title, it’s now clear more than ever that the wall-crawler’s greatest enemy is none other than the publisher’s editorial team themselves.

Though the current man behind the webs is Ben Reilly – the original Spider-clone, originator of the Scarlet Spider identity and the objectively best version of Spider-Man, period – following his progenitor’s hospitalization by the U-Foes, the recently released Amazing Spider-Man Vol. 8 #87 shows that Peter Parker, thanks to help from Black Cat and Captain America, is starting on the road to recovery and an eventual return to his iconic mantle.

However, Marvel’s solicits for its April release of the Amazing Spider-Man Vol. 9 #1 – the series ostensible reboot in order to mark Peter’s return – reveal that the web-slinger’s pseudo-homecoming will be less than joyous, as upon swinging back into action, he’ll (yet again) discover that the heroes of the 616 have turned their backs on him.

“All that, and what does Tombstone have planned?” the preview continues. “Just in time for Spider-Man’s 60th Anniversary, a new volume of AMAZING SPIDER-MAN begins, and 2022 is going to be the biggest year for Spider-Man EVER! Don’t believe us? We brought John Romita Jr. back JUST FOR THIS!”

Despite this very situation happening to Spider-Man time and time again, as seen in the aftermath to such storylines as Civil War, One More Day, and the recent Superior Spider-Man, Marvel has chosen to up the ante for this iteration of the storyline and deliver a one-two gut punch to both the web-head and his fans.

Bearing a Romita Jr. cover depicting the two walking away from each other in the rain, Marvel’s solicit for the second issue of Amazing Spider-Man Vol. 9 simply asks, “The best couple in comics is done? You aren’t going to believe what is happening in this volume of AMAZING SPIDER-MAN.” 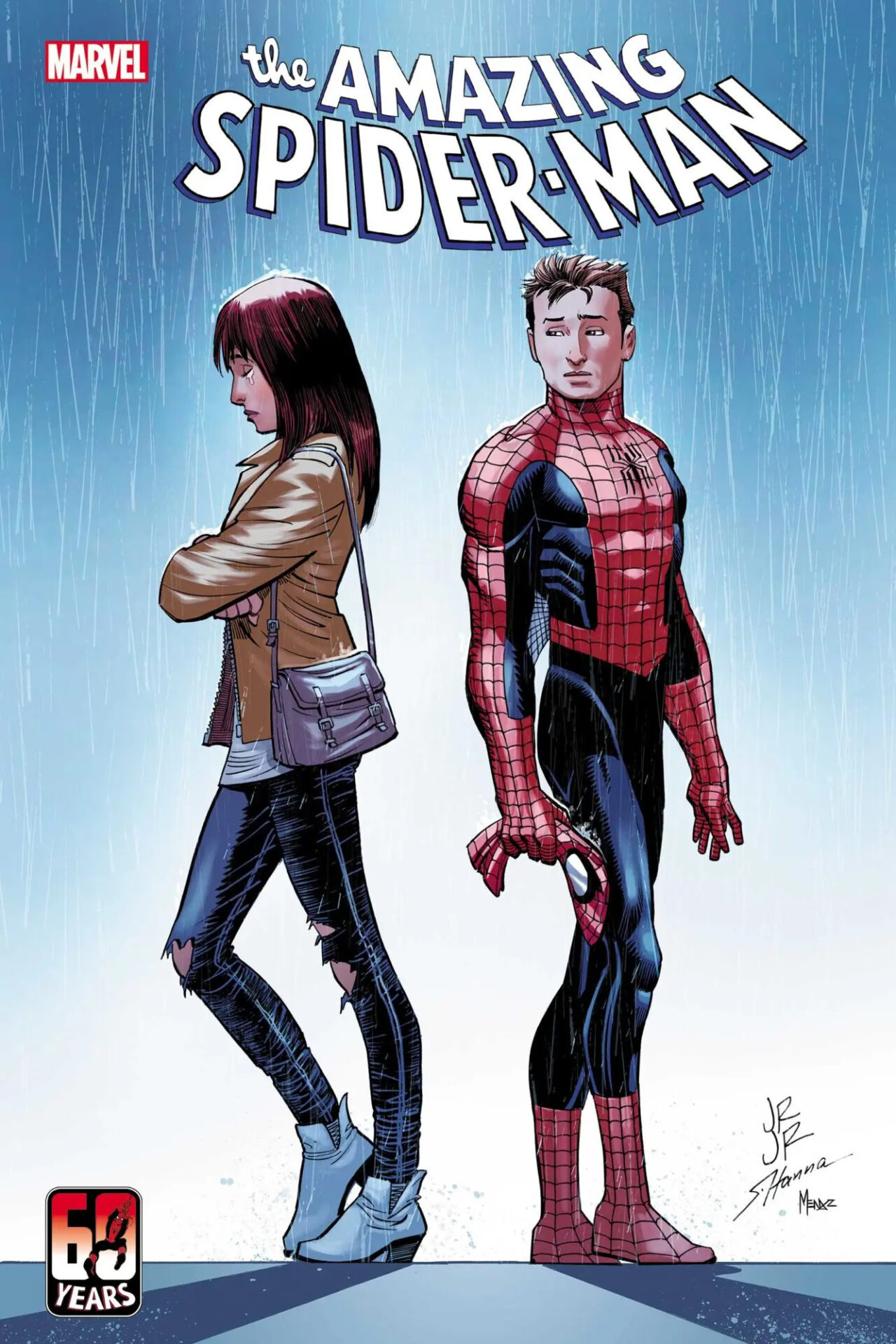 While it’s likely that there’s more to the storyline than what Marvel has teased, and thus a possibility that such a break-up may never come to fruition, even the mere suggestion of this idea comes as an insult to fans of the couple – especially in light of their recent 2018 reunion during Nick Spencer’s run on the title, which finally came eleven years after the publisher’s then Editor-in-Chief, Joe Quesada, destroyed their relationship with the One More Day story line.

“I remember editors and editors in chief lamenting that a married Spider-Man was not where we want to be,” Quesada explained his editorial decision to ABC News in 2007. “A married Peter Parker makes for a less interesting soap opera than a single Peter Parker going about his nerdy kind of life.”

It should be noted that the two Marvel icons once again parting ways would also provide the publisher with a bit of synergy with the Marvel Cinematic Universe.

In an ending no doubt partly inspired by One More Day, Spider-Man: No Way Home concludes with Peter and Michelle split apart, the latter having lost her entire memory of their time together – and even Peter as a person – thanks to Doctor Strange’s identity-concealing spell.

From Norman Osborn stealing their child (and then just dropping that plot point all together in the main 616 continuity), to One More Day, to Otto Octavius breaking the trust between the two thanks to his time as the Superior Spider-Man, one thing is abundantly clear: Marvel will never let Spider-Man grow, much less be happy.

Written by Zeb Wells and illustrated by John Romita, Jr., Amazing Spider-Man Vol. 9 #1 and #2 are set to hit shelves in April.

What do you make of Marvel potentially breaking up Spider-Man and Mary-Jane? Let us know your thoughts on social media or in the comments down below!

Disney And Marvel Studios To Create New Daredevil Series, One Report Claims It Will Continue The Netflix Series