Mark Hunt’s anger towards the UFC is well documented.

The former heavyweight title contender remains in the fight with Dana White and others.

Hunt recently challenged the UFC president and former owners Frank and Lorenzo Fertitta. His issue comes from having to fork over money in a legal battle.

According to MMA Fighting [1], the United States District Court in Nevada is ordering Hunt to pay $388,235 in attorney fees and costs to his former employer.

Hunt took to social media and issued challenges to White and both Fertitta’s, former executives in the company.

“Mark the super Samoan vs Dana the parasite white Lorenzo Fertita and frank fertita,” Hunt posted on Instagram. “5 rounds mma these losers @danawhite frank Fertita Lorenzo Fertita have sucked the life out of so many fighters him and his scum friends.

“u win I drop the law suit-I win u pay every fighter u have ripped off since @ufc started now who would pay to see that.” 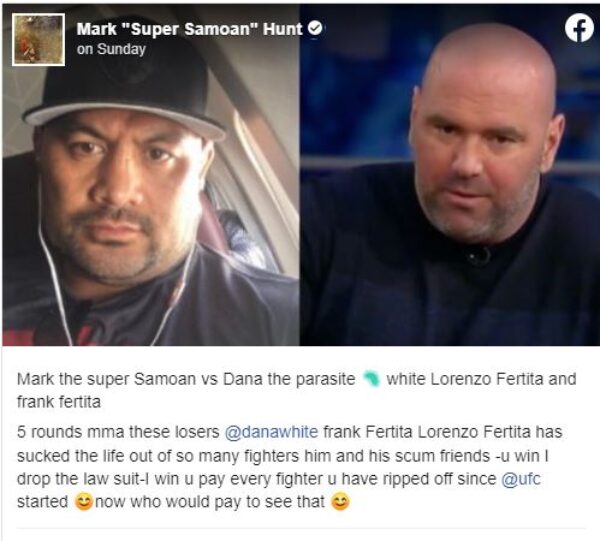 Hunt’s case stems from his 2016 fight at UFC 200 with Brock Lesnar. After, Lesnar tested positive for banned substances during both in- and out-of-competition tests.

Hunt believes the UFC knew and ignored the test results, hiding them to keep Lesnar available for the fight. Most of the charges were dismissed in 2019.

In 2021, Hunt filed an appeal, bringing the case back to the courts.