Despite the show taking inspiration from his work, artist David Aja will receive no credit or pay for Marvel's Disney Plus Hawkeye series.

Despite his and writer Matt Fraction’s (for better or worse) popular run on the character serving as direct inspiration for the show’s aesthetics, straight down to one of his covers being recreated for the Disney Plus series’ marketing material, artist David Aja wants Marvel and Disney to “stop crediting, start paying.”

Related: Hawkeye Actor Jeremy Renner Reveals Stand-Off With Marvel Over Demand For More Time To Spend With Daughter: “I Said, ‘Fine, Recast Me.’”

Aja appeared to note his lack of pay for Hawkeye on October 24th during a discussion of the show’s official promotional poster, which – as noted above – recreates the artist’s cover (seen above) for Hawkeye Vol. 4 #6 (2012).

The artwork, specifically its purple third printing color variant, was also used as the cover for the second trade volume of Hawkeye Vol. 4, Little Hits.

In response to a fan excitedly declaring that the “official poster paying homage to the matt fraction comics is the coolest thing ever,” DC Comics artist Bruno Redondo (Nightwing Vol. 4, Injustice 2) pushed back, “Stop crediting JUST writers, mostly when the visual tribute is… just that, straight based on @davaja cover.”

“Comics are a team work,” he continued. 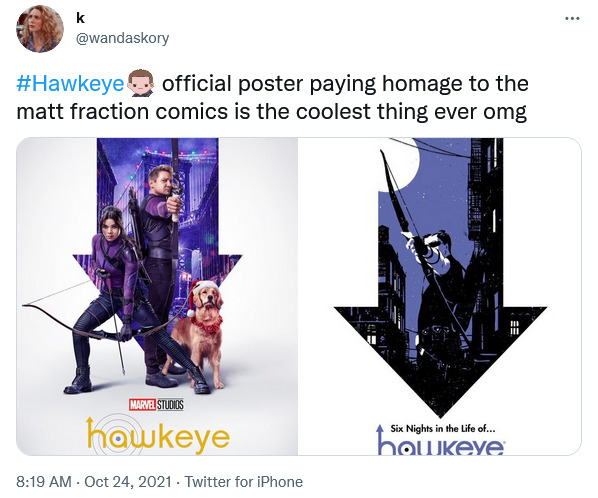 Circling back, said fan apologized for “not crediting @davaja soon enough,” adding, “this hawkeye run wouldn’t be what it is today without him and all the other people involved. also PAY THEM wtf !!”

Aja is credited on the first episode of Hawkeye.

Fraction was also employed by Marvel Studios and Disney+ as a Consulting Producer on Hawkeye.

Related: Ta-Nehisi Coates Calls Out Marvel And Their Treatment Of Creators: “It’s Not Pretty At All”

Though it’s unclear what if any Aja’s compensation is, unfortunately, it’s not the first time Marvel Studios has been embroiled in a pay dispute with their comic book creators after heavily adapting their work.

Disney is also embroiled in a scandal where they are refusing to pay a number of their creator for rightfully owed royalties.

Brought to public attention by the still-ongoing Disney Must Pay campaign, Disney has denied rightfully owed royalty to a plethora of creators, including prominent Star Wars authors Alan Dean Foster and Michael A. Stackpole, whose works were acquired by the company by way of their purchase of such companies as Lucasfilm, Marvel, and Fox.

The first two episodes of Marvel’s Hawkeye are now streaming on Disney Plus.

What do you make of the fact that Aja will receive no credit or compensation for Hawkeye? Let us know your thoughts on social media or in the comments down below!

by Michael Austin
Bounding Into Comics

Star Wars Novelist Continues To Trash The Book Of Boba Fett, Explains Why Episode 5 Is The “Best Yet, Hands Down”

Ryan Bader: ‘I Am Not Done Yet, Feel That Fire’

Former Champion Darrion Caldwell Ready To Put On A Show