In 2019, Donny Osmond was at risk of losing his ability to walk and even move his arms. The pop icon was finishing up an 11-year headlining residency in Las Vegas with his sister, Marie. By the end of the show, Donny felt numbness in his arms and legs.

But Donny, being a showbiz veteran and pro, kept dancing throughout the show [1] and never let anyone know he was in such pain. He even came in second place on the first season of The Masked Singer that year.

Donny underwent surgery and began recovery, but that led to a severe infection [2].

“I thought everything was going to be fine, but it couldn’t have been worse,” he says. “I got a secondary infection which meant I wasn’t able to move.”

Donny injured his spine during his season-winning performance on Dancing With the Stars [3] in 2009.

His injury got so bad that Donny had to rely on a walker during his recovery. But with faith, devotion, and a lot of help from experts, Donny was able to not only walk again but DANCE again.

The Osmonds are known just as much for their singing as they are for their unwavering faith in God. The Mormon family bucked many secular and Christian music trends by obtaining mainstream appeal without abandoning their faith in Jesus.

In fact, Donny credits his deeply held faith with getting him through the surgery and back to recovery.

“It was my faith, a lot of hard work and positive thinking,” he says.

His family was also by his side, including his wife of 43-years Debbie, his five children, and 12 grandchildren.

Besides the “I FEEL OLD” feeling of knowing that Donny has 12 grandkids, I am in awe that Donny remained steadfast in his faith through all of this.

I feel like it’s so common for people to “expect” something from God, and when it doesn’t happen, they “lose their faith.”

Faith isn’t about what God can do, but what you can do THROUGH the power of God. Donny wasn’t sure he could make it through this trying season, but he knew having a positive attitude and focusing on the future would get him through it.

Ever the optimist, Donny Osmond, took time off to write and record his brand new album, Start Again. The album is the first that he produced and co-wrote on his own.

Heck, I remember when I broke my collar bone, I laid up for 2 months and rode a stationary bike and thought THAT was an accomplishment. Donny broke his dang back and decided to record a hit album. WAY TO RUB IT IN, DONNY!

In his new music video for “Who,” Donny Osmond looks like he’s back to classic form, singing and dancing in this poppy and modern tune.

Donny has been in the show business for nearly 50 years. And he’s still cranking out hits. 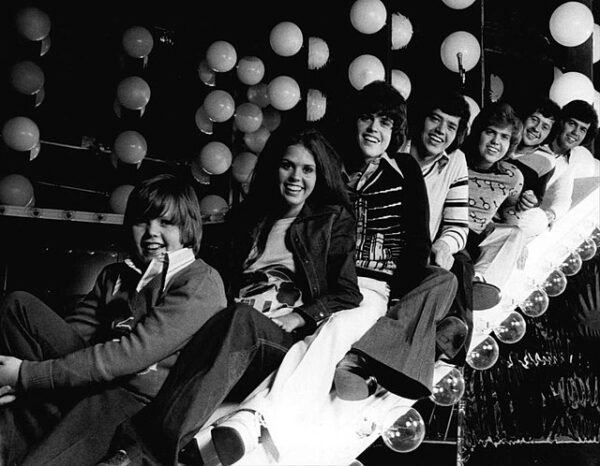 I grew up on the Osmonds [4]. I loved their positive attitude and that their faith was never changed by the trials and tests of Hollywood and fame.

My parents loved watching the Christmas special, including this one with my grandmom’s favorite, Andy Williams.

What’s your favorite Osmond family memory? Let us know in the comments below.