Rumor: Henry Cavill Met With Disney But Is Not Currently In Talks To Play Marvel’s Captain Britain

Henry Cavill allegedly met with Disney's people in London, but it doesn't sound like they sealed a deal for him to play Captain Britain.

According to a new rumor, Superman actor Henry Cavill has allegedly met in secret with Disney at their offices in Lodon.

As reported by a source to UK entertainment outlet Small Screen, Cavill had the sitdown with the House of Mouse people back in May, with the source noting that the actor was “very intent” on meeting “face-to-face” while also observing all proper COVID protocols.

What was the purpose of the meeting? That’s still a mystery as says Small Screen Edward Lauder wrote, “Was this for an upcoming project? Well, I wasn’t told anything about that.”

However, we do know one thing: a major rumor can be put to bed, and that is Cavill is not up for the role of Brian Braddock – better known as Captain Britain.

Lauder wrote in a follow-up he learned from another source that the Limey Captain, aka Brian Braddock (brother of X-Men’s Psylocke), is not at all “on the menu” over at Marvel just yet.

“All I know for sure is that Marvel Studios isn’t looking at Henry Cavill for the role of Captain Britain,” said the source. “They don’t have any plans to bring Captain Britain to the MCU at the moment.”

Thanks to a brief mention in Avengers: Endgame it’s been established that Braddock family line exists in the Marvel Cinematic Universe, but Lauder believes Cavill’s fame and price are too high for Disney, who might opt to go with an unknown actor instead. 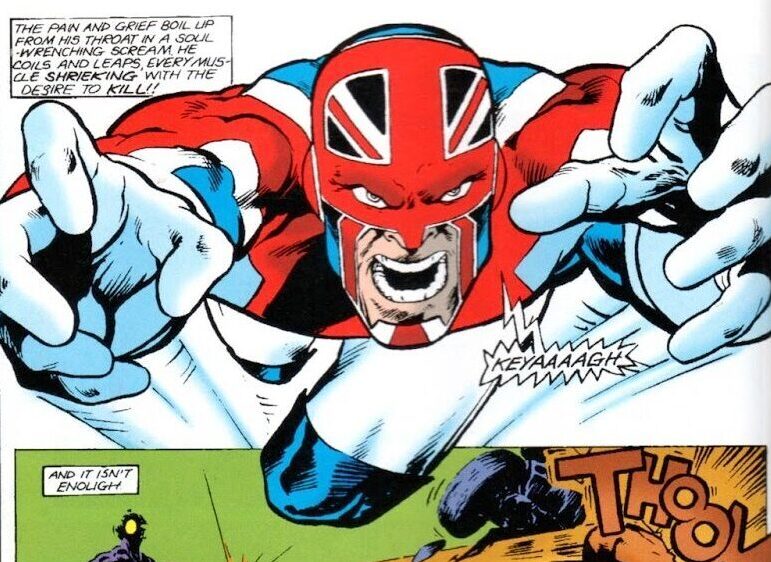 Related: My Adventures With Superman Described As “Romantic Comedy” That Has Thus Far “Tested Better With Girls”

If he were to join the MCU it’s possible, looking at the emphasis on Kang and Lady Loki’s ‘alternate timeline’ existences in Disney+’s Loki, that Cavill would be cast as an alternate of Braddock without any explicit connection to the Captain Britain identity.

After all, Lauder notes, Marvel has grown into the habit of swapping and heavily modifying their library of characters when and if they make the jump the the MCU – Just look at the change in The Mandarin from Iron Man 3 to Shang-Chi.

Lauder further speculates that Brexit, overflows of nationalism, and an intention of staying apolitical might also have something to do with a potential Cavill casting avoiding the Union Jack tights, at least in the live-action sphere.

However, on the subject of how the animated What If…? series will have a version of Captain Britain and Braddock, the scooper notes that this story takes place not only a standalone alternate reality, but also in a a cartoon (as opposed to a live action appearance).

If Cavill does sign on the dotted line with Marvel, he will have to figure out where a role as Britain’s premier champion can fit into his busy schedule, as he is currently attached to a number of projects, including Season 2 of The Witcher, a Highlander reboot, Enola Holmes 2, a Matthew Vaughn-directed spy thriller called Argylle, and the film adaptation of novel The Rosie Project.

Another interesting point to note is that, though Marvel may have spoken to the actor, Warner Bros. could still give Cavill a call about appearing in a Man of Steel sequel (which the rumor mill indicates has a fighting chance even though WB is developing other Superman projects based around Kryptonians of color).

However, for now, we’re left to just sit back and speculate on what Cavill’s potential future affiliation could bring in the coming years.

What do you make of the rumor that Cavill has met with Marvel about appearing as an alternate version of Brian Braddock? Let us know your thoughts on social media or in the comments down below!

Shang-Chi and the Legend of the Ten Rings Review: A Ten-Ring Circus