The WWE loved to use some authority figures [1] throughout its history. But which were the most remarkable and prominent throughout the history of the company?

When you think of the best authority figures in WWE history, you certainly think of Eric Bischoff [2]. After all, he was one of the most polarizing figures during the Monday Night Wars.

Of course, Eric Bischoff was working for a rival promotion at the time. But eventually, he made it to WWE as well.

Bischoff made his WWE debut in 2002. From this point, he became RAW’s general manager.

Eric Bischoff would remain with the brand for three years. However, he would not be inducted in the Hall of Fame until this year.

The relationship between Bischoff and the WWE [3] has not always been that great. But you have to give it to the man, we are still talking about him!

Teddy Long [4] is probably not the first person you think about when discussing the best authority figures throughout WWE history. However, he was certainly an influential one.

Long actually started as a referee for the WWE from 1998 to 2002. During his early career, he also managed the likes of Mark Henry.

Eventually, Teddy became one of the best authority figures in WWE history. However, the reasons why may surprise you.

Long was the first African American man to hold an authority figure role in the WWE. He also subjected his underlings to singles matches against The Undertaker (which was fantastic).

There never was an authority figure quite like Teddy Long. Unfortunately, he remains heavily underrated and stands in the shadow of Bischoff and McMahon [5].

Aside from being one of the most enigmatic professional wrestlers [6] in WWE history, he was also one of the best authority figures. Of course, his approach was quite different compared to the other figures in our list.

Foley’s authority journey started with being the WWE commissioner. But instead of a hated figure, he actually became King of the Wrestling Nerds.

Mick Foley’s name was always synonymous with chaos and mystery. Obviously, the same could be said for his reign as the WWE Commissioner.

One of the funniest things about the Commissioner was his office.

Instead of an office, Foley found solace in his usual haunts. From the boiler room to the building’s cellar, they were all Foley’s home ground territory.

Mick Foley would make another appearance as an authority figure from 2016 to 2017. Only this time, he returned as the general manager of RAW.

Throughout his second stint, Foley had to deal with Stephanie McMahon and her nefarious plans for the RAW roster. However, this stint never reached the heights of his time as the WWE Commissioner.

In spite of his authority figure stints, Mick Foley is still remembered more for his iconic wrestling days. After all, Foley was certainly one of the craziest wrestlers on the roster.

Put through a cage by the Undertaker with his teeth stuck through his nose, this is just a small example of the wicked Mick Foley. And who could forget about Cactus Jack [7] and Dude Love? 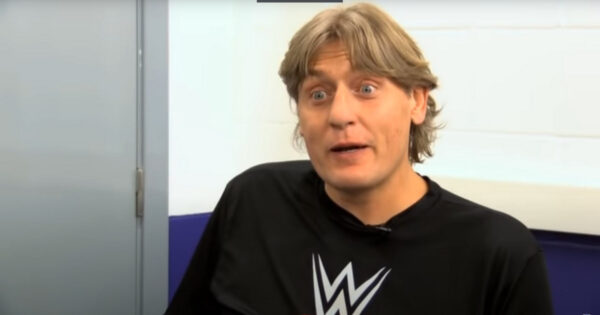 I have a special place in my heart for William Regal [8]. Don’t ask me why, I just do.

Much like Mick Foley, Regal was an outstanding wrestler before he became one of the best authority figures in WWE. Until this day, I do not think anyone actually matches Regal.

William Regal took up the position of general manager of NXT in 2014. And he has held that position ever since.

Of course, Regal also held some prominent roles on the WWE’s main brand. However, I do not believe we saw Regal’s full capabilities as general manager until he became general manager of NXT.

Regal balances the line between hero and villain beautifully. And while he was one of the most effective heels in history as a wrestler, people adore him as the NXT general manager.

William Regal is currently involved in a storyline with Karrion Kross. It led to the beatdown of the general manager, so we wonder what the repercussions will be for Kross.

Looking back at his history, we all know that William Regal can hold a grudge. Could we see a darker side of the general manager in the nearby future?

In short, William Regal has kept me interested in NXT. That’s all you can ask from a general manager is it not?

Vince McMahon has been a constant authority figure [5] in the wrestling world. Of course, his original role in the WWE was much more tame than it is today.

While Vince McMahon commentated and appeared on television, he was far from the evil villain he portrays today. Of course, until Vince found out that his villain persona translated into lots of money.

In recent years, McMahon has stepped back from his authority figure somewhat. Instead, the company focused on the likes of Stephanie McMahon and Triple H.

The most recent appearance of Vince McMahon was a rather tame one as well. In fact, the WWE Chairman came out to welcome the crowds back to the arena after the pandemic.

But while he has taken a step back, Vince McMahon is the first name that comes to mind when you think about a wrestling authority figure. You could even argue that there is nobody that even reaches his level.

While the WWE chairman is still not showing any signs of stepping down from his brand, it is unlikely that McMahon will play any major roles [9] in storylines in the years to come. Nevertheless, we have plenty of memories to hold onto.

From sacrificing his own daughter to the Undertaker from trying to get his wife committed, there is nothing Vince McMahon hasn’t done. In short, he is arguably the most evil authority figure that ever graced our screens.

Question remains, who will take over the mantle once Vince McMahon steps down?