Country music star Jason Aldean and his wife Brittany are two of the few celebrities who are not afraid to share their conservative political views.

On Thursday night, Brittany got candid with her fans about how she has the courage to be open about her political views that may go against the grain.

During a question and answer session on her Instagram Story, Brittany was asked, “What helped you be more open about your political views on here when most people don’t agree?”

Fox News reported that Brittany replied by saying that she gets more support from her fans than it may seem.

“I think you’d be surprised how many people do agree but aren’t able to speak about their views. (And understandably so),” the 33 year-old responded. “The amount of supportive messages I get is unbelievable.”

Brittany went on to explain why she doesn’t pay any attention to her critics.

“I personally don’t give a damn if people don’t agree with me,” she said. “I think it’s important now more than ever to stand for what you believe, even if it ‘goes against the grain.’ Do your research, and form your own opinion – speak out if you wish. But most importantly, don’t bully people who feel differently than you.” 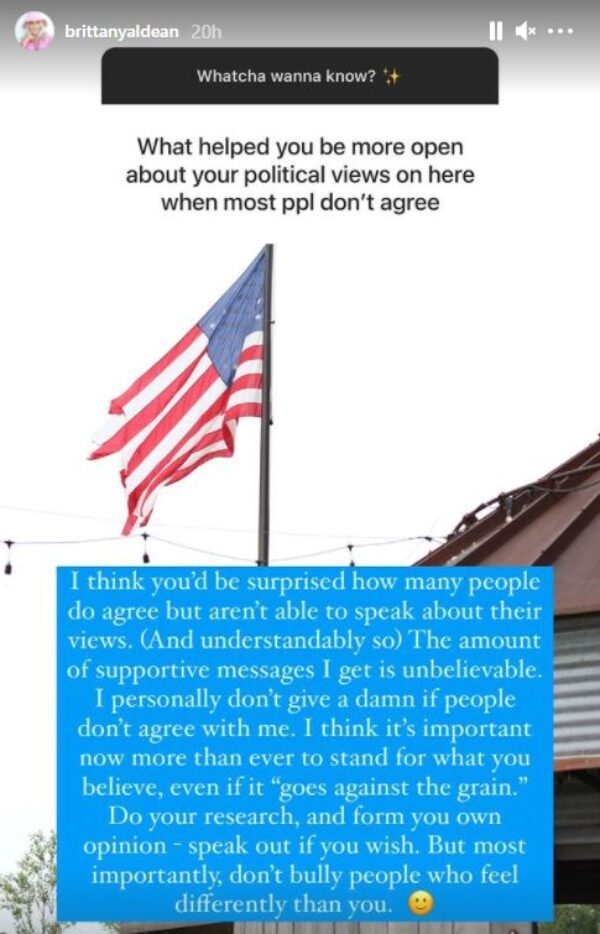 During this same Q&A, Brittany Aldean revealed that the scariest moment of her life came in 2017, with the shooting at the Route 91 Harvest Festival that took place while her husband Jason Aldean was on stage performing.

“I was 8 months pregnant. People in the crowd. Friends all around. You can’t really understand the trauma unless you’ve been in a similar situation. Still heartbroken. Still shake when I speak about it,” she wrote in her Instagram Story alongside a broken heart emoji.

Brittany has long been an outspoken proponent of free speech, frequently reminding her fans about why it is such an important right in America.

“Apparently freedom of speech doesn’t apply to everyone and that’s the issue I have. I have AMAZING conversations with my liberal friends and we can agree to disagree. It’s the people that aren’t willing to hear you that chap my a–,” she said in January after the Capitol riot.

Brittany was also open about her support of former President Donald Trump, and she publicly lamented Joe Biden’s victory.

She recently posted a video of herself in a blue sweatshirt with Trump’s name on it next to an American flag with a caption that read “… STILL MY PRESIDENT.”

When Brittany was hit with backlash for this, she fired back by defiantly saying that she will keep speaking up about her support of Trump for the people who can’t due to fears they’ll lose their job or status in their community.

If only we had more celebrities who were as courageous about expressing their conservative political views as is Brittany Aldean.