The last pay per view before leaning the ThunderDome [1] is WWE Hell in a Cell 2021. We got a pair of cell matches and here is the report from each match.

Alexa Biss’ new gimmick has dramatically lost interest the past month. Unfortunately, it is also resulting in Shayna Baszler being misused.

Baszler got the upper hand early before Bliss somehow got in the in the mind of Nia Jax at ringside. The result was Baszler being afraid to stare at Bliss, which ultimately cost her.

I was expecting nothing less of Bliss until The Fiend returns [2]. Then, she might have to pay for her sins at WrestleMania 37. Grade: B-

Right before the show went live, WWE added Natalya vs. Mandy Rose. It was a veteran taking on someone the company has high hopes for.

Both female superstars had their respective partners on the outside. But, they did not play much of a role.

Mandy looked good out there in singles competition, although she is no Natalya. Surprisingly, the match was better than I thought.

Natalya left the winner on the pre-show. So, it makes me wonder what is the point of Rose keeping losing to the tag champs. Grade: B

So, Kevin Owens and Sami Zayn are once again battling. Therefore, this marks their 100th WWE match and 500th overall.

Whenever these best friends meet, you know they are gong to deliver. The biggest issue is WWE has plenty of other programs to book both men in. 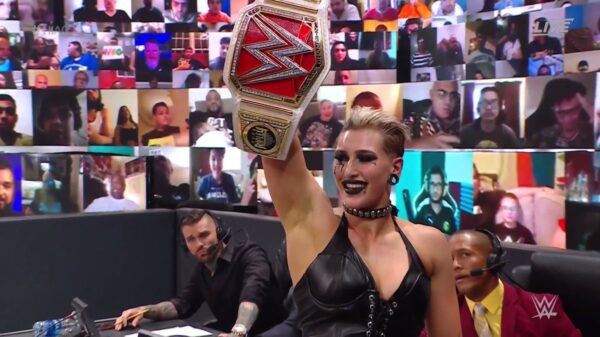 While Charlotte Flair and Rhea Ripley have only met a few times, their feud has lasted over two years. They are both talented and will continue their chemistry until at least SummerSlam [23].

As expected, Flair focused on the knee and leg of Ripley. It was good old-fashioned slugfest with some uncertainty on who was the face and heel.

The disqualification ending would leave a live crowd livid. Lucky for WWE, they have a few more weeks to control the crowd via the ThunderDome. Grade: B

These two have been feuding on and off since before WrestleMania 37. There was so much tension, Seth Rollins decided to jump Cesaro.

This encounter was fun to watch, but not their best showing. Cesaro managed to get the swing, although it cost him the match.

So, WWE has two options here. They can meet again or Rollins might be closing in on a SummerSlam match with Edge [32]. Grade: B+

Hell In A Cell Match For The SmackDown Women’s Championship: Bianca Belair vs. Bayley

Unless I’m wrong, this marks the third time female superstars have entered Hell in a Cell. Bayley walked in with the advantage, despite losing her lone Cell match.

For large portions of match, Bayley tied Bianca Belair’s hair to various objects. Now, that is a true heel.

Yet, Belair proved to be better than Bayley. After plenty of weapons were used, including a ladder, Belair remains SmackDown Women’s Champion. Grade: A-

Last Chance Hell In A Cell Match For The WWE Championship: Bobby Lashley vs. Drew McIntyre

Like the title of the match says, this was Drew McIntyre’s last chance. The biggest question heading into the bout was if Brock Lesnar would play a role.

Like anytime they met in a ring, some major shots were thrown. Basically, adding in the Cell and weapons only increased the punishment.

I would say that was the most brutal of the two Cell matches. Lashley walked out still WWE Champion, but that was their best match and both looked great out there. Overall, that was a good feud and brutal conclusion. Grade: A-