Twitter suspended Rose McGowan after the actress tweeted an unflattering art piece of Bill Clinton. She responded by slamming the platform.

Actress Rose McGowan is speaking out after being suspended from Twitter for criticizing Bill Clinton. She’s also taking aim at Democrats for attempting to silence her.

The “Charmed” star is one of Harvey Weinstein’s most vocal victims. She’s been a prominent women’s activist. Now she’s calling out the hypocrisy of the left and the giant social media platform.

McGowan was shocked at the tone deafness of Vice President Kamala Harris having a public discussion with Bill Clinton on “empowering women and girls.”

The former president’s treatment of women is well documented.

Juanita Broaddrick has accused him of rape for decades. And, who can forget Monica Lewinsky?

Then of course there is his association with pedophile and human trafficker Jeffrey Epstein.

It’s shocking the first female Vice President would join in such a conversation with someone with such a reputation.

And, that is what McGowan was pointing out before the Twitter police got involved.

The actress tweeted an image of Bill Clinton getting a massage from a scantily dressed woman. It is actually a piece of art created by British artist Alison Jackson, but Twitter didn’t approve.

McGowan tweeted the artistic photo and stated “Photo taken on Epstein Island.” A screenshot of the part of the artwork is in the tweet below. 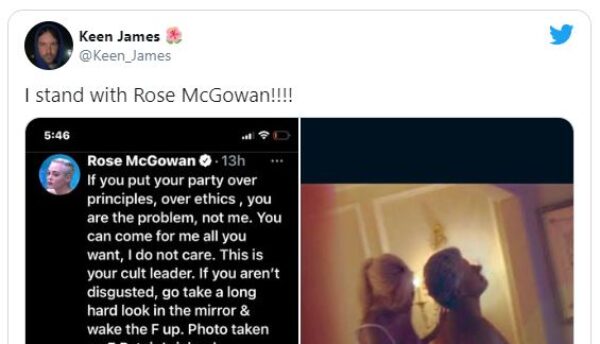 She also tweeted about the event taking aim at Democrats for rolling out the red carpet for Clinton while women are fighting back against male predators like him.

RELATED: Rose McGowan Calls Alyssa Milano ‘The Leader Of Karens’ After 911 Call That Ended In ‘Squirrelgate’

“If you put your party over principles, over ethics, you are the problem not me. You can come for me all you want, I do not care,” she tweeted. “This is your cult leader. If you aren’t disgusted, go take a long hard look in the mirror & wake the F up.”

Twitter’s official reason for the suspension is for “sharing privately produced/distributed intimate media of someone without their express consent.”

But this consideration wasn’t given to former President Donald or former First Lady Melania Trump. Similar art could be found on Twitter without retribution from the platform.

McGowan recorded a video explaining how and why she was suspended.

She even accused Twitter CEO Jack Dorsey for “supporting evil.”

Rose McGowan’s account has been shadow banned for years after she publicly called out Harvey Weinstein for assaulting her.

This means Twitter limits who can see her tweets in their feed. Now the platform has taken it further by suspending her account for her activism.

As it happens, McGowan’s Twitter account is now viewable if you go to the page. But, the “problematic” tweets are now gone.

Nothing new is visible since March 23rd. What do you think about that?