In this special edition, each one of our Bounding Into Comics writers picked one respective item for The Daily Stupid.

Not only that, but we did a special livestream on it, where we each shared our picks live. Let’s get to it.

In his write-up Pierce laments the fact that a man named Mark Ponder was detained by police on January 6th and then subsequently released as the police were needed to restore order elsewhere.

He writes, “And while I have no doubt that the Capitol Police were overwhelmed that day—and let’s talk some more about why the cavalry didn’t show up—but it’s impossible to imagine this kind of scenario if the detainee were Black, or of a different ideological position.”

The complaint also details, “After being physically taken to the ground and detained on the Upper West Terrace, MPD Officer #4 began the process of arresting and transporting PONDER from the Capitol Grounds. However, due to the chaotic nature of the day, the arrest was not completed on January 6, 2021. At approximately 3:15 p.m., PONDER was released without charges by MPD Officers #3 and #4 because a transport vehicle was unable to reach the Capitol Grounds and because the officers were ordered to respond back to the riot to assist with crowd control.”

What makes this even worse is that Pierce actually linked to the original Politico and cited it multiple times in his write-up. However, he apparently never decided to look at the original criminal complaint once. And if he did, then he simply thought he could pull the wool over everyone’s eyes.

Charles P. Pierce, you are a complete and utter idiot. But it’s not just you that are an idiot. The fact this got past editors at Esquire makes them big dumb dumbs too.

My nominee today is Liam O’ Mara, a Democratic House candidate from California’s 42nd District, who tweeted an incredibly racist reply depicting a KKK hood to Candace Owens, and instead of backpedaling, continued to double down.

O’ Mara would respond with a terribly racist tweet, showing a picture of a KKK hood, and saying, “Yikes. You may’ve dropped this.”

A user named At the Regal Beagle replied to O’ Mara, saying, “You seriously just tweeted this to a black woman? You need help.” O’ Mara would double down, inexplicably accusing Owens of “white supremacist” arguments and calling her a “paid propagandist.”

For someone with a supposed P.H.D., Mr. O’Mara is incredibly stupid.

In the wake of the recent mass shooting in Boulder, CO, a depressing but unsurprising amount of social media users were quick to blame ‘white people’ for the tragedy, with many even asserting that the suspect was a ‘white male’ before any concrete information was known.

One such user was Deadspin editor Julie DiCaro, who following the shooting, rushed to virtue signal by asserting to her Twitter followers that she was “Extremely tired of people’s lives depending on whether a white man with an AR-15 is having a good day or not,” a reference to the false narrative that Cherokee County Sheriff’s Office Captain Jay Baker described the Atlanta-area spa shootings as the result of the suspect having “a bad day”.

Yet, DiCaro’s eagerness to push a racist narrative blew up in her face, like it did for many, shortly after the suspect was taken into custody. Much to the dismay of many a critical race theorist, after the suspect was apprehended, it was learned that he was, in fact, of Middle Eastern descent.

However, in light of this information, rather than apologizing for her racist assumptions, DiCaro doubled down, writing the next day, “For everyone asking me if I’m going to delete this tweet and apologize to white men, no, I am not, because it’s still true.“

When called out by another user for her astonishing commitment to narrative over facts, DiCaro further claimed that her statement “wasn’t stupid or wrong,” arguing that “white men do the vast majority of mass shootings in this country – it’s an easy google.”

With such a condescending attitude, one would assume that DiCaro would have verifiable information to back up her claims.

Yet, it’s clear that she is basing her assumption on hearsay and unsubstantiated statistics, (as evidenced by her citing of a Mother Jones ‘statistic’ which only bafflingly and outright falsely claims that only two mass shootings happened in 2020)  ‘googling’ for information on mass shootings returns only selective news stories from media outlets, rather than any hard numbers.

According to Mass-Shootings.info, which catalogues every solved and unsolved mass shooting event in the United States, of the 612 mass shootings that occurred in 2020, 118 were committed by Black individuals (73%), with 22 apiece for White and Latino individuals (14% each).

Of course, facts don’t matter to such outright ideologues. “My in-box and DMs are full of extremely upset white men who don’t give a damn about mass shootings but are demanding I issue a blanket apology to white men,” wrote DiCaro on March 23rd. “To which I say . . . NO.”

Julie DiCaro, not only have you proven that you’re a racist idiot dedicated more to the narrative than any sort of objective fact, but your temper tantrum in the face of being proven verifably wrong proves that your work as a journalist should never be trusted.

(P.S.: Have you checked your own skin color? If you truly adhere to your narrative, you’re going to be in for a rude awakening when critical race theory inevitably turns on you for being ‘the enemy’.)

In writing this, I also discovered the stupidest fact of all: DiCaro has now locked her Twitter. I suppose her extremely-true-and-fact-based-claims were just too truthful for the masses.

In Washington today, Democratic Senator Tammy Duckworth made quite a promise for President Joe Biden. In his picks for his cabinet members, Duckworth stated that she would stall his nominees for lack of Asian American representation.

As reported by the New York Post, Duckworth had some choice words for why she wanted to stall the process for the President. Representation? No. Pettiness.

“There’s no AAPI representation in the cabinet,” said Duckworth. “There’s not a single AAPI in a cabinet position. That’s unacceptable. President Biden will be the first president in 20 years without a cabinet secretary [who] is AAPI.” 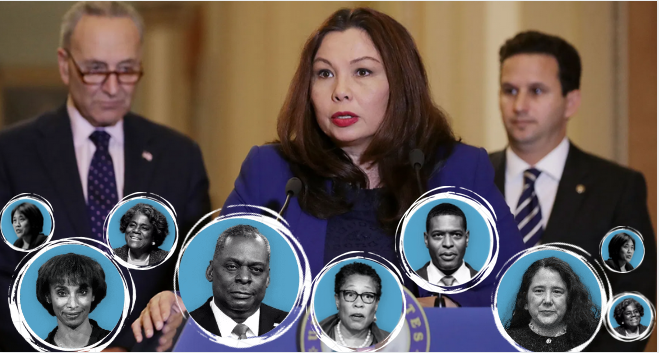 When asking the Chief of Staff about Asian representation, O’Malley simply stated that “Well, we’re very proud of Vice President Harris.” Because Kamala Harris is biracial, being part black, part Indian (Asian) and, by O’Malley’s implication, the VP fills that role for Biden’s cabinet by default.

She took issue with O’Malley’s reasoning. Duckworth stated, “And that’s not something you would say to the black caucus, ‘Well, you have Kamala, we’re not going to put any more African-Americans in the cabinet because you have Kamala.’” 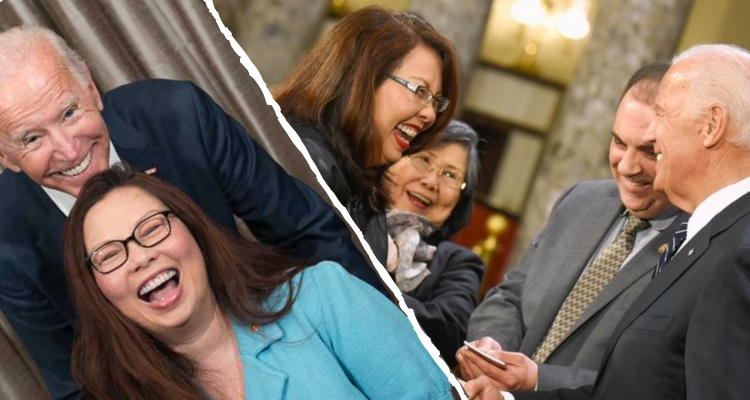 It’s important to note that Katherine Tai is nominated for the US Trade Rep. Duckworth seems to have forgotten her in her mental roster for the President’s picks.

Maybe she’s upset that only one person is AAPI while some of the nominees are black and even more are white. There is one Latina amongst the roster, Isabel Guzman, who will be Administrator of the Small Business Administration.

I’m not seeing any of the Latina/Latino senators threatening to hold up the confirmation process because of it. However, we’re still early in this whole debacle, so we might get some objections sooner rather than later. 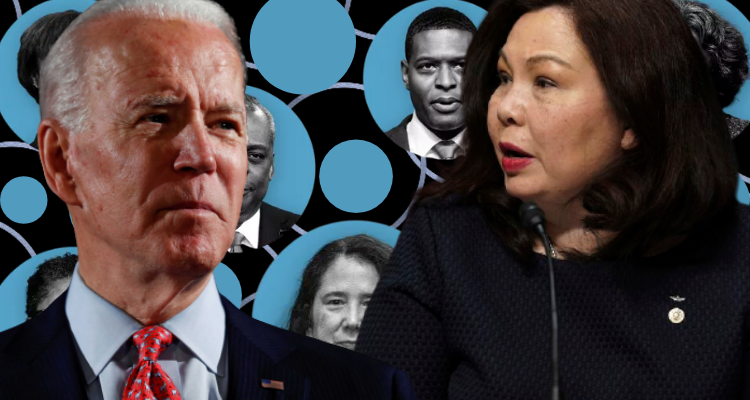 With that, we’d like to welcome Tammy Duckworth and the Democratic Party to the Daily Stupid. Instead of working together with your fellow Democrats to build a better republic, we’re only in March, just two months into Joe Biden’s Presidency, and you’re already working to tear each other apart for woke points.

Just goes to show you that the Republican party doesn’t really need to do anything- because eventually the members looking to score SJWcred will eat one another.

We look forward to your continuing and growing stupidity moving forward.