Due to COVID, WWE had huge Tyson Fury plans dropped. Also, NXT Tag Team Champion Danny Burch was hurt Wednesday and might have to vacate the title.

At one point in the match, Burch & Lorcan tried to suplex Kross. The move backfired and instead they were sent to the outside.

During the spot, something went wrong with the landing. Burch’s shoulder took the brunt of the bump and he is hurt.

He did not return to the match as the medical team evaluated him on the outside. The announce team also addressed the situation for those at home.

According to F4WOnline [6], Burch separated his shoulder. There is no word on if surgery is required or how much time he will miss.

With Takeover only weeks away, WWE will need to make a decision rather soon. There is a good possibility the titles will be stripped or Lorcan will need a new partner.

WWE will know more once the doctors get a better look at the severity of the injury. The 39 year old could be out of action for a week or over six months.

The injury seems to be exactly what happened to Kross when he won the NXT Championship. He was forced to relinquish the title only days after winning it [7].

Kross returned to action after a few months, but many thought he might would be gone for a year [8]. Now, Kross will look to regain the NXT Championship he never lost as he challenges Balor.

As for the NXT Tag Team Championships, there are a few options with Takeover being two nights. WWE could book a mini tournament leading into the shows or hold the entire thing during Takeover.

Simply put, this is bad timing for Burch. Hopefully, the injury will not keep him away for long and the belts stay put. 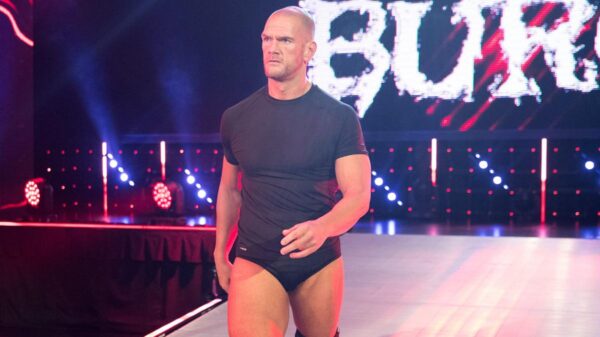 So far, fans have saw Tyson Fury compete once inside a WWE ring at Crown Jewel in Saudi Arabia. That saw the undefeated Heavyweight Boxing Champion score a count out win over Braun Strowman.

Despite only having one match, WWE had planned for Fury to work several big pay per views [9]. One of those matches would have been against Drew McIntyre, who has traded words with Fury [10].

And, apparently the bout would have taken place from England. But, COVID caused all those plans to be dropped.

“I was also supposed to fight Drew McIntyre in a PPV event in the UK, but none of that happened, thanks to COVID. So, COVID has cost me SummerSlam, [WrestleMania], PPV with Drew McIntyre, the [Deontay] Wilder rematch, and the [Anthony] Joshua fight.”

The last WWE pay per view from England was in 2003. Hopefully, once the world gets control of COVID, WWE will return to England.

Since becoming the first person to defeat Wilder, Fury’s popularity has dramatically increased. He might not be working any WWE matches for a bit since he just signed a two-fight deal against Joshua.