Could Chad Gable leave WWE soon? Some tweets on social media have fans and wrestling journalists raising an eyebrow (or two)!

Chad Gable is a talent [1] that comes to mind when talking about WWE superstars that aren’t given a real chance in the promotion.

With that said, some posts on Twitter recently have some wondering if this underrated athlete is heading out of the company soon.

AEW’s FTR hasn’t been quiet about wanting Gable to become #AllElite. Cash Wheeler, Dax Hardwood, and Gable used to be friends. It seems a recent social media exchange proves they are still as chummy as ever.

Gable is paired up with Otis right now on Friday Night SmackDown [2]. Otis wished Otis a “Happy Birthday” on Twitter this week. Meanwhile, Gable stated his partner was his “#1”. The tweets were funny, but got even more interesting.

Dax Harwood wasted no time in replying to this tweet, implying that Chad’s WWE deal might be up rather soon. Check out the posts, below.

HAPPY BIRTHDAY to The #AlphaAcademy [3]’s Own and Founder

It’s unclear if Chad Gable will end up re-signing with the WWE. It’s also unclear if he’ll head to another promotion or even AEW.

Social media and the internet make it hard for any superstar to bury anything these days. Nothing like the old days of wrestling.

Still, secrets have a way of coming out, sooner or later. Vice’s most recent Dark Side of the Ring documentary recently exposed an unknown marriage of a WWE legend that no one knew about.

The first episode of the newest “Dark Side of the Ring” series exposed quite a major untold story. 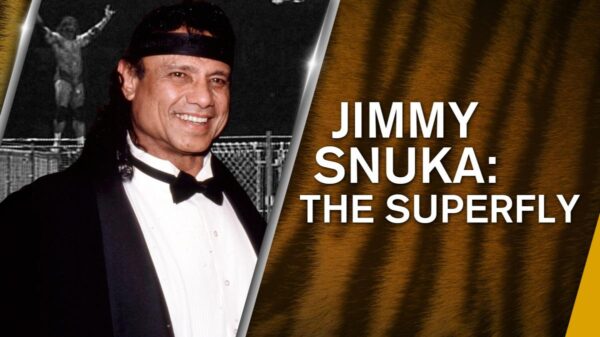 While it’s been hidden for a long while, WWE [10] Hall of Famer Jimmy “Superfly” Snuka was once married to Patrice Aguirre, Gino Hernandez’s mom, for about a decade.

According to Patrice, her father was also married to Snuka’s mom.

Aguirre stated that [11] she would talk to Snuka’s mom on the phone while she and Jimmy were on dates together. When Superfly headed to Japan for a wrestling tour, Patrice convinced his mother to come to see her in Houston.

Snuka’s mom was with Patrice during a time when her father was also visiting her. The three went out that first night together, and Snuka’s mom and Aguirre’s dad hit it off.

After they danced, the ladies headed to the bathroom, where Superfly’s mom told Patrice that her dad had asked to marry her.

According to Aguirre, the two got married! During the documentary, she also relayed that she and Jimmy were married for ten years. She also noted that she “just recently” found out that Snuka had passed on.

Patrice went on to say that despite what has been said about Snuka [12], not to mention the murder accusations, Jimmy was always so kind, and one of the “sweetest” people around.

She stated that his mother was very kind too. Aguirre said that as they were all married, for a moment in time, they were just “one big happy family”.

Dark Side of the Ring: Confidential is on ViceTV, airing every Tuesday at 9 pm E.T.