AEW has spoken to Batista, leading some to wonder if he will join the promotion. And, WWE actually thought about burning the American flag.

There are reports that AEW and Batista have spoke about working together. Also, WWE looked into burning the American flag as part of angle.

After tonight, AEW will have their Revolution pay per view in the rearview mirror. There are plenty of big matches, but that is not why people are talking.

Tony Khan has promised a huge name will be present. And, he or she will sign their multi year AEW contract.

Outside of that, little is known about the mystery person. The name is apparently “hall of fame worthy” and one of Khan’s favorite wrestlers.

Since the tease, fans are buzzing about who might be coming in. AEW’s last surprise was Sting, which shocked virtually everyone when he debuted on an episode of Dynamite.

Hopefully, the promotion continues to deliver on big promises.

CM Punk has stated he is not the person and Kurt Angle has been dropping lots of hints. Since Angle is in the WWE Hall of Fame, it might not be him.

Although, we did hear about an interesting name that fits the description given. For that information, please click here.

During the Wrestling Observer Radio, Dave Meltzer brought up Batista. He does not believe that he will appear tonight, but apparently the two sides have spoke.

“I don’t think that it’s Dave Batista,” said Meltzer. “But, I do know they’ve discussed it.”

Batista And His Past With WWE 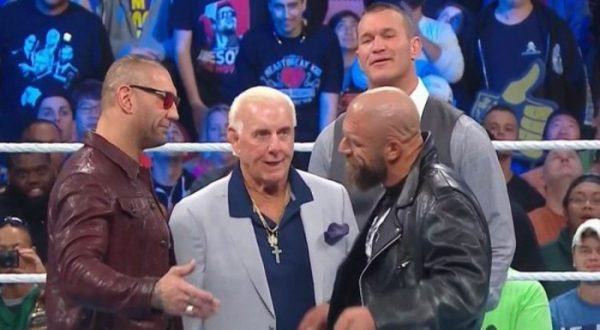 Now, Batista could work because is not part of the WWE Hall of Fame. He was supposed to be inducted last year, but COVID caused everything to pause.

Typically, WWE holds the ceremony within a few days of WrestleMania. As of now, there has been no mention by WWE if they will do anything in April.

Batista and WWE have what some could call a complicated relationship. It was WWE that elevated him into the main event.

He would leave the company a few times, with one time having to do with creative. Basically, Batista quit because he was not happy.

But, like many others, Batista got the itch to act. So far, he has been successful.

Batista is not making money like The Rock, although he does well.

As for wrestling, Batista officially retired after losing to Triple H at WrestleMania 35. Yet in wrestling, never say never.

One Last Time for The Animal pic.twitter.com/FChy9EOd84

Whomever AEW has signed, fans will learn their identity tonight. Would Batista be considered a flop if he does appear? 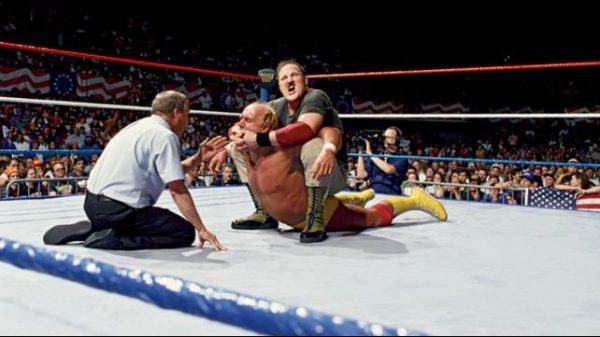 At one point, WWE looked at having the American flag burned on TV. Thankfully, the idea did not happen as those behind the scenes came to their sense.

On a recent episode of the Something to Wrestle with Bruce Prichard Podcast, Bruce Prichard went over the idea. During the early 1990s, Sgt. Slaughter was the top heel as the WWE Champion played an Iraqi sympathizer.

“There was a lot of discussion about doing it because it was legal and it was Jesse Ventura who came to us with the idea,” said Prichard. “It had made the news of people burning the flag in protest.”

“This is something that Slaughter could do to get heat. Obviously, better judgment prevailed and it was decided not the kind of heat we want regardless of whether it’s legal or not, regardless whether it’s accepted.”

“The one time we considered doing it was at the Royal Rumble.”

Prichard also denied that they wanted to run the spot during The Main Event V on NBC. The network likely did not want that, but pay per view is different.

SmackDown In A Nutshell: Will We Have A Wild Night In Winnipeg?