Rhea Ripley is on the cusp of entering the main roster, and a recent social media post has some questioning if she’ll debut a new look. Also, will fans see an NXT match at WrestleMania 37?

Rhea Ripley [1] has a unique persona on NXT right now, one unlike any other female on all three rosters. As she inches closer to a main roster debut, could she be changing her look?

WWE main roster fans are very different from those viewers who watch NXT. On Wednesday, February 10th, Ripley shared a post on her Instagram account. She was sporting a new hairstyle and a different look. See photo below:

It’s important to note that the IG picture looks like an official company photoshoot. Rhea’s caption under the photo states, “I’m an odd combination of “Really Sweet” and “Don’t Mess With
Me!” – @johnnyphotowwe.”

Ripley generally comes out to the ring in black gear with spikes, and her hair slicked back. This new “look” could be just for fun, and she may debut looking the very same as she usually does.

There’s also a chance her gimmick might change slightly, so only time will tell.

PWInsider [3] recently reported that WWE officials have yet to decide where to place Ripley on the main roster. Her performance in the 2021 Women’s Royal Rumble [4] was considered her official “call-up” from NXT.

Whether she hits Monday Night RAW or Friday Night SmackDown, Ripley is sure to make a tremendous impact in either women’s division.

Ahead of NXT TakeOver: Vengeance Day taking place this Sunday, Triple H conducted his customary conference call with some media. One question that popped up was about WM 37.

Hunter was asked if there would be any NXT matches on the WM 37 card this year. 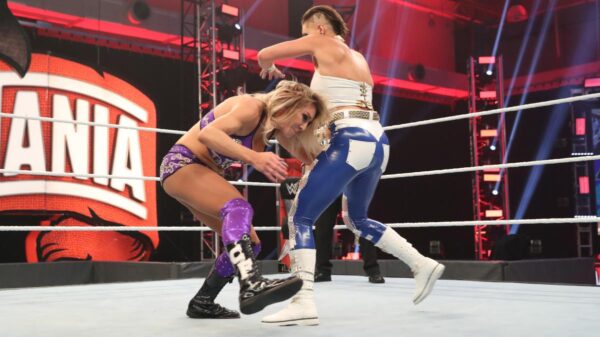 HHH answered the question by stating that it’s a balancing act to do so, and factors need to be taken into consideration.

Hunter also noted that he would love NXT to have a match on the Grandest Stage of Them All [5] This year. With that said, he did not confirm whether or not this would happen for sure.

There is a possibility that WWE could have an NXT TakeOver during the week leading up to WM 37, which could affect this decision. He went on to state:

“… it’s just a matter of how much you can fit into WM that weekend, and you know, is the benefit of it having its wone platform of an NXT TakeOver that week? It’s a balance, but I love it if we can do it.”

As the WM 37 card forms, it’ll be interesting to see if an NXT match [6] (or two) will be inserted. With a number of variables in the air at this point, anything is possible.