Good news for fans of the 619, Rey Mysterio recently confirmed he’s re-signed with the WWE. Meanwhile, a spoiler alert for AEW Dynamite! KENTA unexpectedly invaded the show this week, shockingly unveiling a new partnership between NJPW and AEW.

During a recent Sports Illustrated [1] interview with Justin Barrasso, Rey Mysterio confirmed that he’s signed a new contract [2] with the WWE. The depth of this new agreement was not revealed.

It’s clear that the 46-year-old wrestling legend is not quite ready to walk away from the squared circle just yet, as noted by Mysterio, below:

“We never made the signing of my new deal public, but there is going to be more time to see Rey Mysterio in WWE. I’m going to keep wrestling, at least until Father Time catches up and says, ‘It’s time to go.’”

Currently, Rey-Rey is working alongside his son Dominik on Friday Night SmackDown. During the interview, Mysterio stated that it means a lot to him to work with his son in the WWE.

He noted that the company sees a bright future and potential in Dominik.

“I am so happy to see my son Dominik doing so well, and it means so much to me to be with him in WWE,” Mysterio noted. “When I left WWE [in 2015], I was tired, I was beat and I was going through a phase in my life where I just needed some time off. That time away recharged my batteries.

What Factored His Decision?

Reports circulated in [11] the fall of 2020 that Rey was offered a new three-year agreement by the WWE. Before that, he was under an 18-month contract, and reportedly working without a contract after his 2018 return.

It was also noted that AEW was looking to match the financial offer Rey had received from the WWE [12]; however, having Dominik on the main roster might have added to Mysterio’s decision to stay with the WWE.

Speaking of AEW, they have solidified is an interesting working relationship with another major wrestling promotion.

The moment was quite shocking and revealed to the world that the AEW and NJPW promotions officially have a working relationship together. 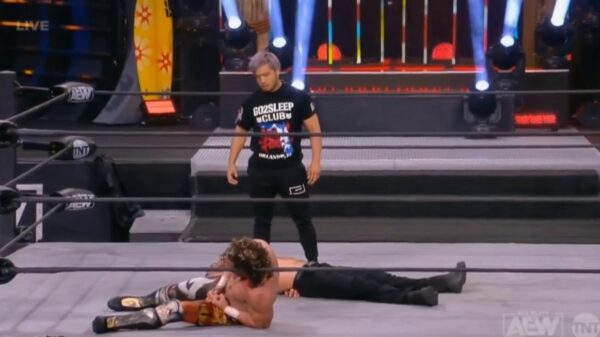 Wrestling Observer Radio’s [14]Dave Meltzer recently chimed in on the agreement, stating it had taken quite the work to come together.

While the “deal is done”, the pandemic did affect the back-and-forth in some ways.

Dave also relayed that the only way to get Jon Moxley was to come to an agreement. When AEW first entered [15] the pro wrestling spectrum, NJPW didn’t realize the success they would have.

Watch the moment he attacked Jon Moxley at AEW Dynamite!https://t.co/oYEj0vqSCV [16]

According to the report, New Japan believed AEW was a “fly by nighters”, who had “big leagued them”, but they were clearly incorrect.

As it stands now, the two promotions have a deal; however, only time will tell how far they will go when it comes to “working together”.