Sting wrestling for AEW will not be a one time deal & he will very physical. Also, why did the Big Show leave WWE after over two decades?

Sting has recently been “cleared” for the AEW Revolution pay-per-view (PPV). There had been concern over a powerbomb he took during the February 17th edition of Dynamite.

Also, why did the Big Show leave the WWE?

More On Sting Wrestling For AEW

There was worry over the legend’s health after taking a powerbomb from Brian Cage on the February 17th edition of AEW Dynamite.

As most know, Sting had to retire from wrestling after a neck injury in 2015 during a match at WWE’s Night of Champions when he faced Seth Rollins.

Khan stated that Sting has been medically cleared for in-ring action, and has been training with Darby Allin, TNT Champion.

He als noted Sting has been using powerbomb training with sparring partners to ensure he’s ready for his return match. Khan confirmed he was the one who made the call about Sting taking the powerbomb last week.

Khan revealed that Sting would be returning to AEW last night, looking for revenge on last week’s powerbomb, which is exactly what ended up unfolding.

Sting and Allin confronted Starks and Cage. The Stinger was able to nail Cage with a Stinger Splash and Scorpion Deathdrop.

At the age of 62, Sting will return to the ring for his first official match in close to six years. This all takes place at the AEW Revolution PPV on Sunday, March 7th. Sting and Allin will face Ricky Starks and Cage in a Street Fight bout.

Speaking of  WWE legends that have hopped to the AEW roster! Paul Wight, also known to most fans as The Big Show, shocked the wrestling world yesterday when an announcement confirmed he was now #AllElite.

Why did Wight leave the WWE? More on that, below.

As reported by WNZ yesterday, Paul Wight (a.k.a The Big Show) has signed a long-term contract with AEW. According to a report from Fightful, many within the WWE didn’t know he was leaving. 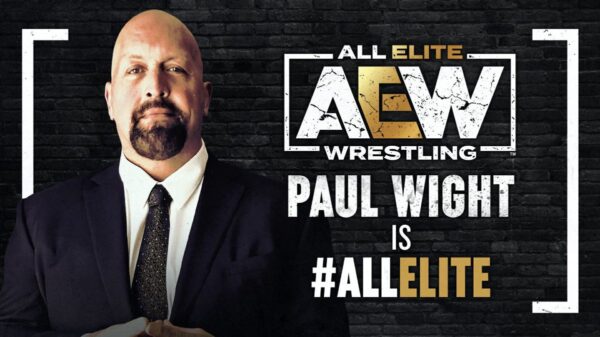 Still, a handful of WWE officials are claiming that they were “in the know” about him exiting the company, but were keeping quiet.

With that said, very few people knew Wight was signing with AEW and the news did come as a shock. Therefore, AEW’s backstage is very excited about having Paul, as he is very well-liked and has a ton of wrestling knowledge to share.

What’s With The Move?

There are a few reasons for Wight’s AEW signing. He had some recent life changes like selling his home and this WWE contract expiring.

Plus, Netflix’s The Big Show Show was canceled last August. WWE Studios had co-produced the series.

Last month, the WWE and Big Show were trying to renegotiate his contract. Sadly, both sides simply could not come to an agreement. One point big point was the financial terms.

Lastly, Wight was very open with the WWE around his unhappiness when it came to his segment on the January 4th edition of Monday Night RAW.

For those that can remember, it was “Legends Night” and Rand Orton was on a spree of mocking former opponents. He berated The Big Show for being “retired”.

Basically, WWE quietly moved The Big Show to the alumni section on WWE.com this past February 19th. They also did not publicly announce Wight’s departure from the company, or offer any “well wishes”.