Who will Bianca Blair meet at WrestleMania 37? The 2021 Women’s Royal Rumble [1] winner certainly has some options with RAW, SmackDown and NXT available.

Plus, AEW edited a match thanks to some Good Brothers humor that went too far for their product, Apparently, the edits made were substantial and the most the promotion has ever made.

The WWE Universe is still reeling from the 2021 Royal Rumble pay-per-view (PPV). All the matches were quite entertaining and solid. Plus, one of the highlights was fan favorite Bianca Blair emerging as the winner of the women’s Royal Rumble match.

According to reports [2], the winner of the men’s Royal Rumble, Edge, is set to challenge Universal Champion Roman Reigns soon [3]. This is great news and should make for some incredible promos and build-up along the Road to WrestleMania.

So, who will Bianca Blair go toe-to-toe with?

Dave Meltzer from Wrestling Observer Radio [2] recently stated the WWE powers that be are still up in the air when it comes to Bianca’s WrestleMania 37 opponent.

At the end of the day, she could face Asuka, Sasha Banks, or NXT Women’s Champ, lo Shirai. Although does the WWE want to re-do the same storyline as Charlotte Flair’s swerve last year?

With the event over two months away, there’s still some time to decide. Still, due to marketing needs, they may need to make up their minds within the next couple of weeks.

During a WWE YouTube interview, Blair stated that she’s deciding things “one step at a time” when asked about whether her opponent would be SmackDown Women’s Champion Sasha Banks or RAW Women’s Champion, Asuka.

Over at AEW, their Dynamite show currently airs on TNT. This means the company has to make sure fans are entertained, and network executives are happy with the content aired.

According to a report by Dave Meltzer [2] on Wrestling Observer Radio, AEW [6] made some major edits on last week’s Dynamite show.

The edits were made during The Good Brothers match. It pitted Gallows, Anderson, and the Young Bucks versus the Dark Order. Meltzer noted it was the most-edited bout in AEW’s history. 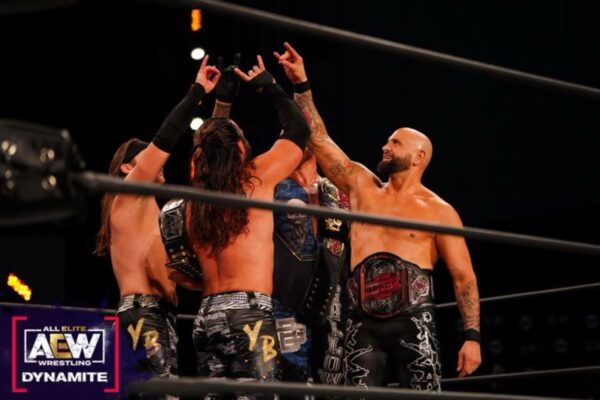 What was the reason for all the cuts? As per the report, Anderson and Gallows kept making marijuana references and other inappropriate gestures.

The Good Brothers are known to have this kind of humor, which some fans enjoy. Sadly, many network executives don’t exactly approve of some of these “jokes”, thus, edits were made.

Apparently, AEW [7] also edited marijuana references when Inner Circle was in Las Vegas. No word on what was cut out, but it was clearly too over-the-top for television, and got axed.

At least the live audience got to enjoy Gallows and Anderson’s unique sense of humor. With that said, many young kids are into the brand and it can be a slippery slope.

In recent years, the WWE has had to manage entertaining their older fans, while also keeping things “clean” for the younger generation, as well.

Basically, AEW has drawn the line on what is appropriate for TV.