The 5 Indie Comics weekly column is back.

In our third weekly column, Bounding Into Comics recommended The Imperium and Biblical, Charlie’s London: From East Lane to the Limelight, Black Flag: Pineapple Perception, Gorgon Vol. 1, and Tesla on Mars.

Related: 5 Indie Comics That Look Worth Your Money [1]

The purpose of this column is to shine a light on some independent projects that look top notch all around from the story to the art.

The books are not ranked in any particular order, but are simply a list of five independent books that are currently available to purchase now or are being crowdfunded on various platforms. 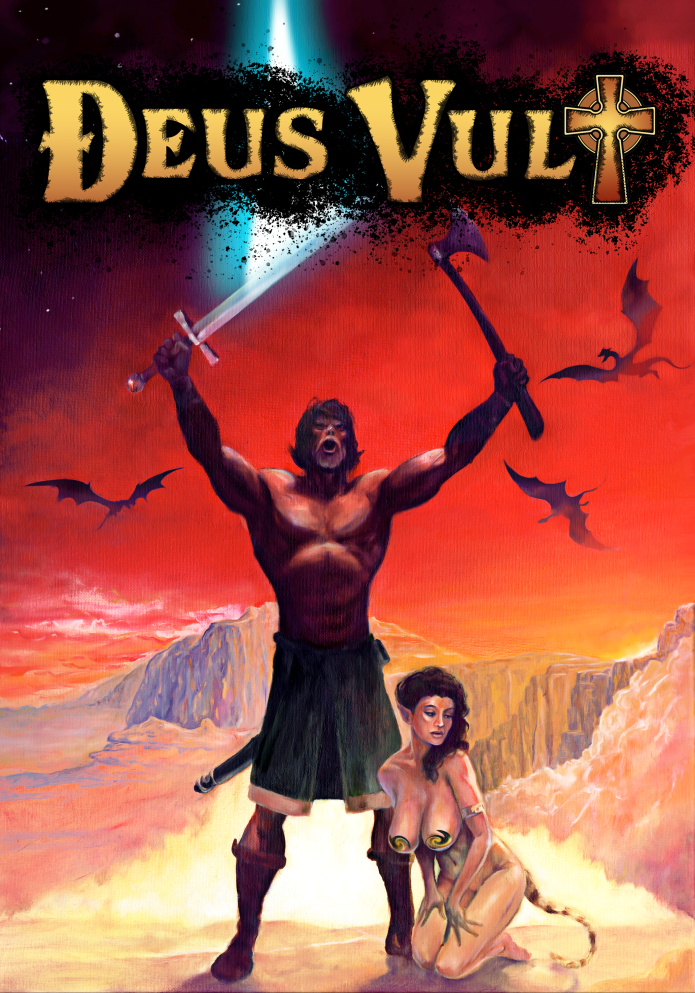 The official description begins, “A crusade into another realm leads to the deadliest of evils. Sir Domingo, Spanish Knight and Holy Crusader, is blessed with a vision on his return from his triumphant conquest in the Holy Land. The Holy Grail appears in the sky, leading him on an adventure to another realm where demons and monstrosities lay waste to all of creation.”

It continues, “He discovers a strange race of people called the Kityin, who seem more kin to Earth’s cats than they do humanity. He alone can lead them to salvation and away from the tyrannical rule of The Demon King.”

The description concludes, “Should he fail, not only the Kityin but all the people of all the realms will be destroyed!” 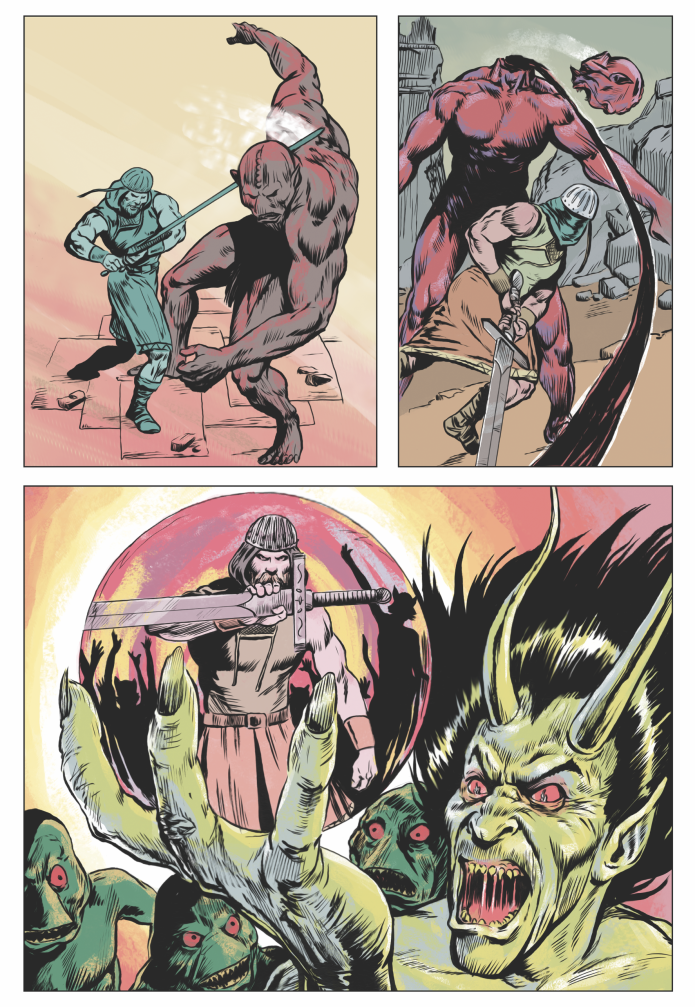 Del Arroz describes the book as “a 66-page crusader fantasy graphic novel which will bring back memories of great comics like CONAN THE BARBARIAN and THE MIGHTY THOR.”

The book will feature a variant cover by Miss Sashi.

It is currently available to back on IndieGoGo [2]. The digital version is listed at $12 while a physical version is $25. There’s also the option for a hardcover at $50. 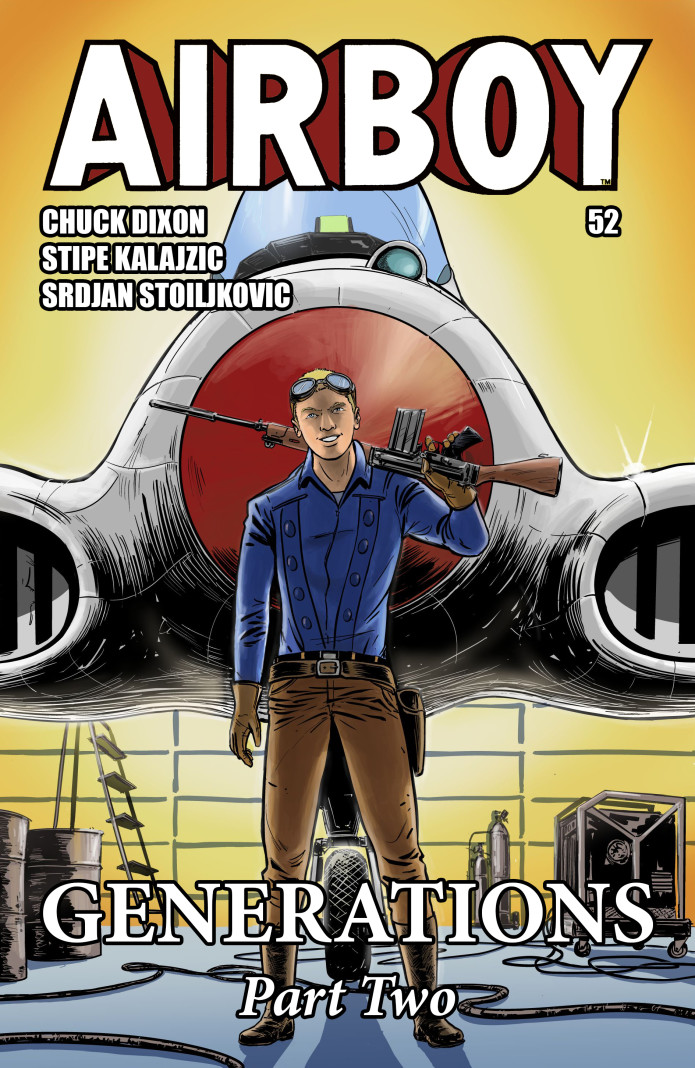 Airboy is written by Chuck Dixon and is being published by It’s Alive! It features artwork by Brent McKee, Jok, Stipe Kalajžić and Srdjan Stoiljkovic.

The official description begins, “Airboy is a fictional aviation hero from an American comic book series initially published by Hillman Periodicals during a time best known to fans as the Golden Age of comic books. he was created by writers Charles Biro and Dick Wood and artist Al Camy.”

“The character Disappeared from publications until a 1980’s revival under Chuck Dixon that lasted for several years. That new incarnation, published by Eclipse Comics, updated Airboy to the modern era, starring the son of the original character.” it continues.

The description concludes, “The 50-issue run, reintroduced many of the supporting characters from the 1940’s series, such as Valkyrie and a Japanese fighter pilot named Hirota, and guest-starred many of the character who had appeared as backups in the original comics. Chuck Dixon scripted with the occasional editorial assistance of Tim Truman. Dixon now returns to continue the story he began 30 years ago!” 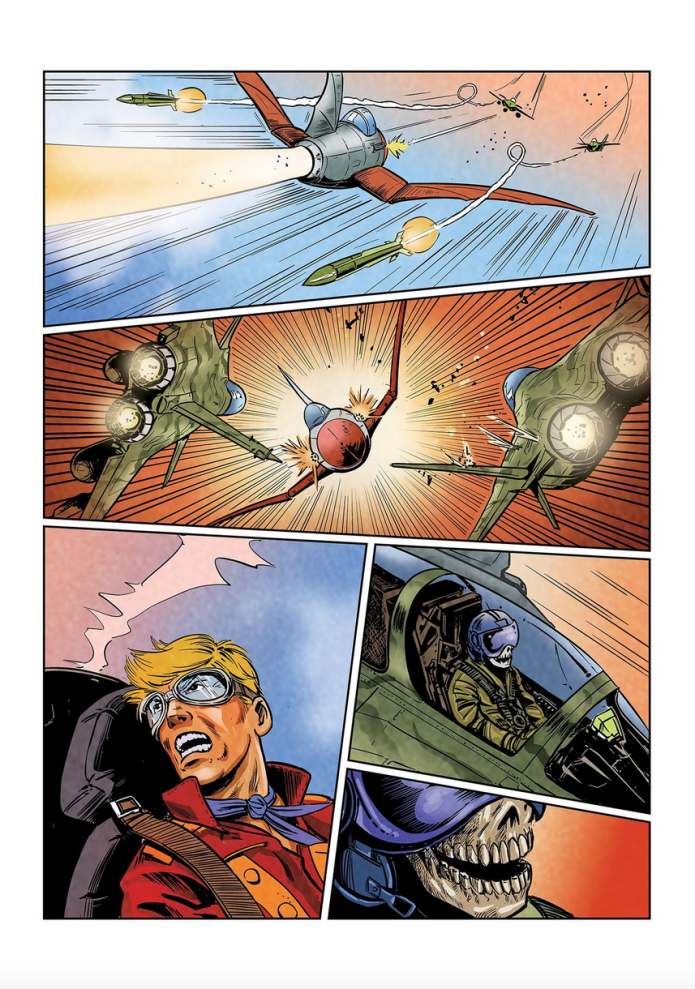 It’s Alive adds, “The first four issues of AIRBOY will deliver Dixon’s new story entitled “Generations”, where David (Davy) Nelson IV, grandson of the original Golden Age AIRBOY, and son of the more recent 1980’s incarnation of AIRBOY created by Chuck Dixon, is introduced as the new AIRBOY.  Dixon has returned to this world and these characters with one hell of a story that is sure to blow your mind!”

There are multiple variant covers available for both Airboy #51 and Airboy #52. For Airboy #51 there are variants by Jim Steranko, Dalibor Talajic, Matt Kindt, Paul Gulacy, Sam Keith, and Bret Blevins. 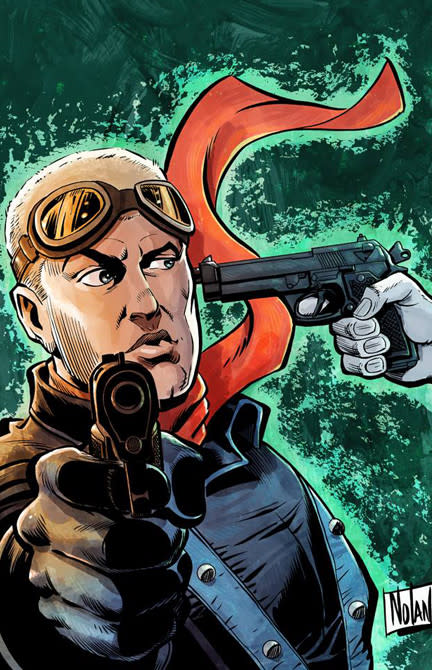 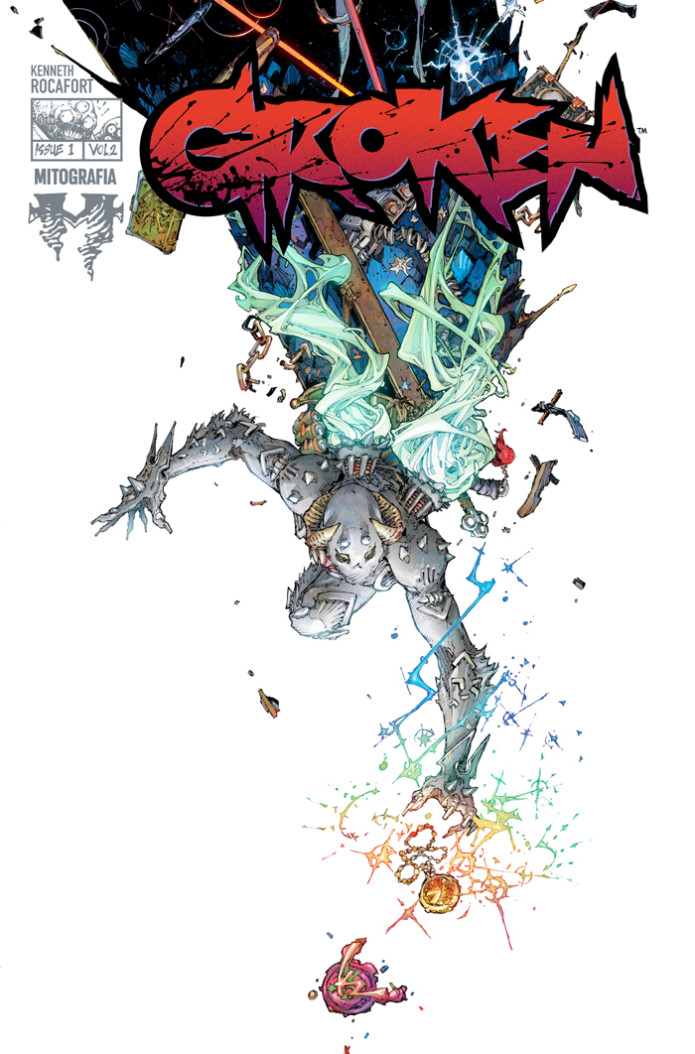 Groken is written and drawn by Kenneth Rocafort.

The official description begins, “Within this graphic novel conspiracies are explored through the travels of this peculiar character named GROKEN.”

It continues, “This Odyssey is set in a rotten era where myths were sadly forgotten and science corrupted the hopes of a good tomorrow. “

“A singular theory makes the regiment shudder and the system now fears that the secret will be revealed and that the right to the crown will be claimed by the myth, a creature that bears the name of GROKEN,” the description concludes. 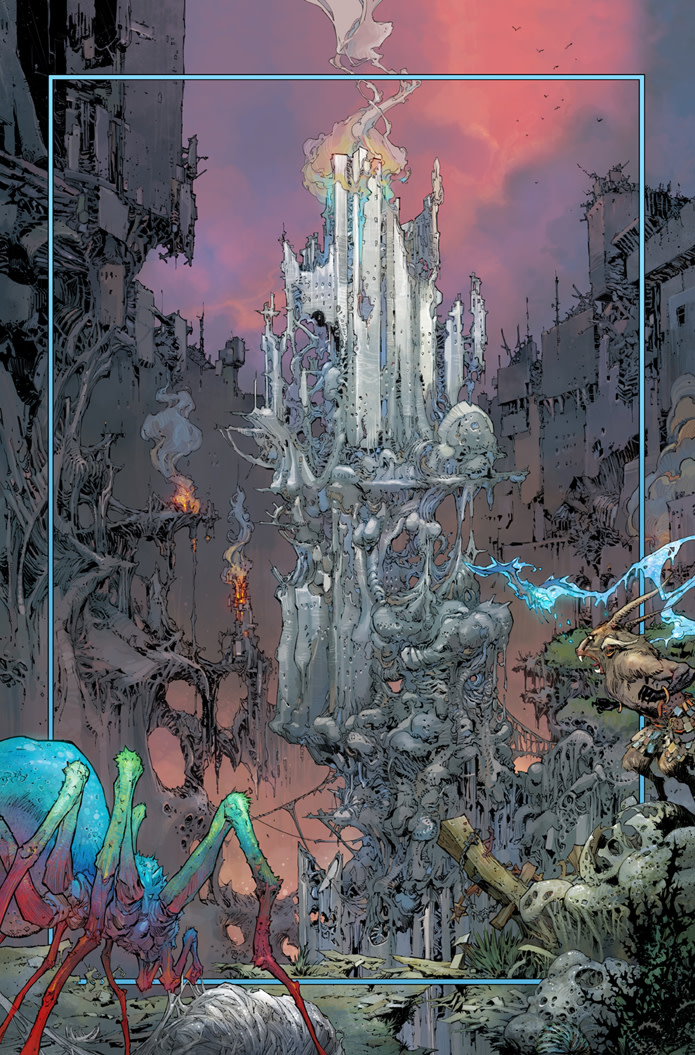 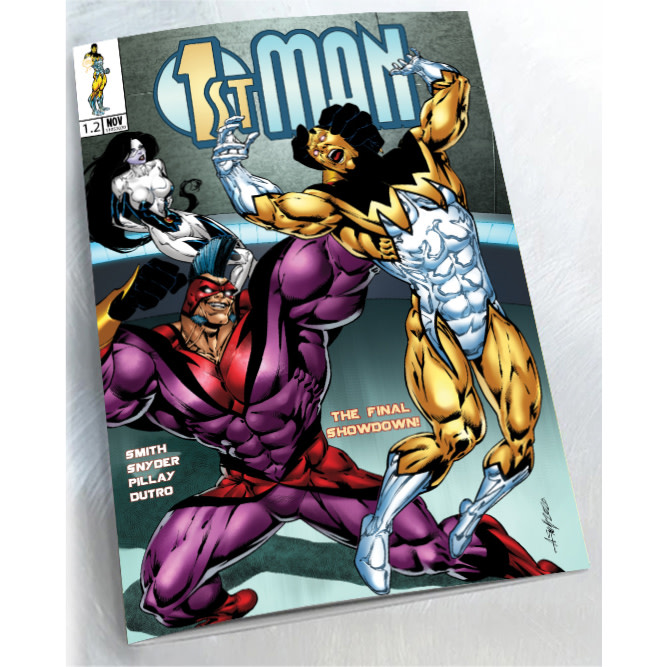 1stMan is written and drawn by Andy Smith.

The official description begins, “1stMan is the story of Luke Henry a freshman in college that is chosen to carry on the last Essence of the 10. There are 10 powerful Essences scattered across the universe, each inhabiting a being on different planets. If the being dies, the Essence will search out another worthy vessel.

It continues, ” If somehow, all 10 essences were collected into one single being, that being would become the most powerful force in the Universe, a virtually unstoppable force.” Once Luke gains that power, he can change into Apollo, the 1stMan!” 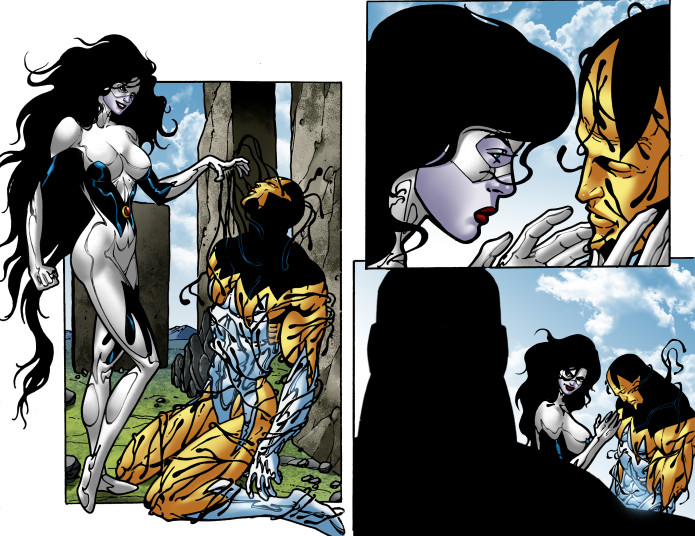 It then reads, “Monarch, the larger-than-life, power-hungry villain of this story, has collected 9 of the essences of the 10 by destroying the worlds they inhabited. He now has his sights set on the last one. Monarch travels to the world inhabited by the 10th essence, only to see it escape his grasp and find a worthy being to protect it and contain its power: 1stMan!

“But 1stMan isn’t the only character in this tale. Penumbra is the last survivor of one of the worlds destroyed by Monarch. She’s a femme fatale, not an ally of 1stMan so much as she is concerned with self-preservation. Her main goal is to stop Monarch from gaining the 10th Essence. Once he wields the power of the Ten, Monarch will be unstoppable,” the description concludes. 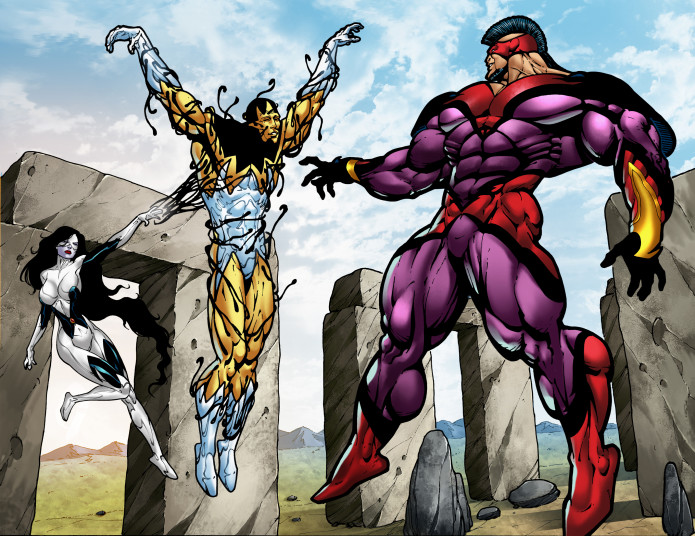 1stMan is a 64-page full color, perfect bound, graphic novel. It is currently available to back on IndieGoGo [5].

Along with the graphic novel, there is a 40-page program book that contains pin-ups of 1stMan by Adam Hughes, Alan Davis, Bart Sears, J. Scott Campbell, and more. It will also contain unused layouts for 1stMan, model sheets, sketches, and more.

The graphic novel will run you $25 while the program book is $15. 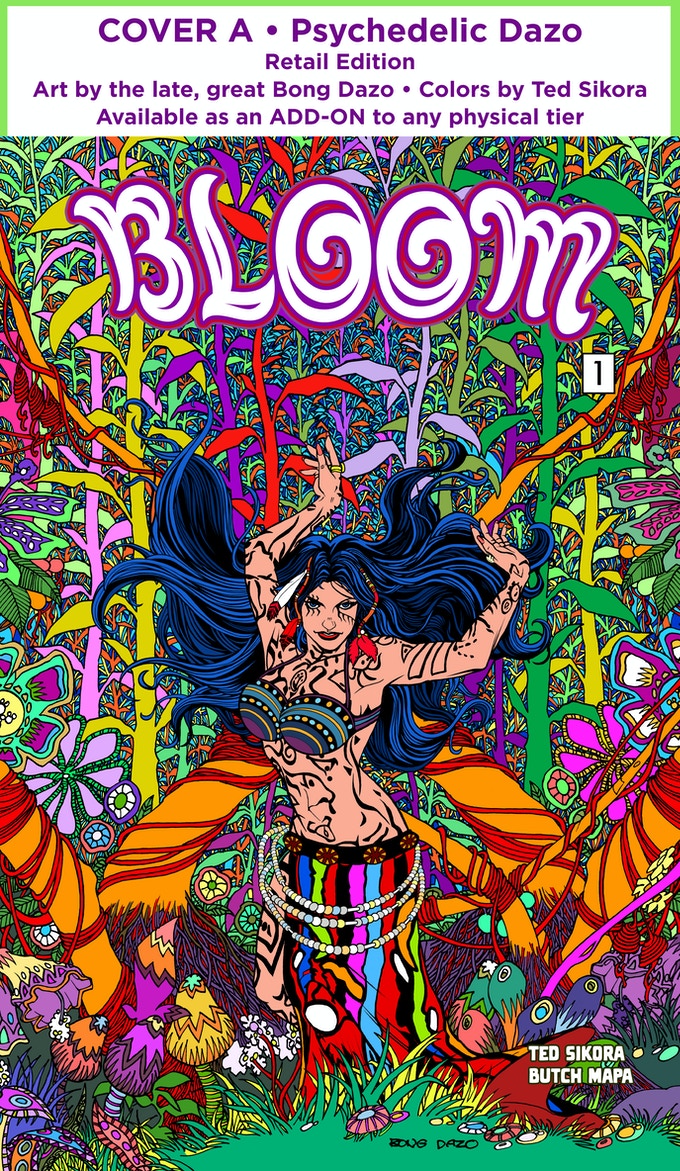 Bloom is written and created by Ted Sikora with art and illustrations by Butch Mapa.

The official description states, ” The year is 1969. Ramsey is an aspiring comic book artist who is trying to find inspiration for his femme fatale. When he meets wild dancer, Regina, at a street fair he invites her into the woods for a character photoshoot where she begins to break on through to the other side.” 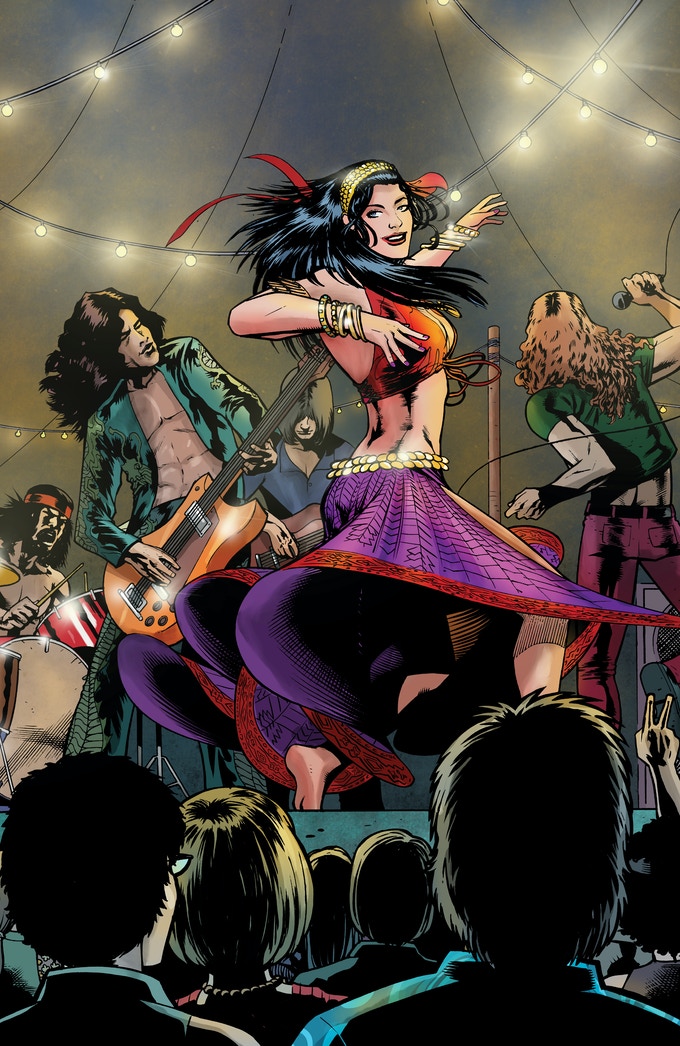 Bloom is currently available to back on Kickstarter. A digital edition will run you $5. A print edition is $12.

What books are you backing? What have you been reading that’s good?