During today's UFC card, Dana White's going to confirm whether Khabib's remaining retired, and how he phrased that news is very interesting.

It remains to be seen whether Khabib Nurmagomedov is going to remain retired, after meeting with Dana White on Friday. Well, not only is White going to announce Khabib’s decision during the UFC Fight Island 7 broadcast today, the way he reported that news is interesting, to say the least. 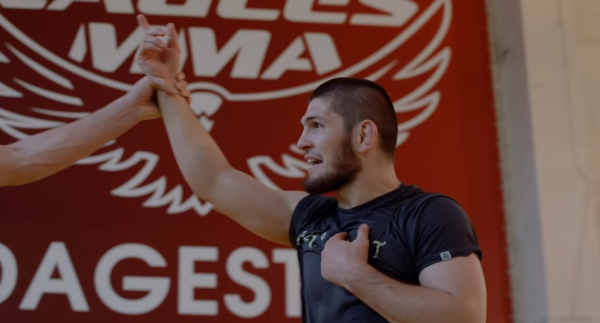 Even if you’re a casual fan, you likely know that after Khabib choked out Justin Gaethje in October, he announced he’s hanging up the gloves. The undefeated, lightweight champ said that after his father passed away earlier in 2020, he promised his mother he’d fight only more time.

Since then, however, White has said he thinks he might be able to convince Khabib to return and pursue the 30-0 mark. Nurmagomedov has repeatedly said he’s remaining retired, but he agreed to meet with White on Friday to discuss his future.

“I met with Khabib Nurmagomedov last night, and today at three o’clock on the east coast, on ABC the network, I’m going to talk about his decision, and how it’s going to impact the Poirier-McGregor fight next weekend, and the co-main event in the lightweight division.”

So, first off, you have to credit White here for some crafty promoting and driving more views to the UFC Fight Island 7 broadcast.

That aside, obviously White’s comments here about how Khabib’s decisio will “impact” the January 23 bout between Conor McGregor and Dustin Poirier, is really intriguing. White had repeatedly said that the fight would not be for a title, not even for an interim one.

So, the fact White has alluded to Khabib’s decision impacting that bout, could indicate that Nurmagomedov has insisted he’s not returning. As a result, maybe a belt is being put on the line at UFC 257 after all?

It’s also possible that no titles are being put up grabs, and that White’s going to formally announce that the winner of Poirier – McGregor is going to face the winner of Michael Chandler – Dan Hooker for the belt.

Finally, nothing White said necessarily rules out that Khabib hasn’t decided to fight one more time. Recently White told UFC Arabia that if Khabib opted to fight Georges St-Pierre, he would likely need to vacate the title.

That would open the door to a catch-weight fight, which is what GSP’s been calling for. So, could it be that Khabib’s agreed to vacate the belt, as a means to facilitate the GSP fight?

Update: during the UFC on Fight Island 7 broadcast, White reported Khabib will watch UFC 257 and Charles Oliveira’s next fight, to see if they do something to warrant his return (quote via MMA Junkie).

“His words to me were, ‘I’m gonna watch this fight.’ White said, ‘I would never tie up the division, hold the belt, and keep the belt away from anybody else.

“So I have the feeling if somebody delivers, it could be on the co-main event or the main event, and he thought Oliveira looked good (vs. Tony Ferguson).

… If these guys can do something special, Khabib will fight them.”