After Michael Chandler [1] took out Dan Hooker in memorable fashion at UFC 257, he cut an amped-up promo that honored Rick Flair. Well, since then, the pro-wrestling legend reached out to the former Bellator champ via a Zoom call. 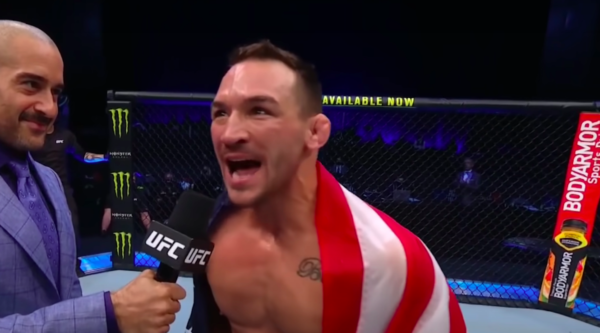 Recently Chandler posted the comments and video below, which shows him talking with Flair, following his big win at UFC 257 [2].

Just got a personal zoom call from @ricflairnatureboy to congratulate me on my win at #ufc257
–
Living an actual dream.
–
Thank y’all for being on this journey with me.
–
Stay the course. Eventually all your hard work will pay off, you just still have to be standing there with arms wide open when it does.
–
WOOOOOOOOOO!
–
See you at the top!
–
Huge thanks to @theathleteassist for making the connection for me.

What’s next for Chandler?

Promos aside, now it remains to be seen what’s next for Chandler. Following his win at UFC 257, Chandler has moved into the #4 spot of the UFC’s lightweight rankings.

There’s been talk that Chandler could be tapped to fight Dustin Poirier for the vacant belt. But, the latter has made it clear he doesn’t think Chandler deserves a title shot yet. [4]