Penn’s tweet appears to be in response to a leaked phone call between President Donald Trump and the Georgia Secretary of State Brad Raffensperger.

In the phone call President Trump states, “The people of Georgia are angry, the people in the country are angry. And there’s nothing wrong with saying, you know, that you’ve recalculated.”

In response to this phone call, Sean Penn took to Twitter where he wrote, “Mr. President. How about this ‘recalculation:’ Have you considered cyanide salts from an ampoule?”

He then added, “May well be a road worth your exploration. A mercy for man & country that would make your ‘boys’ proud.” 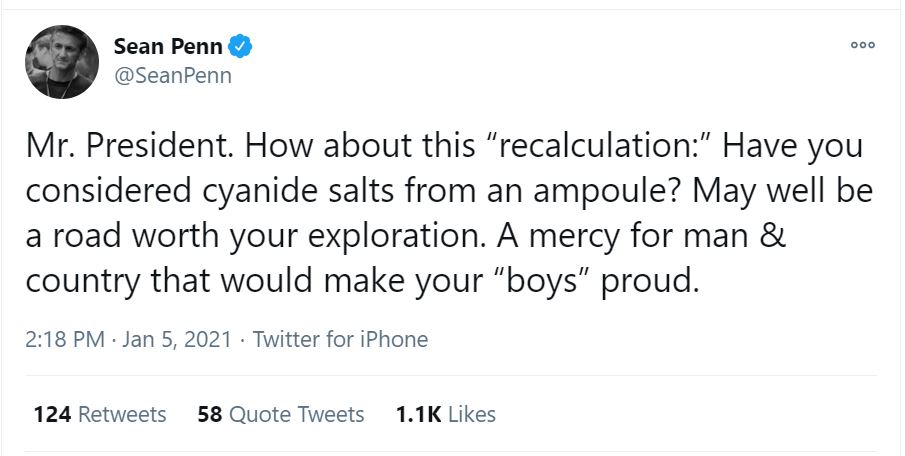 Interestingly enough, Sean Penn admitted back in 2019 in an appearance alongside Nick Offerman at the Los Angeles club Largo to promote his new book Bob Honey Sings Jimmy Crack Corn that he was thinking of killing himself leading up to the 2016 election.

According to The Hollywood Reporter, Penn told Offerman, “As it turns out, leading up to the election of 2016, I was going to f***ing kill myself if I didn’t find a way out of just focusing on what the hell was happening.”

“So I decided to take everything I thought and felt and exaggerated it and exaggerated the language in ways that would keep me giggling through one of the ugliest periods of conscious participation the country has ever had,” Penn continued. 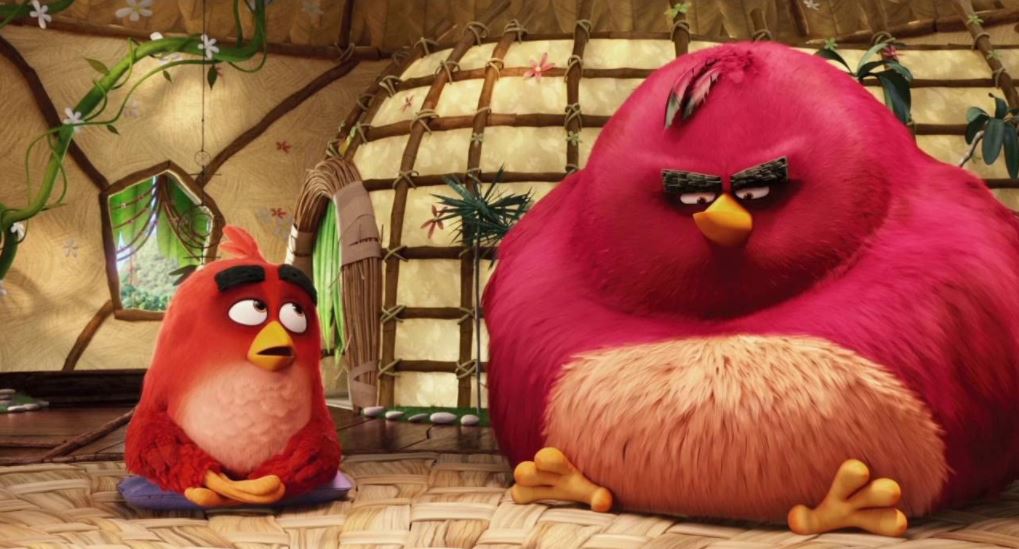 The actor then went on to detail that he has a model of President Donald Trump hanging from a noose on his fireplace.

Penn explained he received inspiration for the book from his den which “has a fireplace in it, and might or might not have a model representing our current president hanging from a noose.”

He added, “And it may or may not have a button on that model where can you press it and hear quotations in his voice. And that’s where I write.” 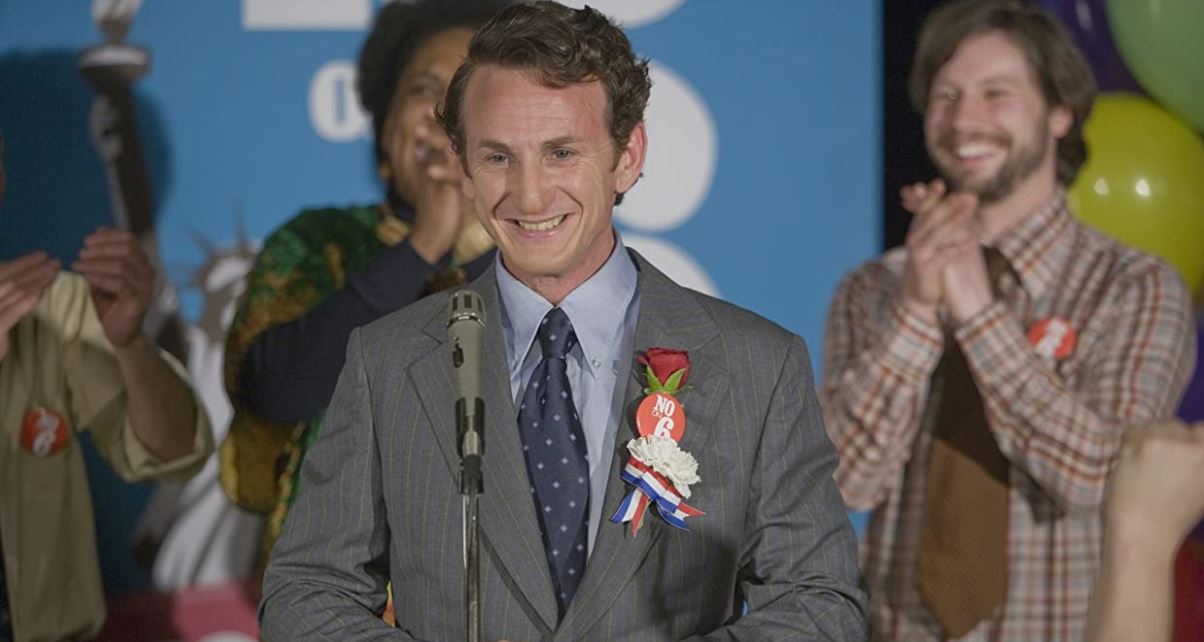 In November, Penn accused President Trump of murdering “100’s of thousands of Americans.”

He wrote, “Had it only been his histrionic man-child narcissism, he’d have been a punchline prissy president. It’s his sociopathy & murder of 100’s of thousands of Americans & his vainglorious crew of smarmy sycophants that will define him in infamy.” 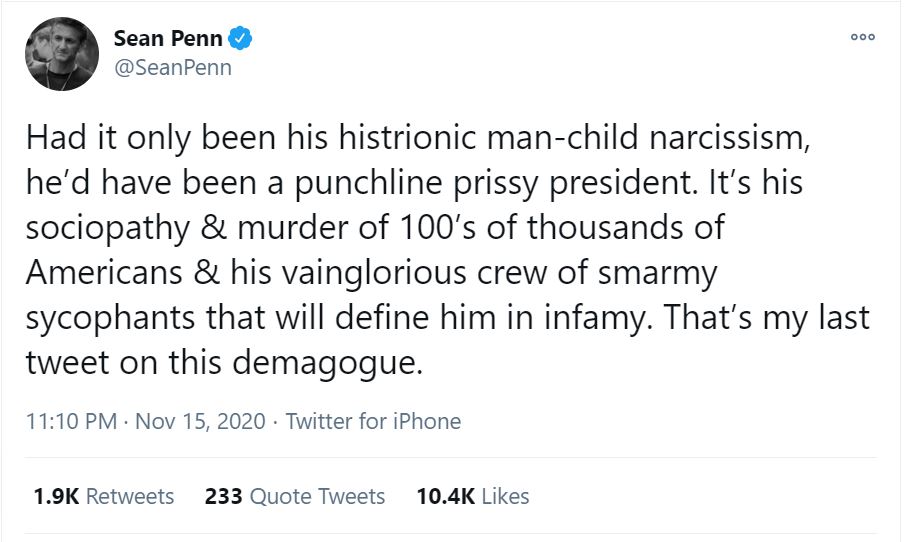 Also in November, he referred to him as a “Führer frenzied.”

Penn wrote, “Portrait of a Führer frenzied. Now, Gods most caramelized kabuki mask of a man spends his remaining weeks kicking, screaming, and harming others.”

“May his cries for attention lead him to halls of detention. He is less lame duck president than 9 year old bully-brat on angel dust,” he added. 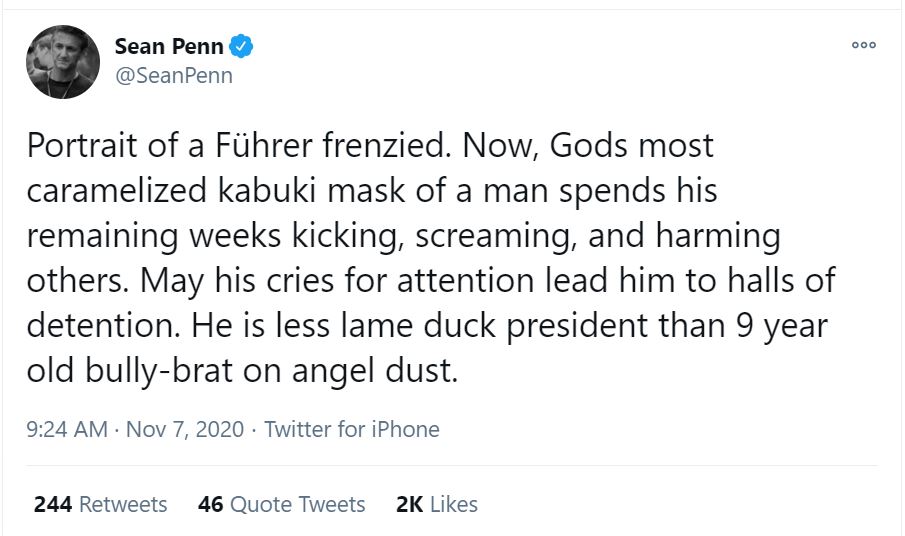 Penn also accused President Trump and the Republican Party at large of being tools of Russian leader Vladimir Putin.

He wrote in October, “Republican leaders have given themselves a lot of slack as they’ve fallen into the ‘party of Trump.’ The reality is that they are the party of Putin. Trump is just the brand. He’s the salesman, the vessel, who sold them prurience as patriotism.” 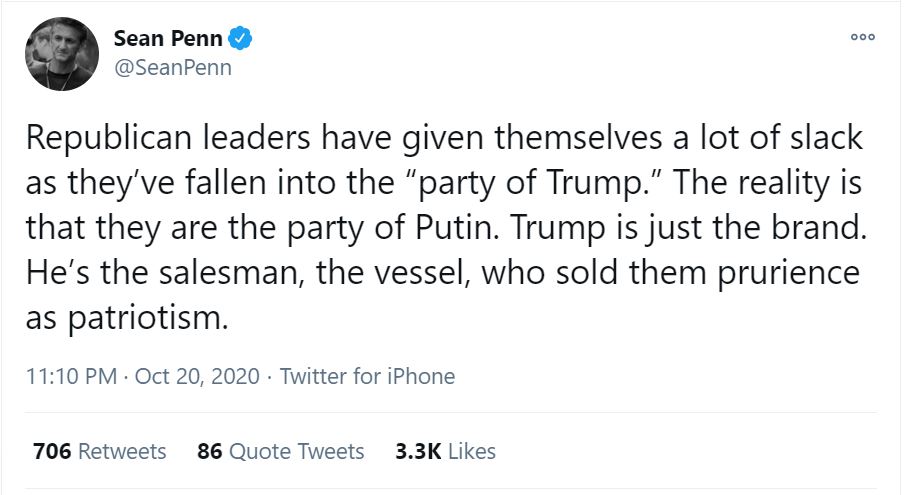 What do you make of Sean Penn’s comments regarding President Donald Trump?