A new rumor suggests that WandaVision will introduce the main villain for the upcoming Doctor Strange In the Multiverse of Madness.

A new rumor suggests that the newly launched Disney Plus series WandaVision will connect with Doctor Strange in the Multiverse of Madness, with Elizabeth Olsen’s Wanda Maximoff playing an important role in connecting the two Marvel projects. 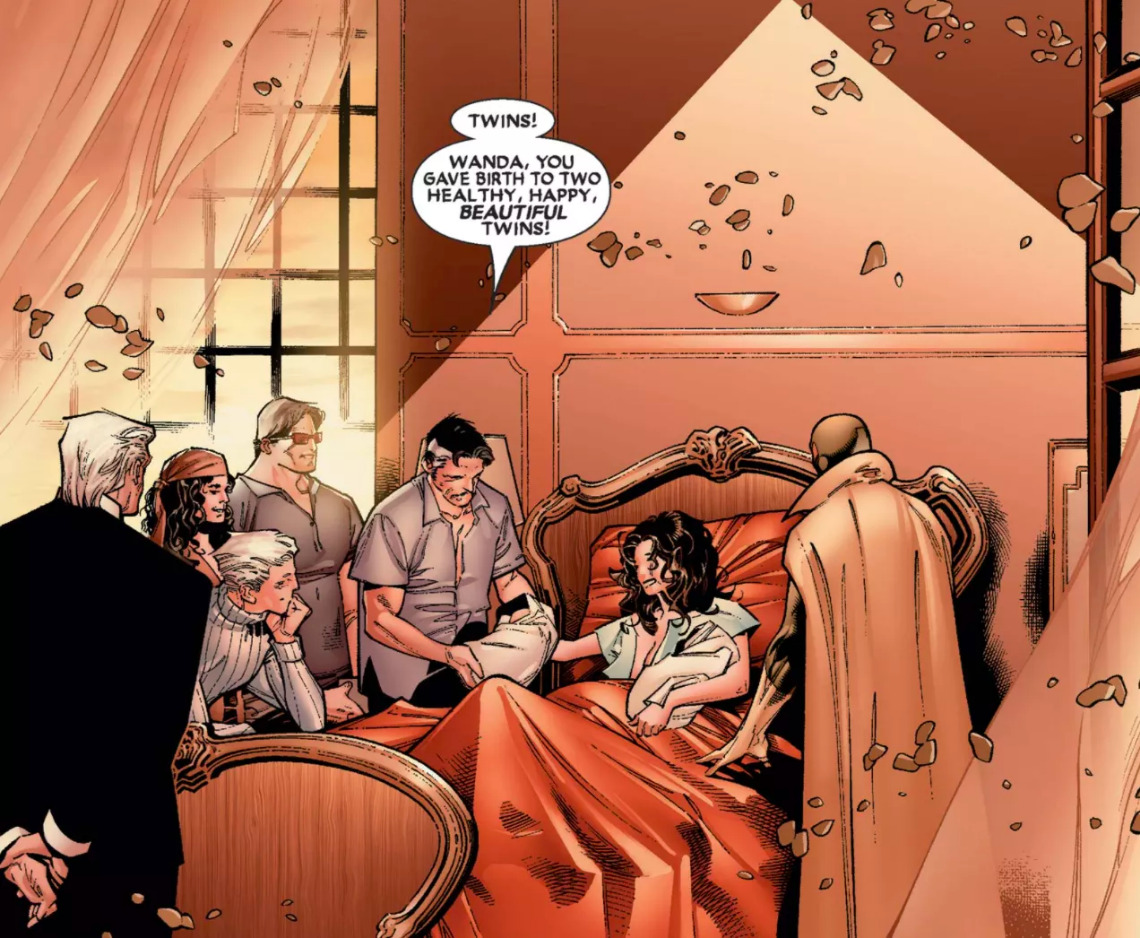 With the launch of the new series on Disney Plus, WandaVision has seen a litany of new preview clips, plot speculation, and even rumored details on the first two episodes of the show (which, luckily, didn’t pan out). And now that we’ve all seen the first episode, I’m confident that a number of slights within the show are indicators of what is to come.

What’s around the corner? According to a source close to Bounding Into Comics, it’s none other than Mephisto, who will not only be making his debut on the Disney Plus show, but will also go on to become the main villain for Doctor Strange in the Multiverse of Madness.

However, the most important element of Mephisto’s arrival is Wanda, as it appears that she will be responsible for creating Marvel’s version of the demon Mephistopheles. 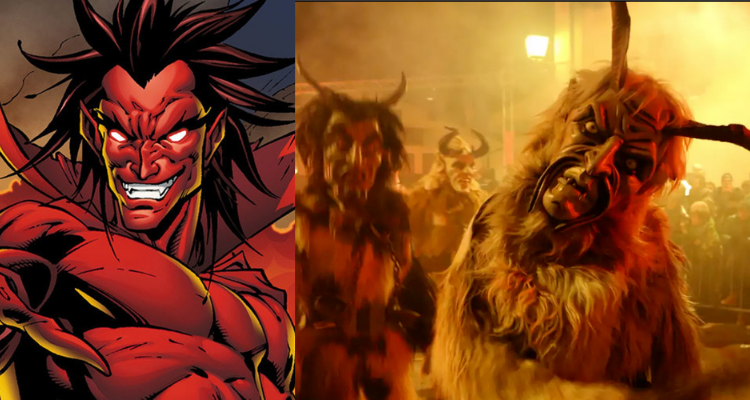 Related: WandaVision Producer Points To Marvel Comics’ Monica Rambeau as Reason Why MCU Version Is “A Leader Among Heroes”

The demon, also likened to the Judeo-Christian concept of Satan, was first introduced in The Silver Surfer #3 in December of 1968, and would go on to make a number of comic book appearances across an umber of titles, including the Fantastic Four, the West Coast Avengers, the Amazing Spider-Man, and cameos in various short-lived titles.

Created by John Buscema and Stan Lee, as noted above he was conceptually inspired by the Mephistopholes of Faust legends, Mephisto is a demonic tempter whose influence is regularly felt at key moments throughout the Marvel Universe’s history. Most notably, Mephisto played a role in the Infinity Gauntlet story line, Ghost Rider’s origin, and as a worthy antagonist to Doctor Strange. 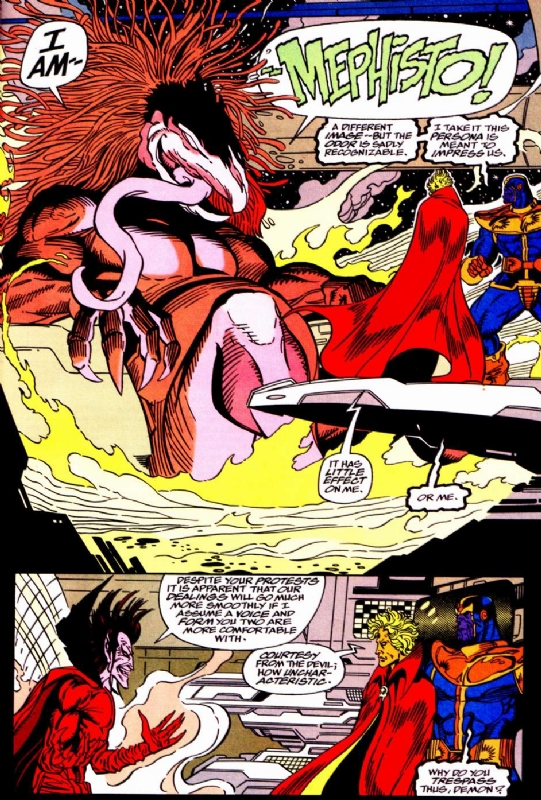 Of course, his most infamous moment may be his appearance in Amazing Spider-Man #545, wherein writer Joe Quesada had Peter Parker make a deal with the demon, trading his long-time marriage with Mary-Jane Watson for the life of Aunt May (a change made editorally, Quesada argued, because a married Spider-Man would not have been “relatable”). 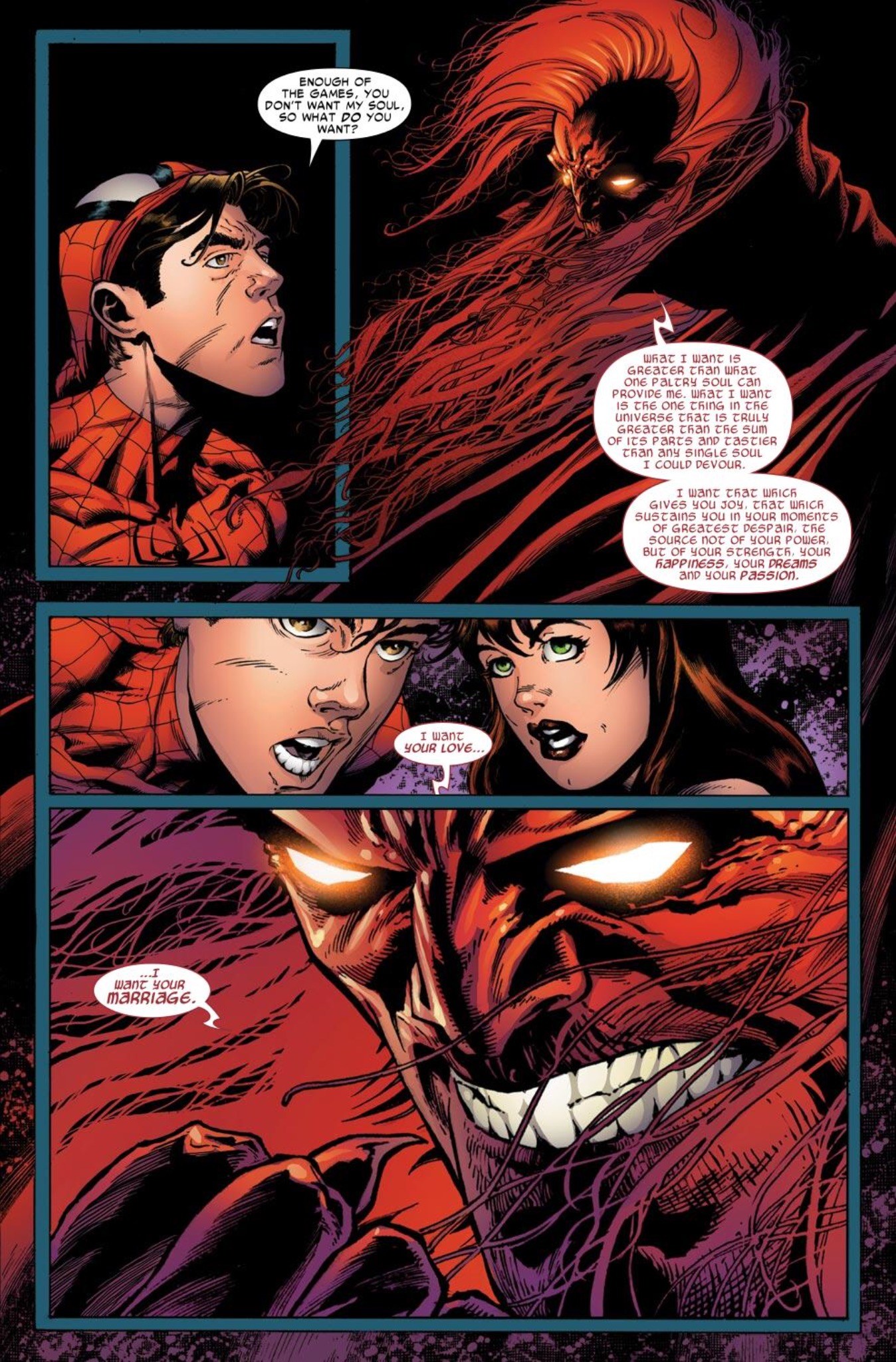 There were even times when Mephisto had posed as the actual Judeo-Christian concept of Satan, even ruling over a domain called Hell, which holds a number of unsavory characters from Earth’s history dwelling in that realm- notably Hitler, Attila the Hun, and Blackbeard the pirate. 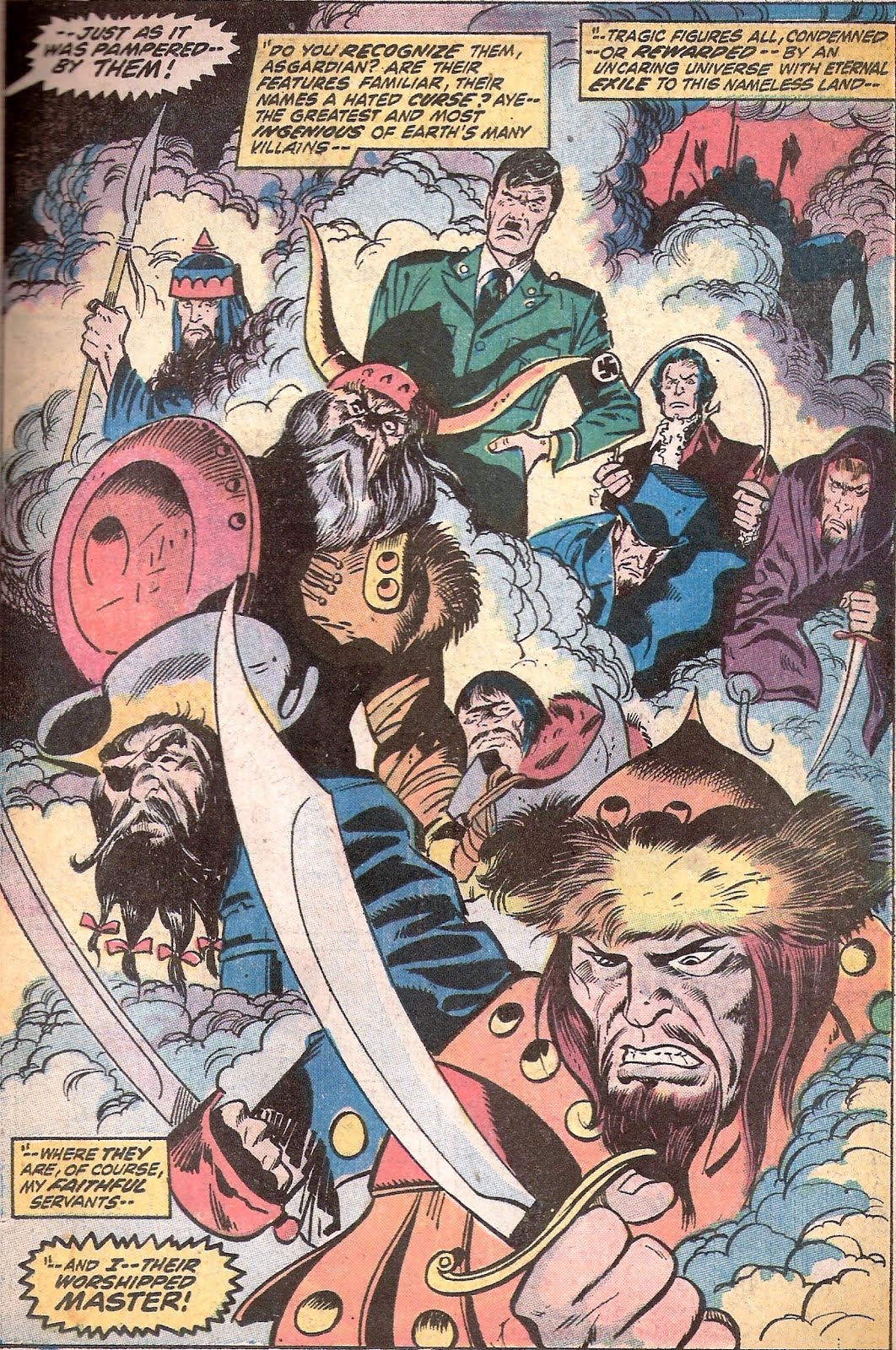 1985’s The Vision and Scarlet Witch featured the pregnancy of Scarlet Witch and her giving birth to twin sons, Thomas and William, who actually turned out to be fragments of Mephisto’s soul.

Their “birth” turns out to be the key to his full revival, as through an unwitting servant named Pandemonium, Mephisto absorbs the two children, killing them in the process. When Scarlet Witch learns of their demise, she has a mental breakdown and declares herself an enemy to the Avengers, blaming them for the death of her children. 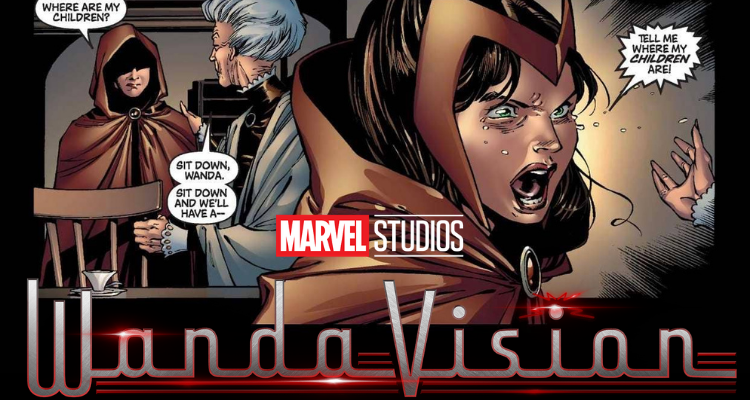 What The Show Is Setting up

There is a particular reference in the Wandavision Disney Plus series that indicates, more succinctly, that Mephisto is an inevitablaility.

In the second episode of the series, Wanda, alongside her neighbor Agnes, attends a small get-together to discuss an upcoming talent show. During this scene, we are introduced to a woman named Dottie, who has substantial influence over local affairs.

During this scene, Dottie chides a fellow member of the gathering for missing some elements of the planning phase for the event. Stating, “The devil’s in the details, Bev.”

To this, Agnes replies, “That’s not the only place he is.” 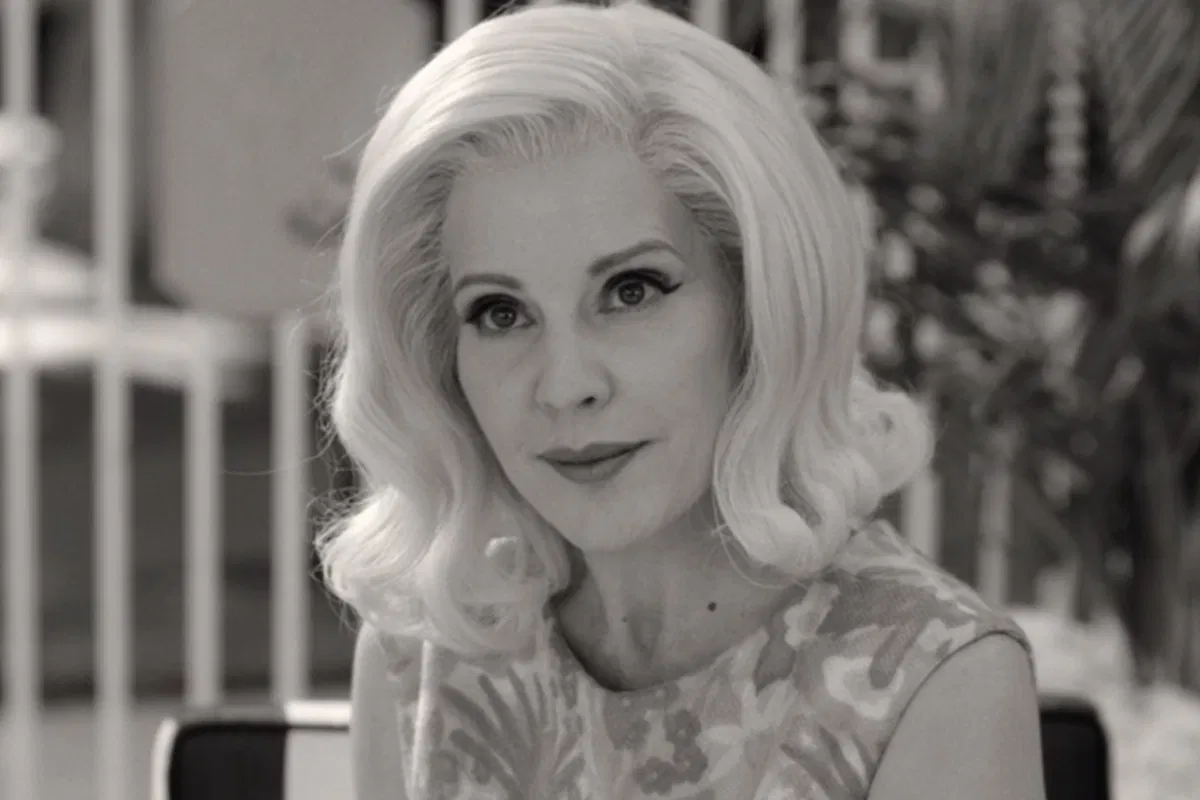 Indicators are strong that we are getting the Marvel Cinematic Universe version of the Mephisto, but what’s of particular interest is how he could be portrayed, as though we may still see Scarlet Witch reach an eventual mental breaking point, it looks like Olsen’s portrayal won’t go on to become an enemy of the Avengers.

At least, not yet. 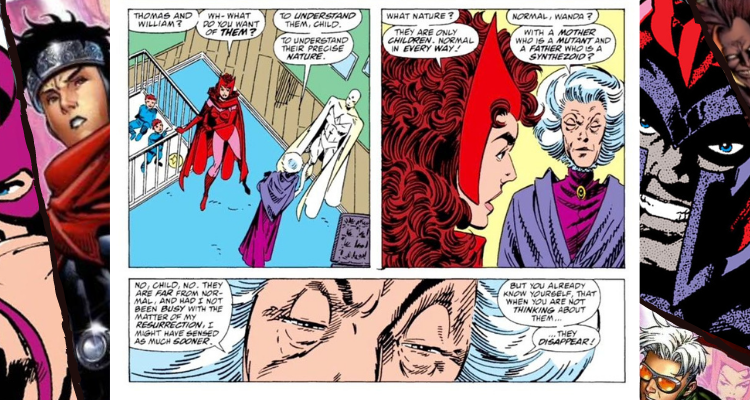 A Devil For A Series And A Film- Is the World Ready?

Western culture is mostly receptive to concepts like the Devil, and Hell. However, some bigger markets, particularly China, are not so receptice to these foreign occult and religious concepts.

It wouldn’t be surprising to find that executives could actively be shying away from Mephisto, since Hollywood, and Disney in particular, has made a turn in recent years to relying on the Chinese market for most of its return on bigger budget films. They found it for Avengers: Infinity War and Avengers: Endgame and are undoubtedly hoping for the same in regards to the upcoming Doctor Strange sequel. 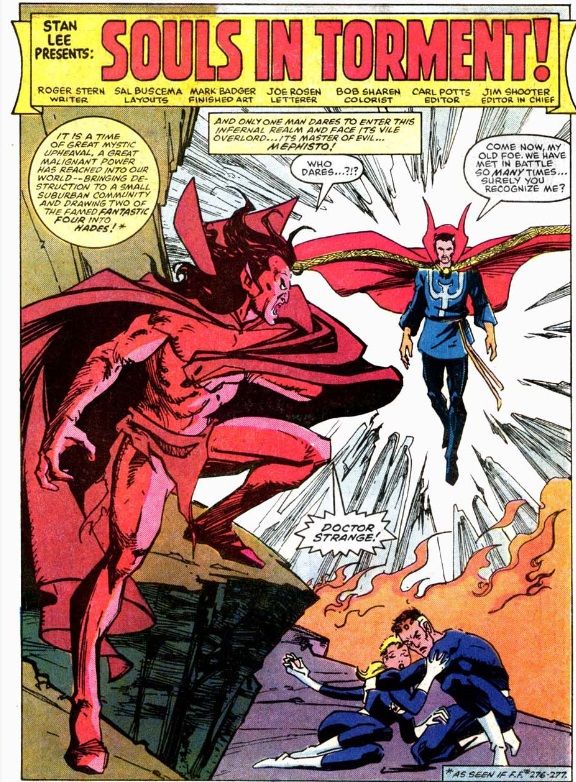 But with Wandavision, Marvel could truly be setting up the villain for Doctor Strange 2 in Mephisto. A literal devil for the Marvel Cinematic Universe. This dance with the devil could then result in either a test of the censorship laws of overseas markets or a complete a discarding of the market altogether in favor of playing more freely with a demonic character.

It’s also possible that we could see the rumored casting of Evan Peters as Mephisto in WandaVision come to fruition, whose potential confirmation for Doctor Strange in the Multiverse of Madness would only servce to solidify the rumors of the film’s main adversary. 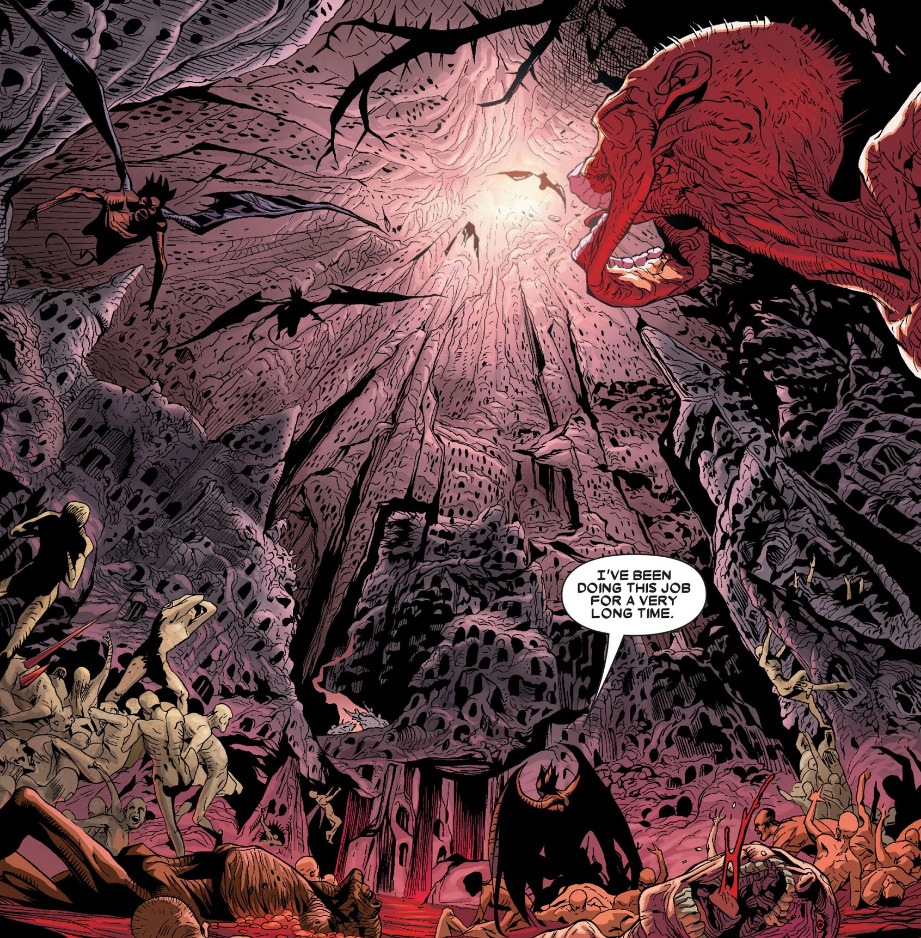 What do you think of Mephisto making his debut in Wandavision? What about the possibility of him being the main villain for Doctor Strange 2? Sound off in the comments below or let’s talk about it on social media!

Wandavision: The Hype, The Potential, And The Disappointment