From Steven Kostanski, writer and director of Manborg, The Void, and the incredible 5-minute short Bio-Cop, Psycho Goreman (also known as PG: Psycho Goreman) is this joyous blend of absurdly bloody horror, awesome makeup effects, and laugh out loud humor.

From Steven Kostanski, writer and director of Manborg, The Void, and the incredible 5-minute short Bio-Cop, Psycho Goreman (also known as PG: Psycho Goreman) is this joyous blend of absurdly bloody horror, awesome makeup effects, and laugh out loud humor.

Known previously as The Arch-Duke of Nightmares (and the Dark Lord of Wonderful Smooches for a gloriously all two brief few seconds), Psycho Goreman (or PG for short) is from the planet Gigax where he served as a slave to the Templar alien race. 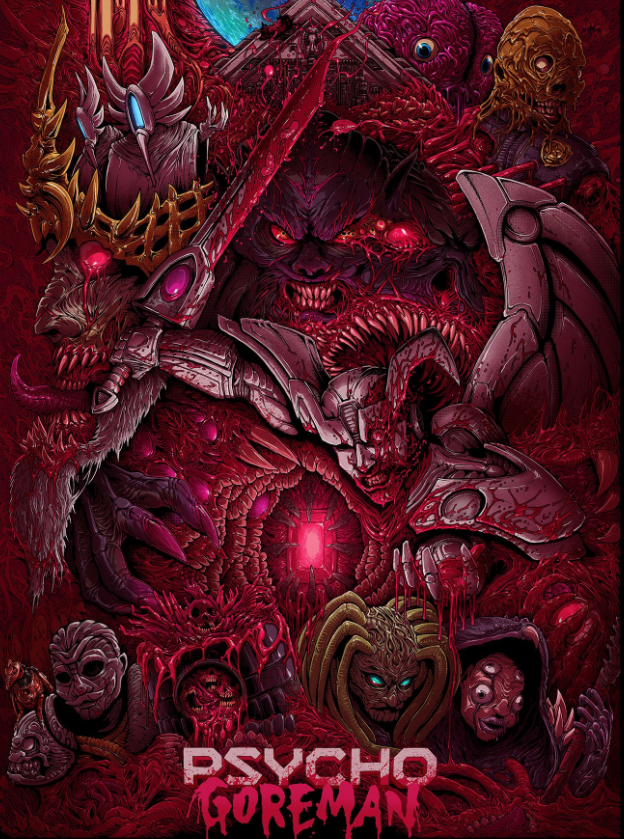 He discovers a gem that makes him more powerful than anything else in existence and begins slaughtering his former masters. The Templars eventually separate PG from the gem and imprison him in what is thought to be an impenetrable form of incarceration.

Back on Earth, young siblings Mimi (Nita-Josee Hanna) and Luke (Owen Myre) accidentally discover PG’s resting place in their backyard after a playing a complicated made-up game known as Crazyball. Intimidated at first, Mimi and Luke realize PG has to obey their every command since Mimi is in possession of the gem.

Psycho Goreman manages to combine what horror fans love about 80s horror in a gory film that is more hilarious and entertaining than it is scary. The special effects in the film are mostly practical. All of the monsters look like they’re some kind of rubber suit like Godzilla or Super Sentai/Power Rangers while the kills and blood sequences seem to all be done practically rather than digitally.

The scene where Mimi and Luke’s dad Greg (Adam Brooks) is using the bathroom only to be visited by PG’s floating head as he shouts directions at Greg to come pick him up is obviously a digital and/or computer generated effect. It’s not that Psycho Goreman doesn’t utilize CGI, but it tends to use it to highlight the traditional effects and or for comedic purposes.

Mimi has this eccentric personality that is not unlike Louise Belcher from Bob’s Burgers. She loves bullying her brother, can’t be told what to do by anybody, is never scared of anything, and is far more in control than her parents are.

One of the highlights of Psycho Goreman is that the kids aren’t affected by monsters or gore. They get bored by anything resembling a backstory whenever PG opens his mouth. The chemistry Mimi has with Greg as well as PG’s chemistry with Mimi and Luke is what makes the film so fun.

PG is initially only interested in slaughtering everyone and destroying anything that gets in his way, but he begins to adapt to Mimi’s ways. Mimi teaches him about hunky boys and telling people to frig off. It feels like a callback to John Connor teaching the T-800 early 90s slang in Terminator 2.

What’s funny is that Psycho Goreman spares no expense on blood and gore, but has no actual cursing whatsoever.

Mentioning Bio-Cop is interesting since it seems as though the character has a substantial cameo in Psycho Goreman. PG turns a regular human cop into a bumbling buffoon with a melted face who begs to be killed regularly. He’s credited as “Zombie Cop” in the film’s credits, but he certainly seems like a blatant reference to the character, which is fun for anyone familiar with Steven Kostanski’s other works. The original NSFW fake trailer for Bio-Cop can be seen here.

Psycho Goreman caters to those who adore cult classics and worship genre films. It’s a throwback to when horror films embraced practical effects and relied on rubber suit monsters for scares. Its ridiculous humor makes it feel like it’d be a welcome pairing with the likes of The Monster Squad and House II. PG is the type of character you probably shouldn’t love, but the film introduces enough heart to make the character memorable and likeable.

Psycho Goreman is currently playing in select theaters. It’s also available to rent through most streaming and on-demand services, but is cheaper to rent ($5.99) on Amazon Prime. The HD version of the film can be bought digitally for $14.99 or $12.99 on YouTube. The film can be preordered on DVD ($14.59) and Blu-ray ($16.59) via Amazon. It’s currently slated for physical release on March 16.