When the leg breaks, it usually means months of time away and that could be what happens with Nick Jackson after a possible injury. Also, Damian Priest might have finished up with NXT and be joining RAW or SmackDown within days.

The Young Bucks have been one of the most entertaining tag teams for the past decade. They are special because the brothers can hit spots only thought possible in video games.

On the Wrestling Observer Radio [1], Bryan Alvarez explained how Nick thinks the moment happened in the opening contest. During an eight-man tag match, Jack Evans landed hard on Nick’s leg.

“So, the story I heard was that Jack went for the 360, or whatever, and Nick got his knees up and whatever happened happened,” said Alvarez. “But, Jack landed so hard on his legs that Nick thought he broke one of his legs.”

The final part is about the closing segment. Seemingly, AEW reformed a version of the Bullet Club.

It was a big finish, but Nick’s injury could cause some problems. In particular, The Young Bucks won the AEW Tag Team Championship not too long ago [3]. 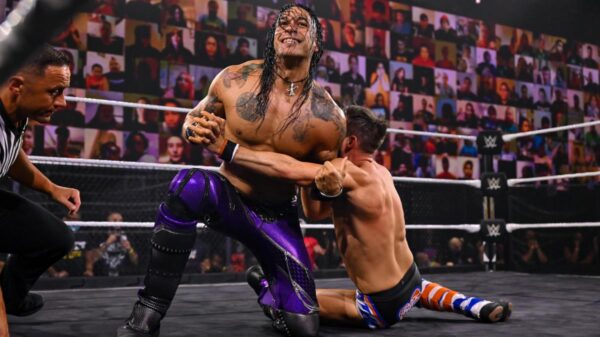 Last week on SmackDown [4], WWE had a surprise debut set as they needed more babyfaces on the blue brand. The idea was for NXT’s Damian Priest to officially join the main roster.

WWE was going to bring Priest in as a friend of Owens looking to balance the odds. The problem, is Owens does not know Priest.

So, Owens informed creative the decision did not make sense. Also, Reigns agreed and the segment was dropped.

At the time, Priest was already present at SmackDown and preparing to debut. Owens was not against working with Priest, but needed their to be actual substance to the storyline.

In the end, Reigns seemed to have final say considering his position on the WWE roster. There is no word on what Paul Heyman [6] thought as he is heavily involved in Reigns’ storylines.

Now, that brings us to yesterday’s NXT. In the opening of the NXT New Year’s Evil special, Karrion Kross defeated Priest.

There is no word if Priest is done in NXT as he seems close to joining either RAW or SmackDown.

Another interesting part of the story is how WWE decided to call Priest up. Usually, it is known for months if someone is leaving NXT, so the brand can properly write them off.