Actor Mark Hamill recently dunked on Rian Johnson and The Last Jedi while thanking director Peyton Reed for the final episode of The Mandalorian Season 2.

Actor Mark Hamill recently dunked on Rian Johnson and The Last Jedi while thanking director Peyton Reed for the final episode of The Mandalorian Season 2.

Hamill’s comments came after The Mandalorian director Peyton Reed thanked Mark Hamill for working with him.

Reed wrote, “Dear Mark Hamill, When I was a kid, this photo hung on my bedroom wall. STAR WARS, and Luke Skywalker in particular, meant a great deal to me. Some things never change.”

He added, “It was an honor and a dream come true to work with you on The Mandalorian. Thank You.” 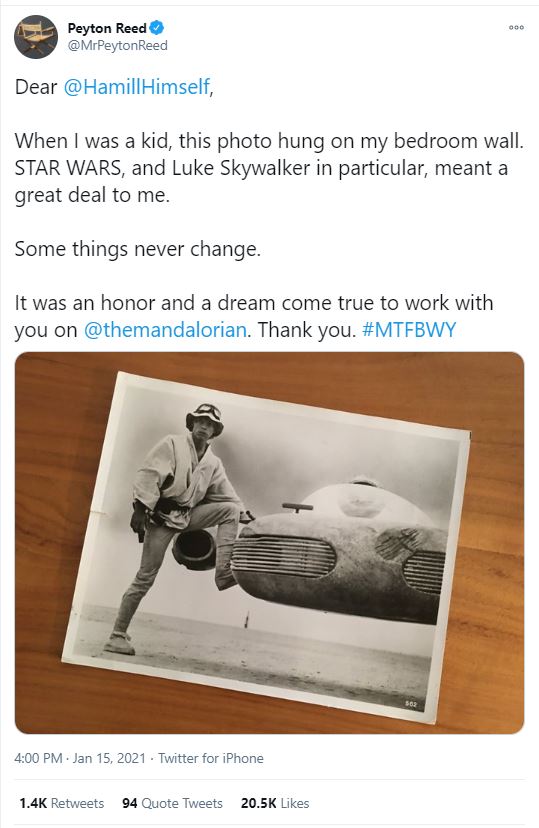 Hamill replied on Twitter where he threw a double dose of shade at Johnson and The Last Jedi when he wrote, “Dear Peyton Reed, I am so grateful to have been given the unexpected opportunity to revist my character when he was still a symbol of hope & optimism.”

“Your assured direction & kindness was a crucial element in the experience & means more to me than I can say. Thank You.” 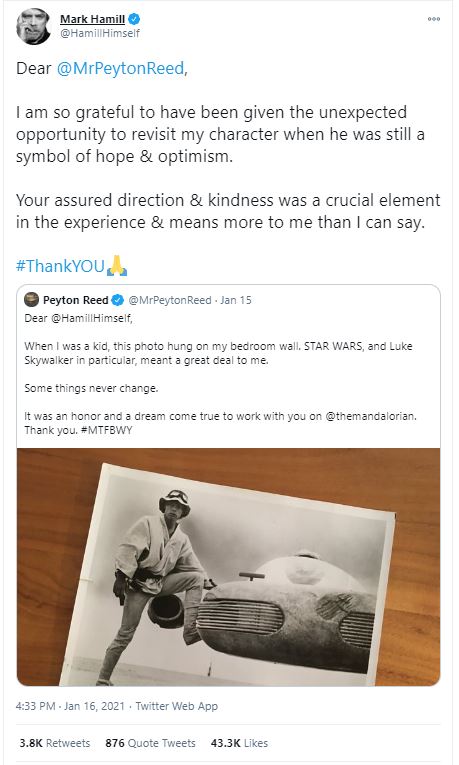 First, if it wasn’t obvious, Hamill is clearly implying that the version of Luke Skywalker seen in The Force Awakens, The Last Jedi, and The Rise of Skywalker is no longer a symbol of hope and optimism.

This isn’t the first time Hamill has thrown shade at the sequel trilogy, and it probably won’t be the last.

Back in September 2019, he made fun of The Force Awakens when he responded to the official Star Wars Twitter account counting down their favorite Luke Skywalker quotes.

Hamill shared an 11th quote from The Force Awakens, the movie where Luke Skywalker has no lines. 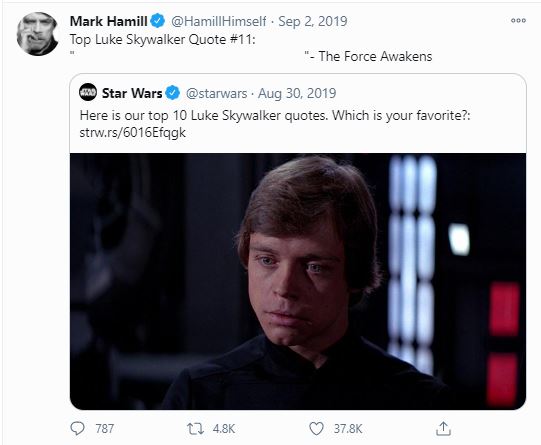 Back in March 2019, he criticized The Force Awakens for killing off Han Solo. Hamill stated, “I just thought, Luke’s never going to see his best friend again. You look at it in a self-centred way. I said that it was a big mistake that those three people would never reunite in any way. I guess I was wrong, because nobody seems to care!”

“I have to stipulate that I care, but it didn’t really seem to affect the larger audience. Luke, Han and Leia will never be together again, and I’ll probably never get to work with Harrison again,” he added. 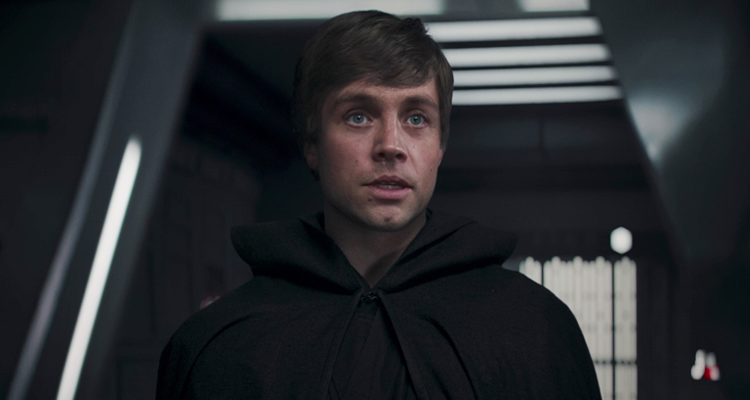 He then took issues with The Last Jedi explaining, “Then the second thing was that they killed me off. I thought: oh, okay, you should push my death off to the last one. That’s what I was hoping when I came back: no cameos and a run-of-the-trilogy contract. Did I get any of those things? Because as far as I’m concerned, the end of VII is really the beginning of VIII. I got one movie! They totally hornswoggled (tricked) me.”

In fact, Hamill pointed out that Rian Johnson instructed him to completely ignore C-3PO, but Hamill insisted Luke would not do that.

Hamill explained, “They had me walking by 3PO, not even acknowledging him. I said: “I can’t do that! He (The Last Jedi’s director, Rian Johnson) said, “Okay, go over and do whatever.” So I went over, and I did whatever. They say it in the script: “Forget the past, kill it if you have to”, and they’re doing a pretty good job!’” 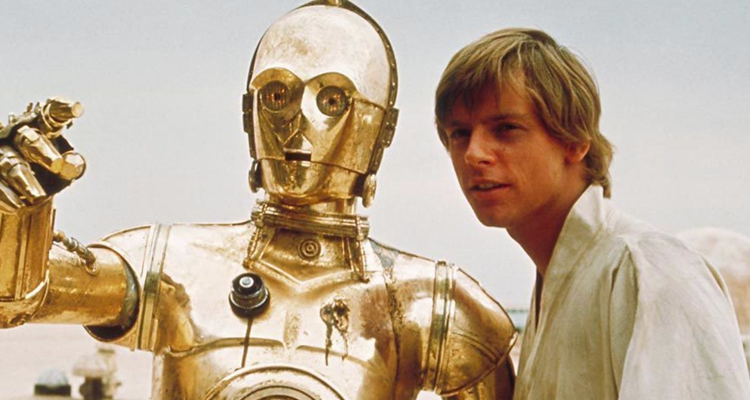 In August 2018, Hamill made clear he did not understand why Luke had given up in The Last Jedi.

A fan asked Hamill and Rian Johnson, “Why did Luke give up in the Last Jedi? What other events made Luke give up? From what we know Luke made one mistake and he gave up. That doesn’t really make sense. Could you please help me understand.”

Hamill replied, “When I understand, I’ll let you know.” 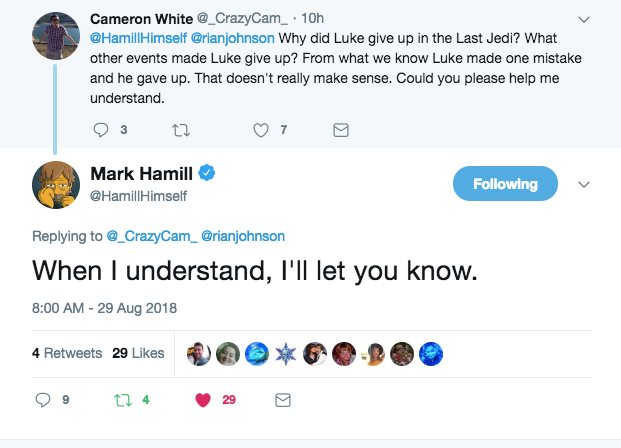 So, it’s quite obvious Hamill is definitely contrasting the version that shows up in The Mandalorian Season 2 with the version Lucasfilm gave us in the sequel trilogy.

However, that might not be the only piece of shade Hamill was throwing. Now, it’s possible we could be reading into this, but he might also be throwing some shade at Rian Johnson’s character.

Hamill makes it clear to point out that Reed’s “assured direction and kindness was a crucial element in the experience.” 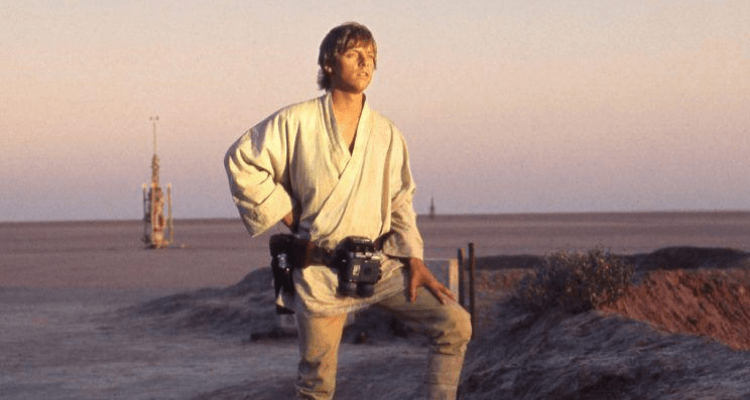 Rose recalled, “We finished all of our bits and they asked me to come down to camera. And I thought, ‘Oh well, maybe they’re going to say thank you for being one of the heritage characters and giving 30 years and all that.’”

He continued, “But what they did was, they gave me a Millennium Falcon sign that had the day and the date on it, the scene number, and they said, ‘Can you look at camera and say ‘It’s a wrap?’ Because that would be really funny.” 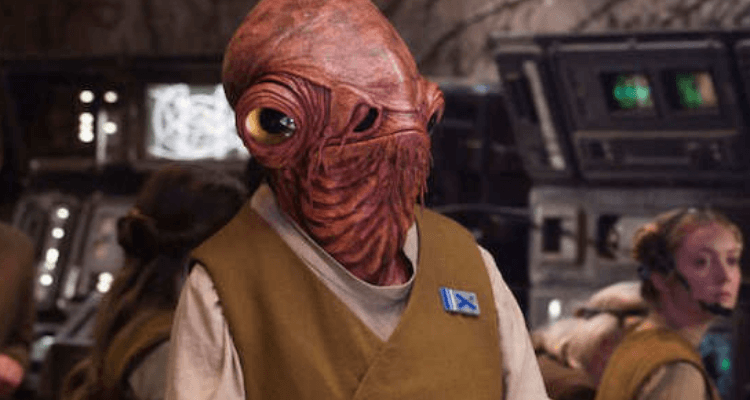 Rose then revealed he was crying in the suit, “I was actually in tears in the suit because I thought – after everything, after hoping there’d be something, after knowing there wasn’t going to be anything else, Ackbar’s final moment before he went in to the box was just a big joke about ‘It’s a wrap.’ They just thought ‘Wouldn’t it be funny?’ And that was the sum total of my life as Ackbar.”

“I disappeared down the back and couldn’t come out for a good 30 minutes out after that.” He adds, “They took over a little bit of your lives.” He concludes, “They become part of us and we are part of them,” he concluded.

So, it’s possible that Hamill might not only be dunking on the sequel trilogy, but also on Rian Johnson as a person.

What do you make of Hamill’s comments?