Prior to UFC 257, Dana White reported that Khabib Nurmagomedov [1] had said he might fight again, if one of the top lightweight contenders impresses him. But, the star’s longtime coach, Javier Mendez, thinks the only match-up that might bring Khabib out of retirement is Georges St-Pierre [2].

In fact, Mendez beleives Nurmagomedov should hold out for the GSP bout, if he in fact wants it. 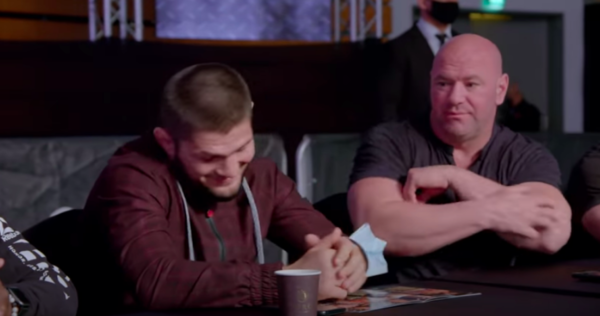 Mendez thinks Khabib should “hold out” for GSP fight

Leading up to UFC 257, there was endless speculation about Khabib’s future. The narrative was that the card’s headlining fights could determine who would fight for the lightweight title net, and that maybe, Khabib would be defending the belt.

Well, since then, Mendez spoke with Submission Radio. [3]While speaking about the possibility of Khabib fighting again, he said this (quotes via MMA Fighting [4]).

“I didn’t even know if [Conor] was gonna do great that Khabib would even fight him, cause he’s gotta ask his mother’s permission first,” Mendez said.

“You guys gotta remember, the key thing is that he has to ask his mother too for permission.

I didn’t see GSP being offered, and I thought the only way he was gonna come out of it was if GSP was in that picture.

But based on what happened, I don’t see why he would want to come out and fight anybody. Why? This fight with Dustin is not gonna motivate him. He’s not looking at the money aspect of it.

“But if they can put GSP on the table, maybe there’s a chance there. And I’m not saying it will happen, because I don’t know, but I’m just saying GSP might be the only one.

I’ve always thought it was GSP, because that’s what his father wanted, and I think if they can get that one worked out and he can get his mother’s permission, I think that one could work.

But I don’t think anybody else is gonna work. Period.”

Mendez certainly isn’t the only person who has opined that a bout with GSP, could be the match-up that gets Khabib back in the cage. That said, White recently claimed that Nurmagomedov is no longer interested in fighting GSP. [5]

What does seem pretty clear is that Khabib has no interest in fighting the likes of Poirier or McGregor again. He’s repeatedly said those bouts don’t interest him.

Could Charles Oliveira, who Khabib never fought, change the latter’s mind? If he faces Poirier and scores a dominant win?