The passing of Brodie Lee [1] has hit the wrestling world hard. Family, friends, colleagues, and fans continue to mourn his death.

His wife, Amanda Huber was invited to the AEW Unrestricted podcast recently, where she offered insight into Lee’s final days before he passed away [2].

And, the latest on Tegan Nox and her latest injury.

Insight On The Final Days Of Brodie Lee

Family, friends, and fans continue to struggle with Brodie Lee’s passing. We all continue to have so many questions around his death. Recently, his wife Amanda Huber offered some insight on his final days while on the AEW Unrestricted podcast. [3]

She did start off with how Brodie struggled in the beginning during his workouts, his negative COVID-19 tests, his early bronchitis and allergies diagnosis, plus how he was finally taken to the hospital and placed in the ICU. She also went into detail about Halloween with her kids, Brodie’s potential lung transplant, his tracheotomy procedure, and how things were going well at the end of November in terms of Lee’s progress, only for it all to take a turn for the worse shortly after he suffered a panic attack when he was taken off his ventilator.

By early December, Brodie had suffered from a lung infection, and the idea of a transplant was revisited, but by December 16th Amanda hadn’t heard anything concrete from doctors.

On December 24th, Brodie’s wife headed back home to be with her kids. She got a phone that night from the doctor stating Lee’s “end of life care” needed to begin.

By this time, Brodie’s heart and kidneys were failing, and because it was Christmas Eve, Huber needed to stay with the kids for Christmas morning.

On Christmas, Lee’s family figured out a way to fly in, despite COVID-19 restrictions. That night, Amanda’s sister- and brother-in-law flew back with her to Jacksonville, as the kids were with her mother-in-law and they’d be driving up the next day.

On December 26th, Big E, Cody, Peyton Royce, Shawn Spears, Tyler Breeze, as well as Meghan and Margaret from AEW’s [10] Legal and PR team all went to the hospital for their final goodbyes. Amanda went back to the hotel that night, along with Big E and Cody, to tell Brodie Jr. about his dad passing away.

Lee’s official cause of death was idiopathic pulmonary fibrosis; “idiopathic” is used when the root of the illness is unknown, and “pulmonary fibrosis” is scarring of the lungs. Huber is still waiting for an autopsy report for more information.

Our thoughts and prayers continue to be with Brodie Lee’s wife, kids, family, and friends. Here’s hoping an autopsy can shed some sort of light during this grieving process. 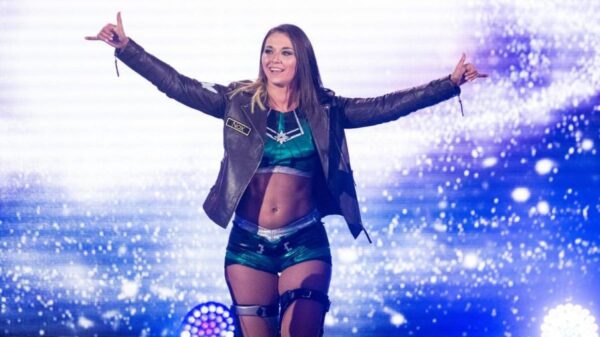 NXT’s [11] Tegan Nox is currently suffering yet another knee injury that has placed her on the “out of action” list. While this setback can bring any superstar down [12], Nox remains positive about the situation. While no timeframe has been given around a return date, she does seem “ahead” of schedule with her recovery. She recently noted:

“Recovery is going really, really, well. I’m way ahead of where I should be right now, which is good.”

Sadly, she has had to deal with injuries multiple times during her NXT career. The good news is that Teagan is a young and impressive talent within the women’s division. She’s sure to do big things once she returns to the ring.