Carol Burnett loved making Harvey Korman break character and laugh during skits on her long-running comedy show. This was easily accomplished in one episode where Carol, Harvey, and Vicki Lawrence wore matching dresses for a PTA talent show. 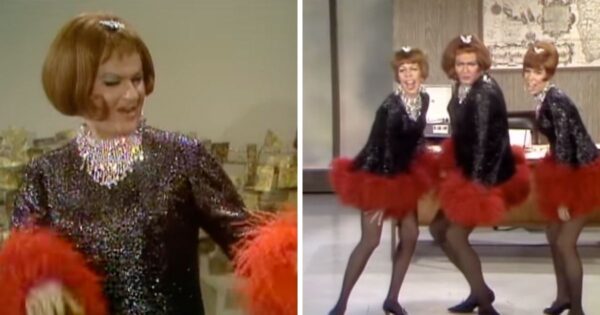 Harvey was such a good sport that he even wore lots of makeup and high heels.

“The Carol Burnett Show [1]” entertained us for eleven seasons. We never knew what we would see on this beloved family-friendly show. We only knew we were going to laugh together as a family watching it.

A half a century has passed since the show began airing and it is still so fun to watch all these years later.

It is comedy that stands the test of time!

RELATED: Carol Burnett Loved Every Guest On Her Show Except This ‘Belligerent Little SOB’ [2]

Harvey Wears A Dress For The PTA Talent Show

The “Carol & Sis: PTA Talent Show” skit is a great example of comedy gold. Even though political correctness would likely prevent this from being filmed today, we still have the clips and they are just as hilarious.

Carol and Vicki lost it when he emerged from the bathroom dressed as a woman. Harvey looked as those he could have been a contestant for a drag contest.

He clearly didn’t want to do this, but it was for the children after all.

He got changed in his office, but refused to walk down the street to the car dressed as a woman when it was obvious that he was not.

He didn’t want anyone to see him. This was a different time, after all. This was definitely not Joe Biden’s America.

But, people kept walking into his office while the ladies were getting the car. As luck would have it, his boss walked in on him wearing full female attire and overly dramatic eyeshadow.

But, it’s not what you think!

Korman keeps losing his cool during these embarrassing situations. Everyone reminds him that he’s beautiful when he’s angry. But, that doesn’t appear to help the situation. He isn’t the most attractive woman and it’s even worse when he’s mad.

The trio ends up practicing their performance in Harvey’s office. Somehow Harvey Korman makes it through the ordeal without spraining his ankle in those heels.

Watch the video below for a good laugh and a trip down memory lane!

Hilarious! That’s certainly not something cancel culture would allow to be filmed today!