Obviously, Dustin Poirier [1] would love to have a quick night at UFC 257, and quickly take out Conor McGregor [2], as he did to him in 2014. But, if the lightweights end up going to war for multiple rounds, Poirier sounds pretty confident he’ll emerge the victor. 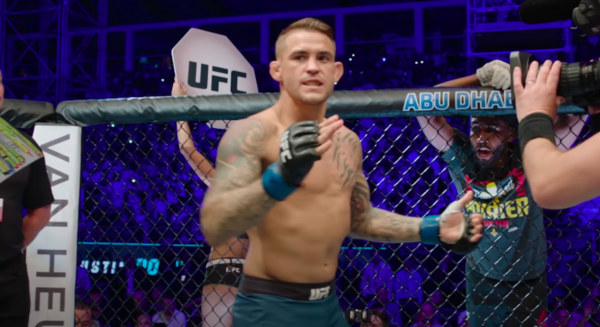 Poirier says he can “suffer more” than McGregor

The decorated fighters are set to battle in the headliner of UFC 257, which will go down this Saturday in Abu Dhabi. When the two met before, way back at UFC 178, McGregor finished Poirier with punches inside of two minutes.

Well, in advance of the rematch, Poirier spoke with MMA Junkie [3]. While discussing where he sees him having the advantage of the massive star, ‘The Diamond’ said this.

“I feel like the better fighter wins in the longer fights,” Poirier said. “Anybody can get hurt early or submitted early in a fight.

… Those later rounds, I get going. I’m sure Conor’s made adjustments. He has slowed down in the later rounds, but I think the longer this fight goes, the better it plays out for me.”

“…Of course, I would love to go in there and get it over with early (and) not take unnecessary damage,” Poirier said.

“But I just think a fight that plays into will and want and a position where we have to dig down and suffer, I think I can suffer more.”

“The plan is to beat Conor McGregor by any means necessary: Blood and guts and fight for the world title again.”

There are certainly solid reasons to predict that the longer the fight goes, the more it will favor Poirier.

McGregor boosters and his camp would likely point to the fact he’s gone 25 minutes before and won: the star took his 2016 rematch with Nate Diaz via decision.

But, the only other time McGregor’s been outside of round three was when he was submitted by Khabib Nurmagomedov in 2018. During his entire UFC run, has only fought beyond ten minutes, three times (the other was when he bested Max Holloway by decision in 2013).

Poirier, on the other hand, has fought past the ten-minute mark 12 times during his UFC tenure. He’s also come out on top in several, grueling wars (as he did in his bouts with Justin Gaethje and Dan Hooker).

There’s certainly the possibility that Conor has taken his cardio to a new level. But, don’t be surprised if Poirier turns to his wrestling and clinch game in an effort to further fatigue the hard-hitting fighter.