Dustin Poirier had one of his best performances to date at UFC 257, and recently he made some interesting comments as to why.

It doesn’t sound like Dustin Poirier was a big fan of being locked down in Abu Dhabi, leading up to UFC 257. But, ‘The Diamond’ also believes that experience helped him deliver his greatest victory to date. 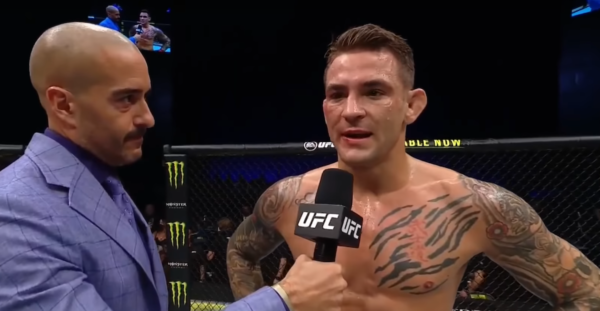 Poirier says he was an “assassin” by fight time

As you surely know, Poirier dropped jaws throughout the sports world last Saturday, by finishing Conor McGregor in round two. Leading up to the bout, the consensus seemed to be that the rematch would be closer than their 2014 bout, when McGregor quickly scored a stoppage win.

After all, since that fight, Poirier has established himself as one of the greatest lightweights of this generation. But, McGregor was still a sizeable favorite to win the bout.

Well, after Poirier’s massive win, he was asked about his time on Yas Island, and the former interim champ had this to say (quotes via MMA Junkie).

“I don’t know, part of it might be from (explicit) spinning my wheels for two weeks sitting in a hotel room. You couldn’t call this ‘Fight Island.’ This is ‘Fight Hotel.’

The furthest I could go was to the workout room. This was like I was in prison in my own mind here.”

But, while reflecting on how he felt by the time it was ready to fight, Poirier also said this.

“Tonight was one of the best (nights) I’ve ever felt,” Poirier said. “I was emotionless. I was an assassin, and I was here to execute.

I was locked in and loaded and I felt nothing. I felt very focused. It was a great feeling.

But damn, when I let the dog out and perform, I can scrap, man. It feels good, but there was no emotion.”

These are pretty interesting comments from Poirier. Could it be that due to the lockdown, because Poirier wasn’t out and about, attending multiple pre-fight events and interacting with thousands of fans, he was able to keep his emotions in check?

And if he does end up fighting McGregor for a third time, how will his mindset be then?