UFC President Dana White has made it clear the promotion hopes to book a fight between Israel Adesanya [1] and Jon Jones [2]. But, White is also putting the brakes on expectations that the all-star fight could happen anytime soon. 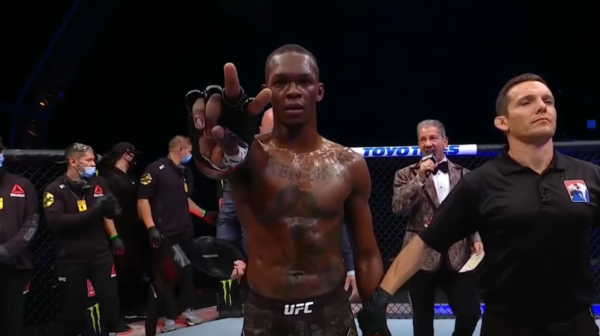 White says there are “massive hurdles”

If you’re a big fan, you know that Adesanya and Jones have been going to war via social media and interviews for months. Both men have called for the super-fight, the big question is, however, when could it happen.

Well, recently White spoke with ESPN [3], and of course, he was asked about the possibility of an Adesanya – Jones fight. The UFC President said this (quotes via MMA Junkie [4]).

With Jon Jones moving up to heavyweight, I don’t know. Then there’s all the talk between him and Adesanya. I don’t want to get too excited,” White said.

“Adesanya still has to fight (UFC light heavyweight champion) Jan (Blachowicz), and Jones is at heavyweight.

“There’s so many massive hurdles that these guys need to get over, so don’t get excited thinking about Jon Jones vs. Israel Adesanya.”

And, while discussing about what weight the Adesanya – Jones fight would take place at, if it happens, White said the following.

“Jon Jones fought at light heavyweight his whole career and Adesanya is moving up to fight Jan for the title,” White said.

“But does Jon Jones ever want to go back to light heavyweight again? So that just blows the whole thing out of the water.”

No, although a gazillion fans likely want to see this fight, White’s being pretty transparent. A lot does have to fall into place before the bout can happen.

Will Adesanya beat Blachowicz on March 6th? And if he does, would Jones be willing to come back down to 205 to face him?

Based on comments ‘Bones’ has made recently, it certainly doesn’t sound like it. He’s bulked up for a run at heavyweight and hopes to fight for that belt in 2021.

And, is the UFC really going to be on board with Adesanya moving up to heavyweight to fight Jones? Before the latter fights for the title? And while Adesanya is holding the middleweight belt?

Now, if Jones loses his heavyweight debut, and rethinks his plans for the division, then a fight with Adesanya seems more plausible.