Conor McGregor’s [1] path back to the lightweight title was significantly lengthened by Dustin Poirier at UFC 257 [2], and speculation about the star’s future is making the rounds. Following McGregor’s devastating loss, UFC President Dana White weighed-in on what he thinks could come next for the former champ. 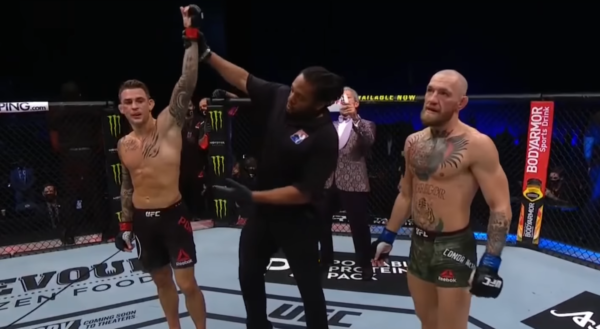 Heading into Saturday’s card, there was widespread talk and debate about what could come next for McGregor, if he won. White made it clear he was hoping to convince Khabib Nurmagomedov to return for a rematch with McGregor.

Well, Poirier put the brakes on all that talk, by taking McGregor out in the second round. Not surprisingly, during the post-fight presser White was asked to comment on McGregor’s future.

Here’s some of what White had to say (quotes via MMA Junkie [3]).

This feels like ‘Rocky 3,’” White said. “When you get off a 310-foot yacht, you know what I mean? You’re living that good life.

“It’s tough to be a savage when you’re living like he lives and has the money like he has. On his way up, he was a young, hungry kid, and he didn’t have any money and he wanted nice things.

He wanted nice suits, nice cars, nice houses. He has everything he ever wanted. I don’t know. It goes this way or that way.”

It’s hard to disagree with anything White said really. McGregor doesn’t need to fight anymore from a financial stand point.

So, it will be interesting what he decides to do, after he takes some time to reflect on the defeat.

Based on what McGregor said in his post-fight interviews, however, it certainly sounds like there’s a good chance he’ll be back.

It’s worth noting that since 2016, McGregor has only fought in three MMA bouts and has recorded just one win. In other words, it’s hard to imagine the fighter ending his career on that note.