Eugene Bareman concedes a lot would have to fall into place before a bout between Dan Hooker [1] and Conor McGregor [2] is tabled. But, the renowned, City Kickboxing coach clearly and understandably would like to see Hooker battle the star. 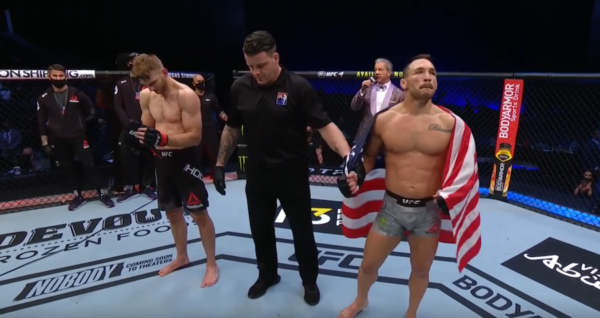 Bareman “definitely” will push for Hooker versus McGregor

Both Hooker and McGregor fought at last weekend’s UFC 257 card, and both lightweights suffered stoppage defeats.

Hooker took on Michael Chandler in the former Bellator champ’s UFC debut, and was finished with punches in the opening round. McGregor battled Dustin Poirier in the headliner, and was put away by a Poirier flurry in round two.

Leading up to UFC 257, there was a lot of speculation that the winners of these two fights could advance to a title fight. So, what about a match-up between the losers?

Recently Bareman spoke with Combat TV [3], and when asked about that possibility, he said this (quotes via MMA Junkie [4]).

“A lot has to come together for these fights to get made, but that’s definitely a possibility, so I’ll definitely put that out there,” Bareman said.

This game is ruthless, but the flip side of it is that this isn’t boxing.

“This is the UFC, and in the UFC the best fight the best straight away. There’s no maneuvering and you have to wait five years for Anthony Joshua to fight Tyson Fury.

It’s none of that stuff. You get in the UFC, and you fight the best straight away.

And for that reason, one loss doesn’t mean anything. In boxing, they put a lot more on that, but this is MMA.

You’re forced to fight the best straight away. One loss for Conor, one loss for Dan, it doesn’t mean anything.

Could it happen though?

So, even Bareman seemed to concede that there’s likely several hurdles in the way of a fight between ‘The Hangman’ and McGregor.

Since McGregor’s devastating loss, he’s already called for a third fight [5]with Poirier (as he stopped Poirier in their 2014 bout). Even if the UFC doesn’t want to go that route, it would be pretty surprising if McGregor’s camp took a bout with Hooker.

McGregor has repeatedly said he wants to have a rubber match with Nate Diaz at some point. If that also wasn’t an option, then you would think the UFC would likely table a bout with Justin Gaethje, before one with Hooker.

A fight with Tony Ferguson, who used to have the same management as McGregor, is another possibility.